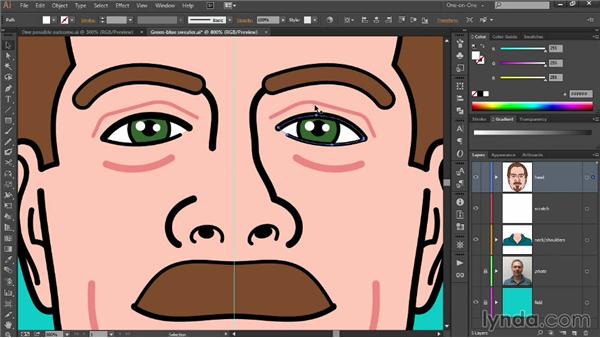 Join Deke McClelland for an in-depth discussion in this video Independently scaling facial features, part of Designing Your Own Online Avatar.

In this movie, we're going to fill in the background, and then we're also going to fill in the whites of the eyes. And we're going to make the eyes still bigger using what's known as the transform each command. So I'm going to start off by pressing Ctrl+0 or Cmd+0 on the Mac in order to zoom out, and I want to create a rectangle that exactly fills the artboard. And I'm going to do that by switching to the Rectangle tool. Which you can get by pressing the M key ad just make sure that everything snaps properly.

I'll go to the View menu and turn on smart guides or you can press the keyboard shortcut Ctrl+U or Cmd+U on the Mac. And now I've noticed that we have all these tiny green alerts. As soon as I hover the top left corner of the artboard. I see the word intersect and now I'll just go ahead and drag all the way down until I intersect with the bottom right corner of the artboard and that creates this big, ginormous, white square. I don't want it to be on the head layer. I want it to be down here on the bottom layer, the one called Field.

So, I'll go ahead and drag that little blue square all the way down to the field layer and release. And now I'll change the stroke, this second swatch, to none. And I will Shift+Click on the first swatch and I will dial in a custom color once again. This time it's going to have an R value of 80 a G value of 190 and a blue value of 200. And these are just colors that I came up with entirely subjectively. Now, just to make sure that I don't mess up that blue field in the background, I'm going to go ahead and lock down that layer by clicking on this Lock icon and now I'll switch back to the head layer in order to make it active and I'll go ahead and zoom in as well.

And, just so that I don't have all these green highlights coming up on screen, I'll go to the View menu and choose Smart Guides to turn them off because that is the end of my need for those smart guides. Alright, now I'm going to press the V key to switch to the Black Arrow tool. I'll go ahead and click on the top left eyelid. I'll Shift+click on the bottom left eyelid and I'll Shift+click on each of the right eyelids as well. Let's go ahead and move them to the scratch layer or at least copy them by Alt or Option+dragging that blue square down to the scratch layer.

Go up to the Control panel to the second swatch. Change it to none. Click on the very first swatch in the Control panel and change it to white and press the Escape key to hide that panel. Alright, now, this time what I want you to do is press Ctrl+X or Cmd+X on the Mac in order to cut those shapes. This is just the easiest way to work and then I'll turn the head layer back on. And I will click and Shift+click on all the eye shapes just to make sure they are all selected, and I will press Ctrl+B, or Cmd+B on a Mac, in order to paste them in back.

As you can see here, that is not far back enough. The green iris over here on the right-hand side is covered. So, I'll press Ctrl+Z or Cmd+Z on the Mac in order to undo that paste and I'll select the green iris shape because we now know it's the farthest back of any of the eye shapes. And I'll now press Ctrl+B or Cmd+B on the Mac in order to paste those shapes in back. And I'll Shift+click on the left hand eye, in order to deselect it. And the reason is that the right eye will eventually be in shadow.

And that shadow will reduce the brightness of the white of that eye, and just to take care of that in advance, I'll go ahead and Shift+click on that first swatch up here in the Control panel, and I'm going to reduce the red value to 200, I'll take the green value down to 200. If I were to take the blue value down to 200 as well, then we would have neutral gray, but I'll Shift+Tab back to it. I want a little hint of blue in the eyes, so I will press Shift+ up arrow to increase the blue value to 210. And then I'll press the Enter key or the Return on a Mac to accept that change.

Alright, I still want the eyes to be a little bigger. I've decided. And the best way to achieve that, to scale each one of the eyes independently according to its own origin point, is to use the Transform Each command. Let me show you how that works. The first thing I'm going to do is press Ctrl+Y or Cmd+Y on a Mac to switch to the outline mode. And that way, I can just marquee all of these eye shapes, except for the eyebrow, in order to select them. And I'll go up to the Object menu and choose the Group command, or press Ctrl+G or Cmd+G on a Mac.

And you may say, hey, wait a sec, Deke. You just got done telling us in the previous movie that groups are somehow bad. Well, I find it discomforting when Illustrator creates a group in the background without my permission, because nine times out of ten, you end up with garbage. In this case, I want a group because I want to keep these eye shapes together. Now I'm going to marquee the left hand eye shapes like so. And just a partial marquee is good enough. And I'll press Ctrl+G or Cmd+G on a Mac, in order to group them. Now, I'll Shift+click on any part of the right hand eyes to select all of them, since they're grouped together.

Now, let's say I want to increase the size of the eyes by 110%. If I were to double click at the scale tool, and enter 110%, like so. Then I would move the eyes apart from each other. And if I press Shift+up arrow, in order to increase the size of the eyes even more, they spread even farther apart, because they share a common origin indicated by this little cyan target. Which is not what I want. So I'll cancel out. If you want to scale each one of these groups independently of each other, according to their own central origin points, then you go up to the Object menu, choose Transform, and choose the Transform Each command.

And now notice, if I increase both the horizontal and vertical values to 110% and I go ahead and select this central point in this little reference point matrix right there. And I turn on the preview check box. You can see each one of these guys, each one of these eyes, scales according to its own independent origin point. And just to make that even more clear, I'll change this value to 150%, and I'll change the second scale value to 150% and you can see that they do not move away. Which is exactly what I want. Anyway, I want each one to be 110%, so I'll go ahead and change them like so, make sure Transform Objects is turned on and then press the Tab key, so you can see the preview complete and click the OK button, not Copy but OK, in order to scale those eyes.

And I'll go ahead and press Ctrl+Y or Cmd+Y on the Mac in order to switch back to the preview mode. And finally, I will go ahead press shift up arrow, in order to scoot the eyes up a total of two points, because after all, my keyboard increment is set to 0.2, and when you press shift along with an arrow key you multiply that value times ten. Alright, now go ahead and press Ctrl+Shift+A or Cmd+Shift+A on the Mac in order to deselect those eyes. And that's how you go about filling both the background and the eyes.

Not to mention how you scale each one of the eyes independently of the other, using the Transform Each command here inside Illustrator.