How symbols and instances work 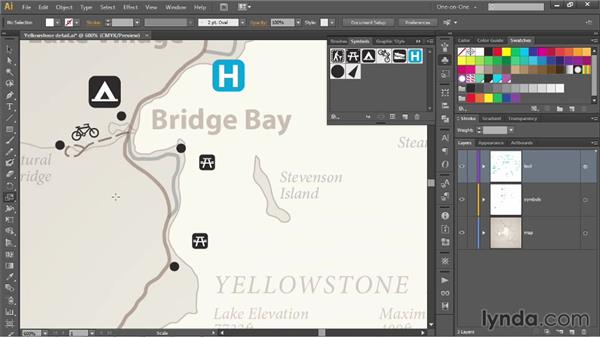 In this movie, I'll show you how you work with symbols, and I'll also show you why they are such remarkable time savers. I'm looking at a kind of dimmed out map of Yellowstone National Park. And you can see that I have a handful of these picnic areas that are represented by these picnic table icons. Now, as opposed to collecting these paths into a group, for example, and then duplicating the group to new locations, what we're seeing is repeated instances of a single symbol. And to confirm that's the case, I'll go up to the Window menu and choose the Symbols command.

Or you can just click on this little clover icon over here in the panel column. And notice that we do indeed see the picnic area icon here inside the panel. If you're working along with me, go ahead and click on that symbol and then go to the symbols panel fly out menu and choose select all instances. And that goes ahead and selects every one of the picnic table icons here inside the document window. Alright, now let's say you want to make a modification to the table icon. There's two different ways to work. One of which I consider the wrong way.

I'll show you that up front because it's very convenient, but it offers some down sides. And then I'll show you my preferred way of working. I'll start things off by clicking off the picnic tables to deselect them. Then I'll double click on any one of them. And notice that that brings up an alert message telling you that you are about to edit this symbol. And any modifications you apply will affect every single instance in the document. Now, if you don't want to see this alert in the future, you can turn on the don't show again check box. But I'm going to leave it off just to make a point here.

And now, I'll click okay. And notice that you enter this symbol isolation mode. So you only have access to the picnic area symbol, and nothing more. Now, what I find confusing about this mode, is that you're seeing the symbol in the context of the rest of the artwork. So you might be tempted to look at it, and say. Well, obviously, the picnic table's too big, and it's in the wrong location. So I've gotta fix that first. So you might just go ahead and marquee all the paths, because there's many independent paths at work here. And then switch to say the scale tool, and go ahead and drag while pressing the shift key in order to scale the picnic table proportionally.

And then I might press the arrow keys a few times in order to nudge the table into a better location. Now at this point, if you're satisfied with your changes, then you want to exit the symbol isolation mode and save your changes just by tapping the escape key. But you can see because everyone of the instances has been independently scaled, as a result, all of the tables end up getting smaller. And it's quite the chore to undo this, by the way, because you've gotta press Control Z or Command Z on a Mac several times in a row. The first time you press Control Z, or Command Z on the Mac, you don't actually undo your changes, you just go back to the symbol isolation mode.

Then you've got to press Ctrl > Z or Cmd > Z repeatedly until you get back to the original version of the table. And then if you're lucky, you'll be able to press Ctrl > Z or Cmd > Z on a Mac to return to the actual unmodified version of the illustration. Or, you may find that the keystroke doesn't work and you have to press the escape key in order to escape the symbol isolation mode once again. Either way, it's a pretty laborious process. Compare that with merely double clicking on the actual symbol definition, here inside the symbols panel.

In which case, you'll see the symbol independently of the rest of the artwork. So, it's not out of kilter in context, in other words. And notice that we don't get an alert message either, which saves a step. Alright, I'm going to go ahead and zoom in on my artwork and make an authentic change this time around. For starters, I'm going to change the color of the background, so I'll press the v key to switch back to my black arrow tool. And I'll go ahead and marquee around these shapes right here, because this background comprises two independent shapes. And then, I'll go up to the fill panel flyout menu here.

And I'll change the fill color to this swatch right here, C85 M10 Y100 K10. In order to produce this brighter background. I'm also going to adjust the position of these benches, just by selecting each one, and pressing the left arrow key in the case of this guy, and the right arrow key in the case of this one. And by the way, I've set my keyboard increment to one point, which we can see now that I've pressed Control K or Command K on a Mac, to bring up the preferences dialog box. So as a result I've scooted each bench out one point.

Alright, now that I've spruced up the artwork, I'll go ahead and press the escape key in order to exit the symbol isolation mode and return to the document. Now I can't really see what I'm doing here because I'm so far zoomed in and that's a function of having zoomed in inside the isolation mode. So I'll just go ahead and zoom out a few clicks here by pressing Control minus or Command minus on a Mac. And we end up with this effect right there. So I've been able to modify several icons at a time just by editing the definition of a single symbol.

And that, friends, is your first taste for the power of working with symbols here inside Illustrator.

Video: How symbols and instances work