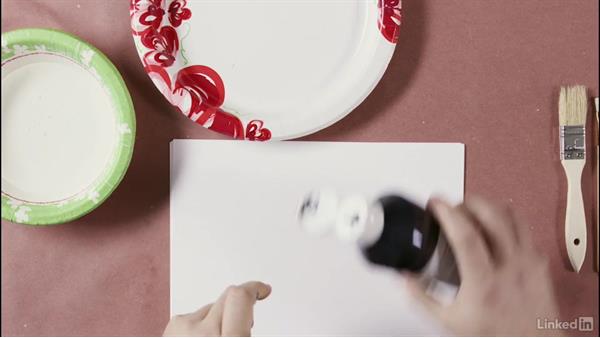 Learn how to use a simple paintbrush to create authentic looking hand-painted brush strokes. Von Glitschka does this with black acrylic paint.

- The term authentic means of undisputed origin or genuine. When it comes to artwork, authenticity simply means it resembles the real deal. When you create your own vector-based brushes in Illustrator, we're going for an authentic look and feel. To achieve this level of authenticity, we need to derive our brushes from a real world methodology. That means we're going to literally paint them with a paintbrush in order to capture true-to-life brush strokes we can then digitize.

A few years back I was approached by the local TEDx event and they asked me to brand it. The theme of the TEDx event was called Fearless. In the theme fearless is all about pursuing creativity without worrying about how or the possibility of failure. So I decided to approach that in a way that I normally never handle a logo design and that is to create it by hand. I want to share with you how that project inspired the ability to create brushes for Illustrator.

So I set out to hand paint all the letters I would need for the logo type I was designing for the local TEDx event called Fearless. This just shows a bunch of As that I painted out. I did a lot more iterations than this, but this just shows a page of As that I created. This is some of the Ss I created, and here's some of the Es I created. Now I painted out hundreds of these letters, but when it was all said and done, I then cherry picked the ones that I felt work best.

This shows how I pasted 'em up on one sheet, and I scanned this in. This became the final art for the final logo type of Fearless that the local TEDx event used. If you want to check out the digital art on this, you can go to the Exercise Files and you'll be able to zoom in and see how this was digitized. But now I want to walk you through the process of creating your own painted brushes. It's not complicated, it's very simple.

It first starts by having your own brushes. This first brush I want to show you, it's a nice brush but ironically it's too nice to paint with because it's not gonna create all the nice artifacts. So you don't want to use a nice brush like this. It's okay for other types of painting, but for this it's too nice, we won't use it. The only brush you really need is this one. This is just a one-inch simple paintbrush.

You can buy it at any paint store. I think this one cost me 89 cents. If you look at the bristles at the end, they're really kind of horrible, but horrible in a good way because, because they're so uneven, it's gonna create a lot of nice artifacting as you drag the pigment across the paper and that's what we want. So we're gonna be using this brush for sure. The other brushes I have here are just two smaller detailing type brushes, and these will form the line work brushes that we'll then use in Illustrator as well.

So I'm gonna go ahead and demonstrate how to paint out these brushes or dry brush with 'em to create the assets that we want to create. So that isn't complicated either. I like to use just simple white bond paper. You could use a textured paper if you wanted. That'd just give you more artifacts to work with, that's good too. But this is all we need. I like to just use a simple white paper plate to put my ink on. I'm using just simple black acrylic paint, and I'll just put some of this on this plate here.

If you're worried about getting paint all over your hands, you could wear surgical gloves as well. I usually do that at home so I don't get paint all over the place, but I'm kinda doing it without that today. But once you have paint loaded on your plate, I'm just gonna grab some water here. We're gonna mix it with some of the pigment. You don't want it to be too watery, just enough that it's gonna streak. So I think that's gonna work good.

You want to load the brushes. Kinda feel like Bob Ross here. Once you have that, you'll just drag it across and you can see how it makes those nice little artifacts and those streaks, and that's kind of what you want. It's not about painting nice, it's about capturing an idealistic looking paint stroke because that's what gonna work well. So I'll go back on some of these and just drag it a few times just to add some more artifacting to it like that.

I think that one looks pretty good, so we'll do another one. Now it doesn't always have to be so dense. You could make it really liney kinda like that. Sometimes I'll do smaller ones just like that. Those are always nice to have. So it's really up to you in terms of how you drag the brush, but don't press too hard. Just lightly let the bristles kind of form those nice lines and the negative spaces within the mark.

So I'll usually do a good 10 sheets of these. That one looks pretty good. And I like that. So there is no wrong way to do these. It's all about doing a lot of 'em and then you can go back and cherry pick the ones that look the best and that becomes your final brush set in Illustrator. So that's all I'll do for these. I want to show you how I'll paint some line work brushes, and we're just gonna use the small brush here to do this.

I'll do the same thing. Grab a little bit of water, a little bit of paint. What this is replicating and will turn into a brush in Illustrator is just to make an irregular kind of line brush that we can use on the perimeter of shapes. Once again, I'll just drag this just to create an imperfect line. This will wrap around the stroke of a shape and it'll make it look more organic. That's kinda the reason why I'm doing this. So these don't have to be perfect either.

I'll just experiment. I usually on these I'll push harder and thinner and harder so it's irregular in terms of its weight. So this is how I approach creating either a big paint brush or a line work brush like this. Once I've painted a lot of 'em out, this is what I end up with. I end up with sheets of these handpainted brushes and I'll actually tape 'em up. I'll cherry pick the ones that look the best, tape 'em up on a sheet.

So here's one sheet, here's another sheet. All of these appear in the course, by the way. They've all become assets I've used to create the artwork that I show in this course. This is some of the line work brushes I created. Now since you have your paint out, you don't have to limit yourself to just creating these brushes. Here's one where I just painted out the surface with the paintbrush before it dried out. This turned into a nice texture that I could also use. So it's up to you what kind of assets you want to create, but really isn't hard.

Now that we have all of our handcrafted brushstrokes painted out, we can now digitize them and turn 'em into useful vector assets for Illustrator. We'll do that later in this chapter.

4/19/2016
The precise, clean, and crisp shapes of digital designs work in many cases, but it is also possible to achieve a more organic aesthetic. Adobe Illustrator offers native digital brushes you can customize or expand to include your own imported, hand-painted brush strokes. Painting with vectors can produce a traditional appearance.

Graphic designer Von Glitschka appreciates the endless brush stroke freedom that real-world brushes offer, and he knows how to replicate this offering in the digital world. In this course, he shows how to create your own custom, handmade brush strokes and import them into Adobe Illustrator. Von demonstrates how to compile and use custom brush strokes to achieve both a hand-painted aesthetic and a personal touch. Whether you're a painter, a designer, or just a fan of Illustrator, this course offers instructions on how to expand your use of Illustrator.
Topics include: