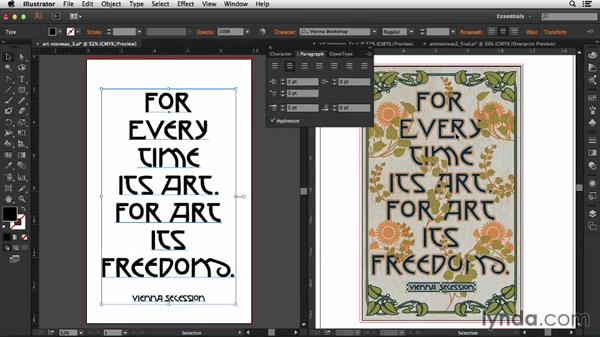 Join Nigel French for an in-depth discussion in this video Finessing the type, part of Designing a Typographic Art Nouveau Poster.

Continuing from where we left off, we are going to finesse the type on the left and get it more like what we see in the finished version on the right. This is going to involve kerning, tracking, spacing, and adding a ligature as well as putting a frame around this last line, vienna secession. So I'm going to begin by hiding my hidden characters, I don't need to see those. Any longer. Then I will select both pieces of type, press Cmd or Ctrl+T to bring up my character panel.

Here I'm going to change the automatic kerning method from metrics which is the default to optical. When I do so You'll notice that the spacing, the letter spacing, becomes slightly looser. This won't always be the case. It will vary from type face to type face, and whether or not you prefer metrics or optical will also vary depending on your own preference and the type face that you're working with. But in this particular case optical is what I prefer.

I'm going to make the letter spacing looser still By applying some positive tracking. And I'm going to change that value to ten. Now the reason I'm doing this, partly because I like how that looks and partly because you'll see that in the finished version we have strokes around the letters. So the letter forms are going to expand and I want to give them a bit of growing room to do so. Next I want to address the word spacing between "its" and "art" and between "for" and "art." And you'll see that the word spaces are currently, I think, too big, especially since the "A's" lean to the right, which makes them appear even bigger.

With the type still selected I've got to come to the paragraph panel and then to my justification dialog where I'm going to set the desired words by saying to be 50% of its current size but since the minimum words by saying cannot exceed the desired I have to make that one 50. First now I'll turn on my preview and we can see that's the result that we get. My next step is to add optical margin alignment.

This is going to factor in. The punctuation of the ends of the lines, which is currently slightly, visually throwing off the alignment. This is very easy to apply. From the type menu, just choose Optical Margin Alignment, and if you watch carefully, You'll see that the letters ever so slightly shift. Next, if we look at the finished version we can see that the e r is actually a ligature. Two characters that have been fused together essentially.

So I would like to use that ligature. It's going to depend upon the type face that you're using what ligatures, if any, you have available to you. But in this particular type face there are several extra ligatures. We can find out what they are using the glyphs panel. I'm going to select the ER, come to the type menu, and choose glyphs. And I can filter my view, in this case to standard ligatures. These are all the different combinations that we have. The only one that actually exists in our slogan Is this one so I'm just going to double click to insert that at the text insertion point.

Next I'm going to add a frame around the words Vienna Secession so I will zoom in so I can see that more clearly. Select it. The text is centered so we have the act point in the center. I'll choose my rectangle tool and I will draw from that center point holding down the Option or Alt key. And I'm now going to switch my fill and stroke properties by pressing Shift+X switch back to my selection tool and Reduce the height of that and I'm just now centering this visually over the type.

I want to change the stroke weight to 4 points and then I'm going to come to the effect menu stylize, round corners and I gotta apply a slight rounding off 6 points, 6 pt. I'll turn on my. Preview so I can see that. And I'll then select those two elements, the frame and the piece of type, and press Cmd+G to group them. Now zoom out. Next I'm going to adjust the vertical position of the type on the art-board. Horizontally, the type is where I want it to be.

But vertically, I'd like to shift it all up somewhat so that it's not actually perfectly vertically centered on the page. I'll come to my layers panel and I will turn on my grid. I'll select this first piece of type and drag it up from its baseline holding down the shift key. To about there. And I'll select this group. I'll do the same thing, bring that up to about there. Let's now turn off that grid. We can hide our panels and I would like just now to compare where we're at to where we started.

And over here in this window, I have the starting state of this document. So if I choose that, and I will then turn off the hidden characters, position that like so. So on the left, the type with the changes that we've made in this movie the kerning, the tracking, the optical margin alignment, the spacing. And the positioning and on the right the type where we began. Hopefully you'll feel it's an improvement.

3/6/2014
"For every time its art. For art its freedom." For turn-of-the-century Europe, its art was Art Nouveau, a style hallmarked by curved lines and natural forms like flowers and plants. After a period of respite, Art Nouveau reemerged in a big way in the 1960s and has remained in the designer's repertoire ever since. In this Type Project course, Nigel French shows you how to recreate a type treatment in the Art Nouveau style, using Illustrator, Photoshop, historically appropriate typefaces and colors, and ornamental elements that entwine with the letterforms themselves.