Exporting to Microsoft Office and PowerPoint 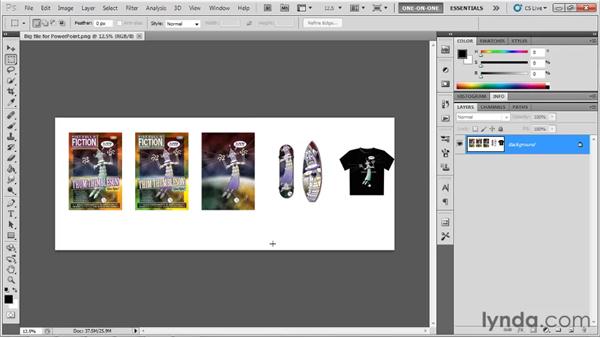 In this final exercise of the fundamentals portion of the series, and this may seem like a little bit of an anti-climax for a few of you. I'm going to show you how to export in illustration for using a Microsoft Office application. How awesome does that sound? However, this is going to be very useful for those of you who end up creating elements inside of Illustrator that you then place into PowerPoint. And so I have opened the Better type. ai file found inside the 12_exporting folder and I'm going to switchover to the forth artboard once again, the Skate & surf Artboard.

And let's say that I want to integrate these elements into a presentation. Well, I sure as heck don't need these Crop Marks. So I'll switchover to Layers panel, I'll twirl open the media layer. And the first thing I'll do is I'll turnoff the Static Crop Marks around skateboard by clicking on the eyeball in front of Crop Marks to turn them off. And then I'll scroll-down the list and I'll meatball this backboard item. And I'll switch to the Appearance panel. And I'll turn off the Dynamic Crop Marks effect. So that way I'm not deleting anything. I'm just hiding them for the moment. And I'm also going to marquee the side of the surfboard in order to get all the objects associated with that surfboard and I'm going to drag it over to the left just a little bit.

Alright, now I'm ready to export this artboard let's say. And I'll go up to the File menu and I'll choose this command right there, Save for Microsoft Office. Now I'm going to tell you in advance that this is the wrong command. This is not the way you really want to work, but it is the most obvious way to work. And Adobe created this command especially in response to the number two question that they were getting from their users. Now the number one request was, please give us multiple pages inside of Illustrator. That went on for about a decade by the way.

And we finally got multiple artboards inside of Illustrator CS4. But meanwhile, while that question was going on, question number two was, please give us a way to bring our illustration elements over into PowerPoint. So the Adobe team figured out that the best way to exchange information with Office applications in general was the PNG file format. And rather than having you get lost somewhere in the Export command for example, they created a specialty demand called Save for Microsoft Office.

It doesn't work worth beans, but it is here. And it does save your illustration as a PNG graphic. So I'll go ahead and choose that command and I'll name this Big file for PowerPoint and you'll see why I'm calling it big file in just a moment. It automatically saves out as a PNG document. That's your only option, notice Save as type PNG is all you got. You click on the Save button. And you wait. Notice that we have no options that are available to us whatsoever. I can't specify a resolution. I can't say whether I want to preserve my transparency.

All I get is this progress bar that's sitting here threatening to hang. Notice it's telling me Not Responding, which as I was saying, is not necessarily the end of the world where the CS5 applications are concerned, here under Windows. It may mean that the application is working very hard on doing what you asked it to do. And all of a sudden then the progress bar disappears. So what in the world was that about? Alright, let's go over to the Bridge by clicking on the Go to Bridge icon. And then inside the Bridge, I'll go ahead and grab that file, Big file for PowerPoint.png.

Well, already, pretty obvious, we've got some problems going. But I'll go ahead and double-click on it. And because I changed my file type associations, it comes up inside of Photoshop. It's a flat image. So no transparency was maintained. However, I do have each and every one of my artboards. Well, that's really useful. I mean, honestly Illustrator how wide you think my presentation is? It's going to take up several projectors here. But I'll go ahead and Shift+Tab away my right side panels and zoom in, so that I can see the various elements.

And notice that I have this fair amount of empty space at the top of the image. I have some space over here on the left hand side. I've got a ton of space at the bottom. What in the world does that about? And then I'm tight to the right-hand sleeve, interesting. And then finally we have a limited resolution. So illustrator's made whatever arbitrary determination about how many pixels we need. And I do have the occasional horizontal line going on inside of the head of the robot there in the surfboard and in the skateboard as well.

Alright, so what if you want more control than this, what if we except for the moment that Adobe's right, and PNG is the right way to go? PNG is that file format that's going to allow us to create the best looking graphics for Microsoft Office applications. Well, then we should use the Export command. So I'm going to go ahead and Windows tab my way back to Illustrator here. And I'll go up to the File menu and I'll choose Export. And I'll switch from PSD, which is the last file format I used here to PNG. And I'll call this Professional PowerPoint output, let's say.

And I'll specify which artboards I want to export. So I'll go ahead and click on Use Artboards. And as opposed to exporting all the artboards which I could, which will give me separate files, not one big galumphing file, I'll specify a range and that range will be artboard number four and nothing else. Then I'll click on the Save button. And I get a dialog box of options. My goodness, isn't that refreshing? And I can specify that I want a resolution of 300 pixels per inch or something else if I want. And I could set the Background to Transparent.

So I can maintain that transparency, or I could specify White or Black or some other color. So I have a fair amount of options there. How do I want to anti-alias this image? Well, once again, just as in the Save for Web dialog box, I could choose Art Optimize, which is that setting that's been giving me troubles with the horizontal lines, or I could choose Type Optimize, which is going to preserve the hinting that's associated with editable type. Well, I don't have any type inside of this artboard as you can see. However, I don't want to run into those horizontal lines. So I'm going to give Type Optimize a try.

And I'm going to leave Interlaced turned off. Then I'll click OK. And now I'll get another progress bar. And again, Not Responding, whatever, I'll just sort of sit here and cross my fingers and hope that Illustrator is actually going to survive this process. And it does. Alright, so let's go back to the Bridge and then I'm going to scroll my way down to this file right there, Professional PowerPoint output_skate & surf.png, because I exported that one artboard and nothing else. But had I exported the entire document each one of the images would be named for its artboard.

Alright, I'm going to go ahead and double-click on that guy so that we can see it here inside of Photoshop. And notice this is a much higher res file. I'm still getting a few of those horizontal lines which I might have to retouch here inside of Photoshop. But I'm getting much better detail. Check out that circle at the center of the skateboard wheels right there. If I switch back to Big file for PowerPoint.png and I zoom in on that circle, notice the level of detail we have there. Not much, we have a little bit of ghosting around the edges as well, as compared with these beautiful circles right there.

So if you have a mind to create elements for PowerPoint from Illustrator, then don't choose the obvious Save for Microsoft Office command, choose the Export command and save your image as a PNG file instead.