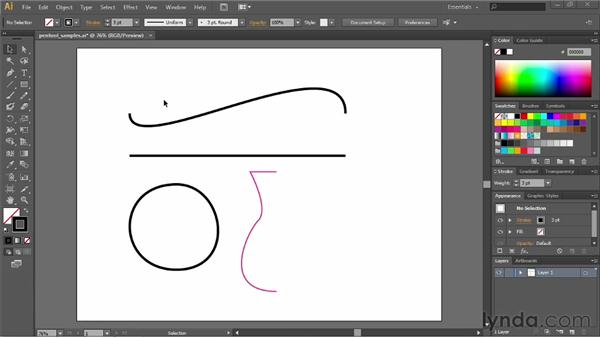 We've come to the point in this course where we're going to start exploring a tool that's either your favorite, or your worst enemy. It's called the Pen tool, and I'm here to tell you that it's not as scary as people make it out to be. So in this movie, we're going to explore some of the Pen tool options, and the ways that you can utilize the Pen tool to create some artwork inside of Illustrator. Now, you may be tempted just to go on past this movie, because you think the Pen tool is something that you just can't do, and that's really not true. Anybody can use the Pen tool. As a matter of fact, I think everybody should use the Pen tool, because you get so much control with the objects that are created with the Pen tool that, really and truly, you don't have to be precise at all.

I'll show you what I mean throughout this chapter. As you're looking at this piece of artwork that I have on my screen, you'll see several examples of basic lines and shapes that I've drawn with the Pen tool, the first of which is a curve. A curve is probably one of the simplest things that you can draw with the Pen tool. All you have to do is click, and drag, set another point, click, and drag. A straight line is also another easy thing you can draw with the Pen tool. You click once, you click somewhere else, a straight line appears. Basically, the Pen tool is nothing more than connect the dots, without the dots already being in place.

You're the one setting the dots, and drawing the lines. You just have to follow it in your brain. You can also draw closed paths, like this circle here at the bottom, and you can draw things like this shape down in the bottom right-hand side. You may be wondering exactly what I was going for here. Let me explain. You can take the Pen tool, and draw basic two-dimensional artwork, like what you see here, and then convert it into something that's very amazing, and three-dimensional. Let me show you how easy that is.

I've basically drawn half of a vase here, and with this vase, I can select it, and then I can go up to the Effects menu, and go to 3D. When I go to 3D, I can choose Revolve. I'll move this out of the way, and I'm not going to spend any time talking about the options in here, but when I turn the Preview on, look what happens to that vase. It automatically turns into a three- dimensional object that I'm then able to move, and rotate around inside of Illustrator. This is great for product mockups, or anything else that I might be working on.

All I had to do was draw the basic structure of it with the Pen tool, and I did that with a couple of straight lines, and a couple of curves. Pretty neat. When I'm finished, I can hit OK, or hit Cancel to get back out. At its core, it's nothing more than that basic path that I drew with the Pen tool. It's a really great tool that can create some great artwork if you take the time to learn it and master it.