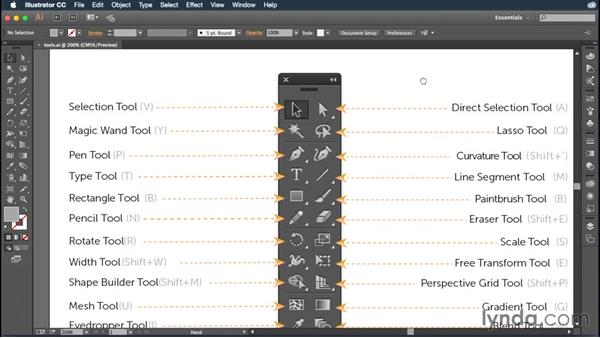 All right, let's start off by talking about the tool groups that we have. I mentioned previously that we have the selection tools up here, we have the type and brush tools here in the middle, we have some transformative tools here in the next group. We have what I call some informational tools down here in the bottom including some eyedropper tools, things like that. We also have some color manipulation tools and the gradient tool. Really, this grouping is full of different stuff so I don't have a real broad name for this, but in general, this is just where you find a lot of color information and manipulation tools.

We've got our symbol and charts tools. Then at the bottom, we've also got some navigation and document control tools. Underneath all of that you'll find your color controls and also the color modes and then down here you've got drawing modes and screen modes. Let's talk about some of the individual tools that you probably need to familiarize yourself with right now. The ones that are most important. I'll zoom in on this document, and I did that by pressing Command-plus on the Mac, Control-plus on the PC, and then you can just scroll up and down in the document till you get to this section right here.

So, basically, the main areas that you need to worry about right now at the very beginning are the tools towards the top. So, that includes the Selection tool, which is the black arrow, the Direct Selection tool, which is the white arrow, and don't worry if you don't know what that does right now, because we'll cover it in its own movie a little bit later on. We have the Magic Wand tool and a Lasso tool, those allow you to basically select objects on the screen at any given time. We have the Pen tool, which I know is probably the scariest tool in Illustrator, but later on when we talk about it you'll see that it's not quite as intimidating as you might think.

We have a newer tool that's been added recently to Illustrator, it's called the Curvature tool, that allows you to draw really easy curved lines in Illustrator. We have the Type tool. We have our Shape tools which is, starting off here, it's the Rectangle tool, but if you were to click and hold on that section it would show you the different tools like Ellipses and Polygons, Stars, and things like that. We have our Paintbrush tool which you will use when you are creating brushstrokes. The Pencil tool for freeform drawing and then an Eraser tool that allows you to easily erase mistakes that you have made on any of the pads that you're doing while you're working.

So, the rest of these tools, we're gonna cover most of them throughout this course, but the ones at the top that I just discussed, basically everything from the Selection tool down to the Eraser, those are the ones that you need to really familiarize yourself with for now. I want you to learn where they are, learn their keyboard shortcuts as well, so that you can quickly and easily switch between them. I've gone ahead and annotated all of the keyboard shortcuts here in this document. You can take some time to study that, and you can also go over to the Tools panel and just sort of click around to make sure that you're hitting the right tool when you think that you need it.