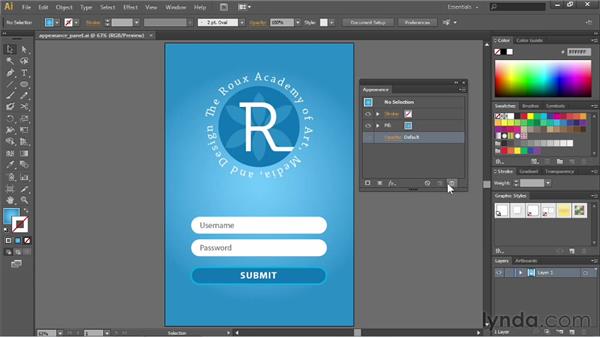 So far throughout this course, we've been discussing various ways to change the appearance of objects that we've created here inside of Illustrator. However, up until now, we've been doing it in a rather primitive fashion. Now it's time to explore something called the Appearance panel, so you can see how you can utilize it as a one stop shop for altering your object appearance. In order to find the Appearance panel, you're going to have to come over here to the right-hand side in your panel groups. The Appearance panel lies next to something called Graphic Styles, and I am just going to click on it, and drag it out into the window, so you can see it a little better.

If you don't see the Appearance panel on your screen right now, you can go up to the Window menu, and you can choose Appearance. You can also press the keyboard shortcut Shift+F6 to bring up the Appearance panel as well. The Appearance panel is basically like a giant Control panel for each individual object that you work with inside of Illustrator. It shows you various attributes that are associated with your object, and it allows you to target and change them at a moment's notice. You get control over the object's opacity, its fill, and its stroke, as well as all of the effects, and other things that you do to your objects here in Illustrator.

Let me expand this out, so you can see a little bit more of it, and let's go through the Appearance panel. The first thing you will notice at the top is that it says No Selection. That's because I don't have anything currently targeted on my artboard. Once I start selecting artwork, it will then read the appearance of that object, and display it below. Directly underneath, where it tells you what it has targeted currently, you'll see the attributes. Right now, it's showing a Stroke on top, and a Fill underneath. It's also showing an Opacity control right beneath there. Any time you see an orange link with the little dots underneath it, that means you can actually click on that, and temporarily access the panel that goes along with it.

So for strokes, you can click here, and it expands out to show you the entire Stroke panel. Same thing for Opacity. If you click here, it will pop up, and show you the full Opacity panel. Clicking it again closes it. The bottom of the Appearance panel contains several different options, like adding a new stroke, adding new a fill, adding new live effects; you can clear the appearance of an object, duplicate a selected item, and also delete a selected item as well. When we start talking about targeting, and moving specific attributes around, I will show you how to use all these tools at the bottom.

For now, though, let's worry about reading the Appearance panel, so we can understand exactly what all this information means. I am going to make sure that I have my Selection tool selected, and I am going to click right here on the background element of this file. Once I do that, you're going to notice that it says Path here in the Appearance panel, indicating that I now have ahold of a single path inside of Illustrator, and that's this rectangular path that makes up the background element. It also shows me that currently I have no stroke associated with this path. I also have a Fill, and the fill is this blue to light blue gradient, and it's being displayed right there.

Any time you want to get more information about the attributes in the Appearance panel, you can toggle this little white triangle here. Clicking on that expands down to show you different options. For the Stroke, for instance, there's an Opacity control. If I expand on the Fill, it also shows an Opacity control. So the great thing about the Appearance panel is that you are able to control each individual attribute separately. You don't have to worry about adjusting the overall opacity of an object; you could come in and simply target the Fill Opacity, or the Stroke Opacity. Let's collapse these back up. Let's look over here to the left.

On the left, you'll see a small eyeball icon. This indicates the visibility of the current attribute that you are working on. For instance, in this particular document, if I were to turn off the visibility for the Fill, you would see that, temporarily, the Fill is hidden. It's not gone; it's still a part of the object. You can see it right there, but I've temporarily hidden its appearance by going ahead and clicking on that little eyeball icon. If I click on it again, the Fill is simply restored. The final thing that I want to make you aware of inside of the Appearance panel is the Appearance panel menu. That's up here in the top right corner.

When you click on that, you'll have the ability to do several different things, like add a new fill, add a new stroke, duplicate an item, remove an item, clear the appearance, reduce to a basic appearance; you can also choose to hide the thumbnail of whatever you're working on, and you can show all hidden attributes. If you happen to be working on a graphic style, you can redefine a graphic style from here as well. When we talk about graphic styles, I'll explain exactly what that means. For now, though, let's click away from this, and I'll take the Appearance panel, and dock it back with the Graphic Styles panel over here on the right.

Like I said at the beginning of this movie, you should treat the Appearance panel as your one stop shop for controlling your object's appearance inside of Illustrator. If you utilize the Appearance panel, there is no reason why you should have to ever go to several different tools in order to change things like fill, strokes, and effects. You can do it all from one central location.