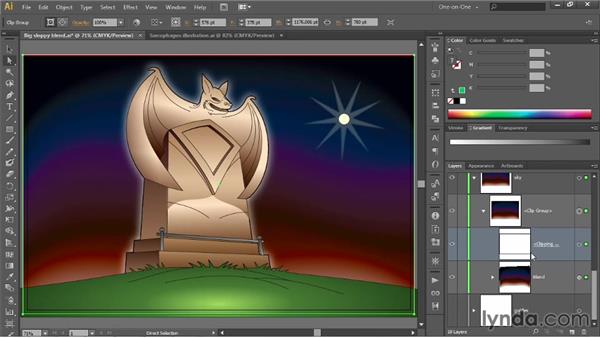 Join Deke McClelland for an in-depth discussion in this video Establishing a clipping mask, part of Illustrator CC 2013 One-on-One: Advanced.

In this movie, we're going to take our big Multi-color Blend and we're going to place it inside of a Clipping Mask, so, here's the idea. I'll go ahead and Zoom Out a click, actually a couple clicks here, in order to take in this big, huge Blend here. And notice that it not only exceeds outside of my art board, but it exceeds outside of the bleed indicated by that red rectangle. And what that means is there's not really any reason to clip this Blend. Because after all, Illustrator is going to naturally crop the Blend inside of the bleed.

But let's say, for whatever reason, it's important to you that the Blend exists inside of a rectangle. I'll go ahead and twirl open the Sky layer, down here, close to the bottom of the Layers panel. And notice that I've got this rectangle right here, this green rectangle, which we can see if we hide the Blend for a moment. And then we've got the Blend in front of it. Anytime that you want to place something inside something else, you want to create what's known as a Clipping Mask. And the thing that's going to serve as the clipping path, that is, the thing that's going to do the cropping, needs to be in front of the stuff that's going to get clipped.

So in our case, the Clipping Path is this green rectangle here. And, the Blend is what's known as the clipping contents. So, I'm going to go ahead and grab that green rectangle, the path item here inside the Layers panel. And I'm going to drag it,and drop it on top of the Blend. Then, I'll Meatball the path in order to select it and I'll Shift+Meatball the Blend. So both of these items are selected here inside the Sky layer. And now I'll go up to the Object menu, I'll choose Clipping Mask, and I'll choose Make. And it has a keyboard shortcut of Ctrl+7, or Cmd+7 on a Mac.

Anyway, hate to belabor it, but just want to give you a mnemonic in case you want to remember this shortcut because this is a very useful command inside Illustrator. So I'll go ahead and choose the command, and bang just like that we place the Blend inside of the group. Check it out. Alright, so I'm going to press Ctrl+0 or Cmd+0 on the mac to Zoom In. And then I'll twirl open this new item here that's called Clip Group, indicating that this is a Clipping Group. And inside of the Clipping Group we have this item right here, which is by the way, if I double-click on it you can see it's called Clipping Path.

And so that is the path outline, the rectangle, that's clipping the Blend. Notice that the Clipping Path immediately loses its fill and stroke attributes. You can bring it back if you want, but you do lose them initially. And then finally, we've got the Blend inside the Clipping Path. And if you twirl it open, might as well as long as we're here. You can see that we've got all six of our path outlines. The light blue one, the red one, the brown one, the purple one. The dark blue one, and the rich black one. And then we've got this item right here. And if I go ahead and Meatball it, you can see that it's a path that has six anchor points on it.

And this is a path that Illustrator created automatically. And it is the path of the Blend, it determines how the various colors blend into each other. And it's what's known as the Spine. In fact, I'm going to go ahead and double-click on that item there and rename it Spine, because that's what it is. And I want to show you a couple things about a Blend. I'm going to Meatball the entire Blend there and I'll press Ctrl+H or Cmd+H on the Mac in order to hide those selection edges so we can better see what's going on. Then I'll go up to the Object menu, I'll choose Blend. And I want you to notice these two commands, to which I assigned custom keyboard shortcuts.

So if you loaded Dekes in the previous chapter, you'll see that Reverse Spine has a shortcut of Ctrl+Shift+Alt, or Cmd+Shift+Option+, and Reverse Front to Back has a keyboard shortcut of Mash Your Fist Right Bracket. So, if you reverse the spine, you're going to reverse the direction of the spine. And that's useful if your Blend ends up going the wrong way. So if I choose that command, you can see now everything's upside down. The rich black is at the bottom, and then the dark blue, and then the purple, and then the brown, and we can't even see the red and the light blue, because they're outside the rectangle.

Alright, I'll press Ctrl+Z or Cmd+Z on the Mac and in order to undo that change. Your other option there, if I go back to the Object menu, choose Blend and choose Reverse Front to Back, that's going to change the order of the color. They'll remain in the same physical position but their stacking order will change. So, that in our case, the light blue here is going to be in front of the red, which is in front of the brown, which is in front of the purple and so forth. And that emphasizing that light blue way too much plus, if I press Ctrl+H or Cmd+H on the Mac, you can see that most of these shapes are fairly straight on top.

And so that ends up returning us to a linear gradient, essentially. Because all the wavy action is at the bottom of the path outlines. Alright, so I'll press Ctrl+Z or Cmd+Z on the Mac in order to undo that change. But the good news is if I press Ctrl+Shift+A or Cmd+Shift+A on the Mac, we have managed to place the Blend inside of a rectangular Clipping Path. So that everything is nice and tidy, just as it is with the gradient, so we don't have a lot of excess path out lines inside the artwork. And that folks is how you establish a Clipping Mask, by placing a Blend, in this case inside of a Clipping Path, here inside of Illustrator.

9/24/2013
This course is the third in a four-part series devoted to mastering the premiere graphics creation application, Adobe Illustrator. Industry pro Deke McClelland takes a project-based learning approach to the key features in Illustrator CC, including Recolor Artwork, transparency, masks, blend modes, strokes and fills, and dynamic effects. The course also covers techniques for creating custom gradients, designing logos, generating photorealistic neon text, and wrapping type around objects. Plus, Deke shows how to call up the most essential features by organizing your workspace and employing time-saving keyboard shortcuts, how to manage the color settings, and how to adjust a few settings to make the program work even better.
Topics include:

A: Deke updated 7 movies to reflect changes in the 2014 version of Illustrator CC. The movies cover Illustrator preferences, updates to blends, and more. Make sure to watch the revised movies (marked "UPDATED") to stay up to date.