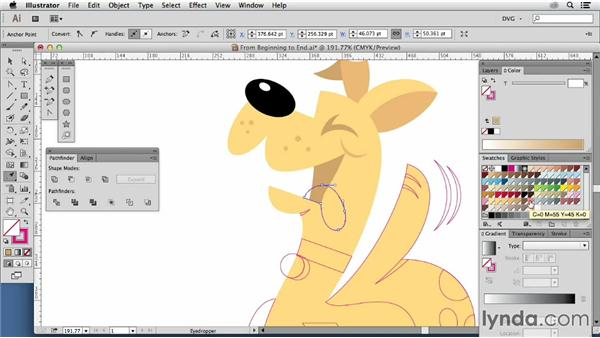 Join Von Glitschka for an in-depth discussion in this video Establishing base colors, part of Artist at Work: From Sketch to Finished Vector Illustration.

Now that we have our base vector shapes established as shown here, there's one thing that I usually do when I am working on any project when I get to this stage. I'll select all my vector paths, I'll clone them, Cmd+C and Cmd+F. I'll group them. So if I grab this and move it, you can see it's a grouped item. And I will move them to this layer which is called x.

I just call it x for no reason than I don't really have a specific name for it. What the purpose it serves for me is, it's an insurance layer, so this is now my core base vector shapes, and this is just a copy of those. So now as I move forward and I colorize my base vector shapes, if I ever want to change something, or go back to the source shape, maybe I might edit something slightly. Those are always there. So it's just this more of a safety precaution than anything.

And at this stage, I usually do a save of the document just to make sure that it's there. Because if I start coloring, and let's say Adobe Illustrator crashes, and everybody knows that's known to happen from time to time. It's saved my bacon a few times where I've gone back and I've been able to recover something. Because even with backup systems like Time Machine, it doesn't always back up before it crashes. So anyway, that's just a good creative habit I've gotten into.

So now with our base factor shapes established, I'm going to start coloring this character. This dog, in my mind I'm kind of thinking he's a lab. I like golden labs so I think that's the color scheme I'm going to go with. And I'll just start with the nose. And we'll go ahead and colorize that. And I'm going to zoom in on his face so you can see what's going on a little better. Bring those in front. This being a highlight, obviously it's going to become white.

And this base shape of the dog, make sure that's behind everything. And I think we'll try this color. This might, yeah, that looks kind of good. And, so you can see, it's going to be a golden lab. And we'll go to his whiskers. And since the base color was that, or was it? Actually, we're going to, we're going to fuse these together into one shape.

Okay, that's a little darker but I actually want it more dark, and I think that looks better. On his eye we're going to, it might work for that. That's a little too light. We're going to go to one shade more in the tonal family And I think that looks good, too. I think because top of his head will match, or top of his ear I mean, will match that, and because this is a darker area, we'll try that.

You'll see that once I have the color established, if I'm coloring something else. Let's go back to yellow. I'll just go over and grab the color from there. And that's just with the Eyedropper tool which is right over here in the Tool palette. It's just faster than if I have the shape and I click it, then I go over here and I click this shape. You know, if I just keep my Eyedropper tool, I can just sample any color and it just makes it go a little faster.

So, I like doing that. It just, it works good. And now we're going to, this color might work there. And then since this is further back, we're going to do that. So, I'm using color there to kind of create depth. You know, the further back the color, the less intense the color, and the more muted. So that's why I did that. So I think that looks pretty good. We're going to color this probably the same color as his whiskers. I don't want it to compete with the eye too much.

And on the mouth, maybe that color. It's a simplified illustration so I'm not going to do a whole lot of rendering in terms of gradients and shading and stuff, because the style is purposely simplified. That's kind of what makes this a nice style. So I probably won't get into that too much. I might add a little of that but just not get crazy with it. So that little wedge shape we created, we just picked up the color from that. And, now that I'm looking at it, I think I'm going to clone this shape.

We'll paste that behind, Cmd+B. And to create that illusion. Now I'm going to come back in and put a little more detail in the ears. Both the back ear and the front ear a little later. But for now these are, I'm just trying to establish the base coloring. So that looks good so far. This would be of course the same color as the base color of the body but, because it's moving, we want to make sure that it's not the full strength of that color.

So, we will go up under Color, for fill, and because it's once again, if we go to our Swatches, it's a global color. We can go up to the Color Fill and we're going to hit that as, the further away from the foot, meaning, more time has gone by. So this would be less intense. So we're going to make that like 50, maybe 45. Like that, and then this one we'll make like 70 or, let's go 55.

We'll match it using the eye dropper with this one. And, I think these will work for the claws detail as well. That looks good. Then we'll select these, I don't want these to be super, I don't know, maybe, maybe this will, this same shade will work. I might get back to that and change that a little later, but for now we'll just leave it right now. I'm going to select these. This front leg I'm going to color it light, once again just so I can see it. I'll color these those just for now. The same with this one.

And this back leg I'll color that and I'll send to back. So I'm just trying to get a base coloring going. And then from there I'll go in and detail out what I need to. So the fundamental principles of the colors are almost in place. I think we will color this one, red. And this, I'm not going to color it red, I'm just establishing a fill without any stroke before I select any definitive color.

Now I'm going to use gray, a lighter gray there. We'll make that a darker gray. I think that looks good. So, you can see how this can move along pretty quickly once you have your base vectors done. It's all about focusing on the color and how it balances with one another at this point. I don't have to worry about the form, because we dealt with that actually, when we drew it out. And, then we built it based off of that drawing.

2/18/2014
Von Glitschka is known for his witty, colorful illustrations, logos, and design work. But how do his drawings make it from refined sketches to polished pieces? This installment of Artist at Work enables you to follow along with Von's coloring and shading process, as he transforms this vector-based graphic in Adobe Illustrator. He starts with a scanned sketch and builds out the basic vector shapes. He then adds shading, highlights, and color—the finishing details that make his illustrations so extraordinary. Von's methods are simple to follow and will help create a new level of depth and richness in your own vector creations.