Editing a path as you draw it 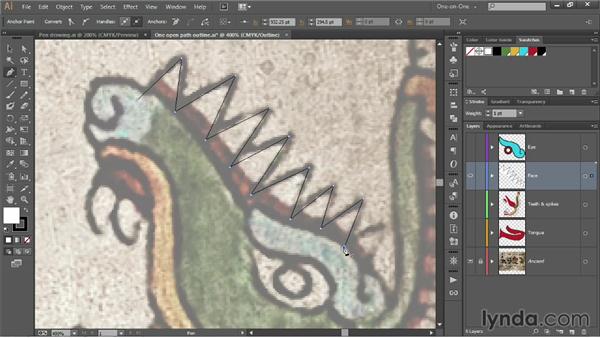 In this movie I'll show you how to modify the position of anchor points on the fly by temporarily accessing the White Arrow tool. And this is a heck of a trick because it means that you don't have to get everything right in the first place, after all, that's impossible. It also means that you don't have to draw and edit in independent passes. You can draw and edit together on the go. But first, just in case you're encountering a problem, if you were to just open this progress file and select the Pen tool, you'd get this cursor right here. And that's because an invisible layer is selected, in which case I don't want you to be frustrated. Just go ahead and click on the Face layer and all will be better. Now we've got that green inactive Pen tool cursor which means we need to wake up the path outline again, and I'll do that by positioning my cursor over this end point, and you can see I now get the blue awakened cursor with the slash. And I'll click, and now I've got the black active cursor, and I'll click here, and here, and that's good for now.

But let's say I look at some of the points that I've already laid down and I think they could be in better position, and one of these want to go up into the right a little bit. But we've seen how nudging an anchor point using an arrow key can deactivate the path outline. So, you're better approach is to use the White Arrow tool which doesn't deactivate. If you access it on the fly by pressing and holding the Ctrl key, or the Cmd key on the Mac. Unfortunately, pressing and holding Ctrl or Cmd gets you the last arrow tool that you used, which in my case is the Black Arrow tool, and that would be a disaster. If I click on a path outline with a black arrow, then I'd select the entire thing and I'd deactivate the path outline and so forth.

So, one way to work is to switch manually back to the White Arrow tool, which of course you can get by pressing the A key. And then that way it becomes the last arrow tool selected and now, you can return to the Pen tool and keep drawing. But again, as you can see here, problem is I've deactivated the path, and I have to wake it back up. Now that's not a huge undertaking of course, but it's an extra step that I'd rather not deal with. So, I'll go ahead and reactivate the path here, just so you can see the difference between this next operation. Now, notice if I press and hold the Ctrl key, or the Cmd key on a Mac, I get the White Arrow tool on the fly, and that way, I can grab some of these anchor points and move them to different directions like so.

And as soon as I release the Ctrl key, or the Cmd key on the Mac, I'm back to the active pan tool cursor which means I can add still more anchor points if I want to. So, what do you do then if pressing and holding the Ctrl key or the Cmd key on the Mac gets you the Black Arrow tool, like it did for me. Is there a way around all this deactivation? And there is, it's one of those secret handshakes in Illustrator, almost no one knows about this one. And it's a keyboard shortcut that is very different on the two platforms. If you're working on a PC, you go ahead and press Ctrl+Tilde and then Tilde key is that guy in the upper left corner below the Escape key on a US keyboard. And notice that switched me to the Black Arrow tool, if you press Ctrl+Tilde again, and I'm keeping the Ctrl key down the entire time, I'm just tapping the Tilde key, then I go back to the White arrow tool.

You folks working on the Mac, you've got your Cmd key down and you add Option and Tab. So, it's Cmd+Option+Tab in order to switch to the Black Arrow tool and then it's Cmd+Option+Tab again to swtich back to the White Arrow tool. And with that key still down, with the Ctrl key or the Cmd key still down, then you go ahead and drag your anchor points into more desirable positions like so. And then when you're done editing you can just release the Ctrl key, or the Cmd key on the Mac, and you go back to an active Pen tool.

And so just remember that shortcut if you can. It's Ctrl+Tilde on the PC and it's Cmd+Option+Tab on the Mac, in order to switch back and forth between the Black and White arrow tools. Once the White Arrow tool becomes the last tool you used, you could press and hold the Ctrl key or the Cmd key on the Mac and drag your points in order to move them to more desirable locations.

Video: Editing a path as you draw it