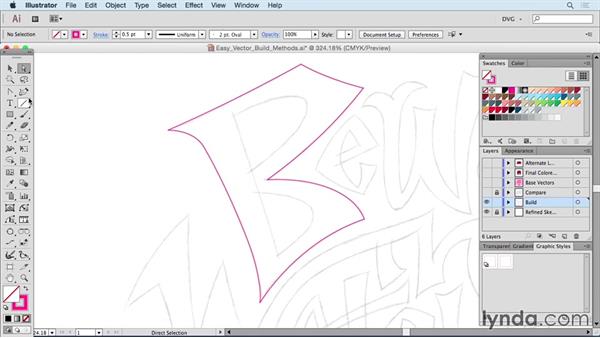 - Once you have your lettering drawn out and refined, it's just a matter of craftsmanship to produce the final vector artwork. Having a tight, refined sketch will aid in this effort, but it still takes a distinct dedication to execute your vector building with care and precision. Let me show you how I created my final vector art based on my refined sketch. So, previously in the course you saw me begin this design in a rough drawing stage, and then I moved to a refined drawing stage.

And that refined drawing is what I'm now bringing into Illustrator, that's gonna help me and guide my vector building. When I scan in a TIFF image such as this, it's about 600 to 800 dpi. I use both on and off, and it just depends on how big I wanna build the design at 100%. In this case, I believe this one was 800 dpi. Now, the first thing I do is once I place a TIFF image into Illustrator like this, I put it on its own Layer, you can see Refined Sketch over here, and I usually adjust the Opacity.

In this case, I think we'll do 20%, and then I lock the layer because I don't want it moving on me. On a layer above it called Build is where I start building. Now, I already have predefined Graphic Styles set up, and all this is is a magenta stroke. Either a 0.5 stroke or a 2.5 stroke, and it just depends on how zoomed in I am on my art as to which one I'm gonna use. When I create and start building vector art, it's always good to zoom in.

I never try to stay all the way away and try to build my art, because it's like standing across a room and building it. So I'm just gonna start laying down my Anchor Points, and with a design like this, anywhere the art gets to a point, that's how I discern where I'm gonna start building and how I'm gonna start adjusting my shapes. You can see how I've done that here. And now, because I have curves in this line here, I wanna use another anchor point right about here, and we'll pull out the bezier handles.

So we're gonna click here and pull out, and then we'll end it here. So that's how I initially create what I call my rough build. Now, right now I have what's called Smart Guides turned on, you can see how it's telling me there's an Anchor Point here, this is a Path, and those are great when you need to use them, but when you don't need to use them, they can kind of get in the way. So you'll wanna toggle those on and off as you create. In this case, we can go Command U, and turn them off.

So if I go over the Anchor Point it'll no longer do that, and it'll no longer tell me when I'm over a path. Therefore it's not gonna snap to them like it did previously. We're gonna go over to, let's see, under the Pen tool. We'll click and hold. We're gonna go to the Anchor Point tool here. And once you have this, this is where Adobe has added in, you can see the little indicator that comes up where you can edit segments. So you can actually grab on a Path and just pull it out, and start to kind of mold and shape your artwork, in this case to what I've drawn out.

So that's all I'm gonna do here. And then you can also adjust your beziers as you go along. I try not to use it to pull in all the way. I'll pull it enough to give me access to the bezier handles, and then I tend to use those to guide me from that point. Now, on this one I can use the existing bezier handle to get that. And I think I'll be able to use it on this one as well.

So there's my base art for the outline form of the B. And all that's left to create now is just the inner form of this letter shape. So we'll go back to the Pen tool. We'll go here. Anywhere if you think of a clock in your mind, this is 12 o'clock, this would be 3 o'clock, just pull the anchor handles out as far as you need to access them. Don't worry about getting them exact. Then we'll come down here. Click these once again.

If this is like 12, then this would be three, that kind of helps you figure out where to place the Anchor Points. Don't worry about this. We'll kind of clean that up as we go along. Now what we'll do is we'll switch back to this tool, and we'll pull out these bezier handles. And we'll pull this one out like this, and this one we'll do the same.

Now, I don't like leaving absolute straight lines in my designs. Nothing in nature is perfectly straight, so I like to, even if it's just very subtle, I'll go ahead and I'll bend it just so it's not perfectly straight. Nothing looks more computer-driven than an absolute perfect straight edge on a somewhat organic, in this case, a hand-lettered design. So it's good to have those subtle curves in there. Now with this created like that, I'm gonna go ahead and use the Pathfinder palette.

So we'll open that up, and we're gonna fuse this into one shape here. And then that'll allow us to now go back in and just delete the shape we don't need. So that's how I'll create all my art for this design. So if I zoom out on this you can see how we've just created the letter B. Let's zoom in a little more. I've gone ahead and created all the base shapes for that, so you can see how those look.

Now, even though these were my initial Build vectors based off of my underline drawing here, it's not that I don't have the flexibility to make improvements as I go along. If I turn on this Compare layer you can see how, we'll zoom in on the E, that's one of the most obvious ones, where my initial drawing aligned with my sketch, but as I saw how it compared to other letterforms I realized it would look better if I adjusted it as I go.

So making those kind of improvements as you move forward is how you improve, in this case a hand letter design, but that applies to any type of design. So you can see anywhere where it doesn't align, I've improved the shapes as I moved forward, such as on the A, this other E, this R, the S. I made a lot of micro improvements along the way to improve the overall design. Now if I go back to the complete design, you can see how that came out in color here.

This is, once again, a T-shirt design for my friend's band, Beware The Watchers. And I like the character that I came up with for this. Now, also in the previous movie, you saw me draw out an extra piece for it, and that is like a secondary usage, and that's what you see here where I took the inside letterform of the R, and it kind of plays off of the term "Watchers", and I gave it an eye. So, not all projects are gonna need the final art to be so clean and precise, but in context of branding most will.

So knowing how to move from an analogue drawing, and then build it out with precise craftsmanship is a skill that will serve you well for your entire career. Whether you're creating a hand-lettered design, such as this, or any other design for that matter. I cover all these systematic build methods and the ideation that drives them exhaustively in my course Drawing Vector Graphics on lynda.com