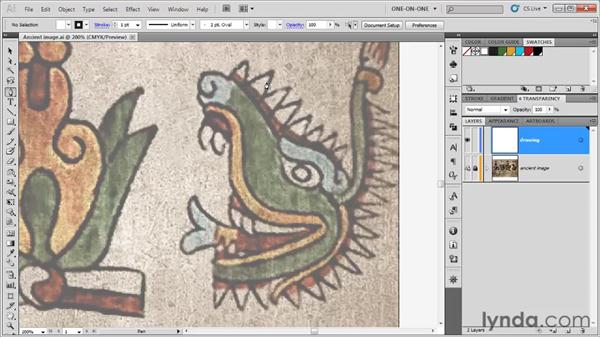 There are some slight differences between the various programs. However, Illustrator's Pen tool is where it all began. This tool is 23 years old now, and going on strong, quite frankly. So, here is what we are going to do. We are going to take this image, and I have opened currently inside of Photoshop, it's called Flint rain flower crocodile.jpg, found inside the 09_pen_tool folder. These are the first four day signs of the Tonalpohualli, that Aztec Spiritual Calendar. So, we have got Flint over here on the left, carrying this very interesting handbag, notice that.

And then we have got the strange looking Rain, followed by Flower and then finally Crocodile. Now, this arcane image here is sort of my attempt to the kind of Da Vinci Code. Notice, that we've got this strange little cubic icon in the middle of these orange circles, and then down here underneath the crocodile, we have this interesting cursor. It says, if the graphic is just begging us to trace it with the Pen tool, and so we shall. So you can trace anyone of these day signs that you like, including the very strange brain like Rain God here.

However, I am going to be tracing the crocodile, because I think he is the most fun. So, I am going to go ahead and switch over to Illustrator, and I have got open this illustration, it's called Ancient image.ai, also found inside the 09_pen_tool folder, and what I have done is I have gone ahead and set up a tracing template in advance. So I have just taken an image we saw a moment ago inside of Photoshop, I have slapped it inside of a new illustration file, converted it to a tracing template. Added a Drawing layer, make sure your drawing layer is active here inside the Layers panel, and let's go ahead and start using that Pen tool.

To select the Pen tool, you have to click on this fifth tool down in the Single Column tool Box or you press the P key, and then you start clicking away, that's the simplest way to use the Pen tool. So, if all you want to do is create freeform polygons, and you can actually get pretty far using that approach if you like. Then the tool is very easy to use, just click to set at Anchor Point, click again, and Illustrator joins the two Anchor Points with the straight segments, and you just keep moving through your illustration. It's when you need to create curving segments, that things get a little more complicated.

Anyway, I am going to go ahead and zoom in on my crocodile right here, and let's start things off by creating this row of spikes along the top of the creature's head. Now, it's oftentimes difficult to figure out how to approach a given graphic, even if it's a fairly simple cartoony graphic like this one here, and the question becomes what do you draw first. Do you draw for example, the animal's head first, do you need to draw this green area independently of the yellow area, or can the green area fall behind a yellow shape, that would represent the lips, and so on.

And what I typically like to do is start with the simple stuff and basically build up on top of it, so that's why I am starting with the spikes also. The spikes would theoretically appear at the bottom of the stack. So for layering objects on top of each other, which is the way things work inside of Illustrator, then the spikes would be at the very back and something like the lips for example would be at the front. Now, we can always suggest that stacking order later, but you typically do want to work from the larger objects to the smaller objects, when you are building up your graphics.

Anyway, here is how the Pen tool works. Notice, right now that it's a Pen Cursor with an X, and the X is Illustrator's way of showing you that there is currently no active path. So, if you start clicking or dragging with the tool, you will begin a new Path Outline. Notice as soon as I click, I am going to click right there, sort of in the center of the creature's nose, notice that I set an Anchor Point, this little blue square, and it's blue because I am working on a blue layer, that is blue is the color that's assigned to the drawing layer here. The fact that it's a square indicates that it's an Anchor Point, and notice that my cursor now appears as an un-adorn pen nib, thereby indicating that I have an active Path Outline.

So if I click at a new location, such as a top of this spike right there, then the Illustrator automatically joins these two anchor points, known as Corner Points, because they represent corners of my path. The Illustrator goes and joins those two corner points with a straight segment, and it does so automatically and then I just sit there and click away, like so. Now notice as I am clicking of course Illustrator is automatically adding these segments, it's also attempting to fill my open path. So we have got a stroke along this Path Outline and we also have this White Fill that's working its way through the Path Outline.

And sometimes the Fill makes sense, like right now. And other times it's a little bit hard to figure out. But at all times, Illustrator is pretending that there is a straight segment between the two endpoints, that is those anchor points at either end of my path in progress. Anyway, this Fill is really getting in my face, right, it's blocking my view of the tracing template, as I work along. So what I will probably want to do is go up to the View menu, scroll my way up to the top and choose the Outline command or press Ctrl+Y, Command+Y on the Mac, so that I just see the Path Outline, I am not seeing the Fill or the Stroke.

And notice that I am still seeing the tracing template in the background, and as you may recall from a previous chapter, that's how tracing templates work inside of Illustrator. You can see them in either the Preview or the Outline mode, so you can always keep track of what you are doing. Then I will go ahead and click let's say, here. It's some arbitrary location inside of the crocodile's face, and bear in mind that this path is going to appear in back of a bunch of other paths so all of this garbage will be covered up. And then I am going to go ahead and close the path. Now, I don't necessarily need to close this path, I just typically do this to eliminate any straight points, when I am building up filled shapes like these.

Anyway, notice when I hover over that very first Anchor Point in the path, I get a Pen Nib with a little circle right next to it, and that circle shows me that I am going to close the Path Outline. So I will go ahead an click, the Path Outline is now closed, if I move my cursor, to an area where we can see it, notice it's a pen with an X once again, thereby showing me that there is no open active Path Outline at the current time, and where I'd click or drag with this tool, I would begin a new Path Outline. And that my friends is the most rudimentary approach to using the Pen tool in Illustrator.

In the next exercise, I am going to show how to move, add and delete anchor points.