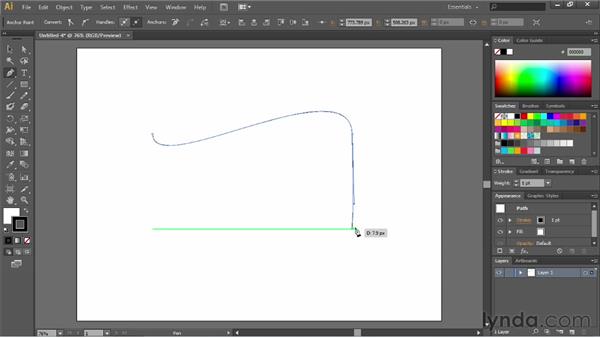 Drawing curves with the pen tool is probably the scariest thing about it, and people just don't understand, exactly what the pen tool does, and that's why they get a little nervous. But in this movie hopefully I'll give you a breakdown of what the pen tool's actually doing as you're creating curve lines, to help you understand it a little better. So let's go to the file menu and choose new. Just accept the defaults to whatever type of document it has in there, and then grab your pin tool. You can do that by pressing the letter P on your keyboard. And so we know how to draw straight lines. That's fairly easy, you just click and click to draw a point.

It's just, it goes against what we think should happen, because we're used to drawing by hand so we think, okay, in order to draw an upward curve we move our hand up. Well not with the pen tool, you actually have to go in the opposite direction. So, in this case if I wanted to I could just draw this straight up, something like that, Make a curve. Now the other interesting thing here, is the preview of the pen tool is going to let me know exactly what this is going to do, if I were to draw another point right here. So I don't even have to make this curve, this second point. All I do is just click and it draws out that same curve that I just had which is pretty neat.

Now I can come here, and what I'm going to do is curve this out, something like that. Here's the part that kind of weirds people out. See how when I come back here what I want, I'm trying to draw a fish tail and I want it to curve back in ward a little bit, but when I try to make another point it thinks I'm making like a circle. So, how do I get it, by pressing Cmd or Ctrl+Z, how do I get it to make it do what I want it to do? Well you have to sort of educate the pencil on what you want to do here. So, I am going to cover this extensively when we talk about using the keyboard a little bit later on, but just for now, hold down the Option key on mac, the Alt key on PC and just click right here on this anchor point.

And you'll notice, one of the control handles goes away. That's just telling the pen tool, hey, for now, ignore the curve. Okay? I just want you to do what I want you to do. And so now, I can draw a curve. That goes in instead of out, just like that. I can continue this right around there, and then complete it right back over here, and I'll just click and drag to complete it. There we go. A nice little whale or fish or whatever you perceive it to be, but in any case, it's not that difficult to draw.

It's just a few clicks, and a few drags, and that's all that a curve is. It's just you coming to grips with the fact that you have to drag in the opposite direction that you want the curve to go, and then knowing how to make the pen tool behave how you want it to. That little alter option to click, that I did right here, people just aren't aware of that, so they don't understand how simple it is to just reset the pen tool and say you know what, I want you to do this instead. They just click, they see it do something funky, and then they think aw man I just can't do this. You can do this. It's really really simple.

You just have to know how it works before you get going.