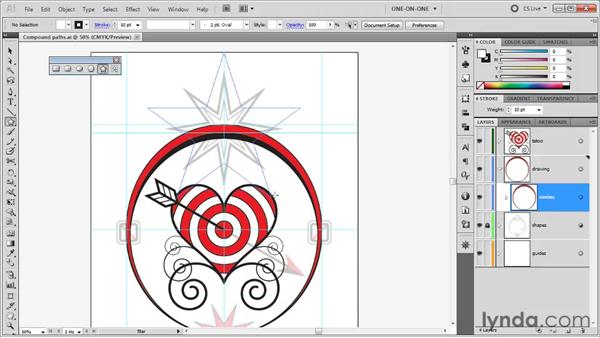 In this exercise I'm going to show you how to draw stars in Illustrator and the Star tool is one of the most flexible tools in the program, it's actually a lot of fun to use. So I've gone ahead and saved my changes as Compound paths.ai found inside the 05_shapes folder, and as long as I have my drawing layer expanded, I want to go ahead and select these two Compound Paths and combine them into a single group. Now, there's a variety of different ways to select these paths, I could meatball one shift+meatball the other, not too tough, however, I want to show you a special trick that allows you to select all of the objects inside of a given layer at once.

Now this is different than meatballing the layer itself, which includes the objects inside the layer by association, but really targets the layer as we saw when we changed the Opacity of the shapes layer. Instead what you do, I'll go ahead and press Ctrl+Shift+A or Cmd+Shift+A on the Mac to select nothing, and you press the Alt key or the Option key on the Mac and click on the layer, and notice by Alt or Option clicking, you go ahead and meatball the items inside of that layer. Then I'll press Ctrl+G or Cmd+G on the Mac to go ahead and group these objects and I'll rename the group Circles.

Even though they're really elliptical crescents, circles will do, and I'll click OK. Alright, before I draw the star I want to set up white as my default fill color but when I look up here on the Control panel, I sort of take a step back, because I'm seeing this question mark that indicates that I have multiple fill attributes going on and then I see that my Object Type is Group, which means I still have a selection inside of the illustration and if I go changing the fill color, why then I will change those selected objects. So I'll press Ctrl+Z, Cmd+Z on a Mac to undo that modification, press Ctrl+Shift+A, Cmd+ Shift+A on a Mac to deselect.

Now I see up here on the Control panel that I have No Selection, so thoughtful of it to tell me, and I'm being sincere by the way, and I can see that white is my default fill color, black is my default Stroke color and as long as I'm here I'll change my Stroke Weight to 10 point like so. Now I want you to select the Star tool, and I'm going to go ahead and scroll up a little so I have some room to work. The Star tool always draws from the center outward, all the time, and notice by default it draws a kind of slightly bulbous five pointed star.

You could change that to a classic five- point star like on an American flag, by pressing and holding the Shift key, that'll go ahead and constrain the star so it's upright and then if you press and hold the Alt key or the Option key on the Mac, notice that you make those sides nice and straight, so that one point is in perfect alignment with the opposite point. Now you might find it to be a little bit of a pain in the neck to continue to press the Shift and Alt keys or Shift and Option on a Mac when you can also use the arrow key to change the number of points associated with your star. So I'm going to release Shift and Alt for the time being, Shift and Option on the Mac and then I'm going to press the up arrow key a few times and it seems to be very sensitive, it's adding a lot of points very quickly, I went too far, so I'll press the down arrow key.

I want eight points altogether, think I have nine. So I'll press the down arrow key and now I've got it. So we're looking for an eight pointed star, so you press the up arrow key to add points, and you press the down arrow key to delete points, be sure not to press and hold because then it goes really fast like that. Anyway, now that I've completely messed things up, there we go, that's what I'm looking for, good job Deke. Another thing you can do, as you're drawing with the tool, you can press the Control key or the Cmd key on a Mac to move the spikes independently of the interior points.

See that, and that's a function of pressing Control or Cmd as I say, and I can also of course, press the spacebar to move the star to a different location, and that works for all the tools incidentally. And then I can align my star to these guidelines, if I so desire, but my center point has gotten all goofed up, because I went and spacebar dragged. So you know what, I'm going to go ahead and release the mouse button and restart this shape, so I'll press the Backspace key or the Delete key on a Mac to delete the star.

I know I told you never to delete shapes inside of Illustrator but my caveat was, if they're totally wrong, just get rid of them of course. It's only if they're good design elements that don't fit that you want to keep them around. Anyway, I want to drag from, I think about there and I'll drag down this vertical guideline like so until I get a shape that more or less matches the one in the Template and I might need to press the spacebar and drag down just a little bit in my case, you might need to do something else and you can also modify the position of the star after drawing it of course by nudging it using the arrow keys.

Anyway, this looks pretty good. I'll go ahead and release and notice by the way when you're tracing a Template, you want the path outline to go through the middle of the Stroke. There's other ways to position the Stroke, but that's your best bet. And then release the mouse button in order to draw that star. So remember, you've got Shift to constrain the angle of the star, Alt in order to make sure the opposite edges line up with each other, which mine don't, by the way, so I didn't use Alt or Option on a Mac. You've got Control or Cmd to make the points more or less spiky and you've got the arrow keys to add and subtract points on that star.