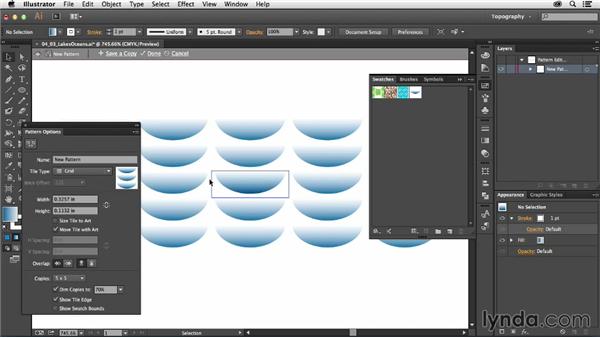 Join William Everhart for an in-depth discussion in this video Drawing bodies-of-water pattern fills, part of Creating a Map with Illustrator.

While we're on the topic of water, let's talk about some of the larger bodies of water, lakes and oceans. Now, these are typically drawn as flat irregular shaped blobs of blue. To help identify them as bodies of water and give your maps a little more style, these larger bodies of water should be more than just blobs of blue. I'm going to demonstrate how to apply multiple fills to these water bodies, including some readily identifiable textures, like waves. So here I have lets say, a lake shape and it is just filled with flat blue.

Now I could put the inner glow effect that I used on the river and give it a little bit of depth but I really want to add a little more to this. And a pattern would be an excellent way to do that. I can add a textured pattern that gives it the look of waves. So let's have a look at our Swatches panel. Here in the Swatches panel, I'm going to change my thumbnail view to a much larger view. Makes it a lot easier to see the patterns that I'm going to select.

And then I'm also going to limit the Swatch panel to only show patterns. I'll do that by choosing this option here. Now, I'll go ahead and reset that view to the large thumbnail view again, and we can see the available pattern. Well, I don't really have anything in there that looks like a wave. Illustrator comes with an extensive library of swatches. So let's see if we have a pattern that would suit.

Here in the Library panel, I'll navigate to the patterns. And I'm going to go to the decorative legacy. And in here we do have a waves pattern. Let's see what that looks like. I'll click on it to actually apply it to my object here. Now, I'm going to remove the decorative legacy panel because that pattern was copied into my Swatches panel. Alright well, that's not bad but it's still maybe not exactly what I'm looking for.

So, what if I wanted to create my own pattern? How do I go about that? Well, I have a small, little piece of artwork here in the upper left hand corner. It's just a half-circle. It has a gradient and a stroke applied to it. And it's giving me the, almost appearance of a wave. So, let's go ahead and convert this into a pattern and finish out that wave shape. To convert it to a pattern, I simply select the shape, go to the Object menu, down to Pattern, and Make.

Now, this is going to open up the New Pattern Options panel and this thing is awesome. First, I want to give it a name. So, I'm going to give my pattern a name. Waves. Next, I'm going to change the way it stacks these patterns. So the tile type, I'll switch that to say brick by row and you can see it automatically starts offsetting my little wave patterns here. But it looks a little bit like fish scales.

So let me change the offset of my bricks just a little bit. I'm going to set it to say a third. I will also give myself a little more vertical spacing between my waves. So for the height I'm just going to increase that value to about a quarter of an inch. That looks about right. Now, you can continue to modify this pattern. And just really dial it in to exactly the way you want. I think this will work for what we're trying to do.

So let's see how it works when we apply it to a shape. Here at the top of the screen, I'm going to click the done button. Now this will go ahead and save my new pattern. And there it is, in my Swatches panel. I'll zoom out. I'm going to select my body of water and I want to remove this existing pattern. So, I simply change the fill. Here in my appearance panel I can select that fill and select say a standard blue color. Next, I'm going to apply my pattern, but I want it to be on top of this blue. To do that I simply add a new fill.

Here at the bottom of the Appearance panel I add my new fill and I can change that fill to my new pattern. And so there we have it. A nice pattern filled for my lake. Now, what if my pattern is a little too large. Maybe I decide that those waves are a little to large or perhaps a little too small. You can size the pattern. So I could go back in and edit the pattern itself. Or, a little trick for you here.

I'm going to use the scale tool. Now, normally, if I were to use the scale tool, it would scale the object. If, however, I hold down the tilde key, then scale. It scales only the pattern, not my lake. How cool is that? Now, I could save this as a graphic style and apply it to other large bodies of water. Large water bodies are often overlooked when it comes to style. 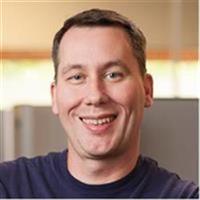 8/14/2013
Learn to create a custom map that provides clean and accurate directions and points out the landmarks you want to highlight. In this course, William Everhart shows how to build a road map in Adobe Illustrator, which you can then print or embed on a website. Discover how to obtain a source image; trace the map; draw and style different roads, landmarks, and basic geographic features; and label your map with type and symbols. Finally, learn to add turn-by-turn directions and prepare your map for print or sharing online.
Topics include: