Drawing with the Curvature tool 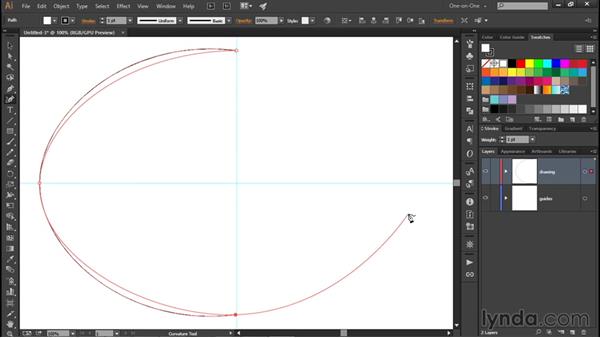 - In this movie, I'll show you the basics of drawing with a Curvature tool, which is very different than anything that we've seen so far. I'm going to start things off like usual, by going up to the File menu and choosing New from Template. And then I'll find that center guides template that I created, oh, so long ago now, and I'll go ahead and click on the New button, in order to create a blank document. Now notice for starters that the Curvature tool is located between the traditional Pen tool and the Time tool in the single-column toolbox. And also notice that it has a keyboard shortcut of Shift + ~ tilde being that key, once again, in the upper left corner of an American keyboard.

And that's a pretty easy shortcut to remember, because after all, the tilde character looks like that wiggly line coming out of the Curvature tool's icon. And once I select the tool, there's literally a tilde coming out of the cursor. We're also seeing an asterisks next to the cursor, and that tells us that we're about to begin a new path outline. And you do so just by clicking with the tool at which point you create an anchor point. Now notice that we're not seeing any kind of line coming out of that first point, but we know that we're now in path creation mode, because we're no longer seeing an asterisks next to the cursor.

Now I'll go ahead and click a second time with the tool, at which point you'll not only create an anchor point, but you'll initially see a straight segment between the two anchor points. That is to say, until you begin moving your cursor, at which time everything begins to bend. And so we're not only bending the segment that we just drew, we also see a preview of the next segment that we're about to create. And this is known as the Rubber Band function inside of Illustrator because, after all, the segments are bending like rubber bands.

Now I'll go ahead and click again down at the bottom of the screen to create a third point. And now notice as I move my cursor, that all three of my segments are bending. That is to say, the first two that I drew as well as the next one that I'm about to draw. And that's because there's a kind of co-dependency between the anchor points when you're working with the curve tool. Alright now I'll go ahead and click to create a fourth point over here on the right side of the screen. At which point things begin to settle down a little bit. Notice that the segment I just drew continues to bend as I move my cursor.

But the first two segments have more or less settled down. Alright now I'll go ahead and hover over the first anchor point, at which time I will see a little circle next to my cursor telling me that I'm about to close this path outline. And then if I move my cursor away, I once again see the asterisks, which tells me that if I click, I will begin a new path outline. Now the interesting thing about the Curvature tool is that it's not only a path creation tool, but it's also a path editing tool analogous to the arrow tools.

So for example, let's say I want to add another anchor point to this path outline. Then I can just go ahead and hover over one of the segments, at which point I'll see a little plus sign next to the cursor, which shows me that if I click I will create a new anchor point at that location and I will modify the curvature of the neighboring segments. Notice that things flattened out just a little bit. Now if I want to I could go ahead and drag that segment to a different location. So you can see, once again, Curvature tool not just a path creation tool, but also a path editing tool.

Alright now go ahead and create an anchor point on the upper right segment, and I want you to see as I drag it down, not only does it move, but its neighboring segments move as well. Again, demonstrating the co-dependent relationship of all of the anchor points as you add them and drag them around. Alright now just to polish things off here, I'm going to click on the Fill icon, the very first swatch up here in the Control Panel, and change the fill to none. And then I'm going to take the line weight up to, let's say, six points like so.

And so you can see, unlike when using, say, the Shape Builder tool, I can modify the fill and stroke attributes on the fly as I work with the Curvature tool. And that is a very basic introduction to how you draw with a Curvature tool here inside Illustrator.

Video: Drawing with the Curvature tool