Distributing by a specified amount of space 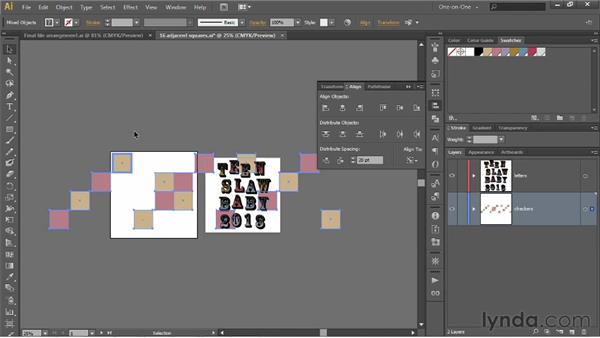 Join Deke McClelland for an in-depth discussion in this video Distributing by a specified amount of space, part of Illustrator CS6 One-on-One: Intermediate.

In this movie I'll show you how to distribute objects so that there's a specified amount of space between each selected object. For example, I want my squares spaced the way that you see them here, so that we have an even amount of space around all the squares--above, below, and on either side of the artboard--as well as between the columns of squares, and between the rows of squares as well. So if you count things up, just by row for example, we've got one space up at the top, three more spaces in between the rows of squares, and then a fifth space down here at the bottom.

Now I've taken my artboard and made it 100 points wider than it was before, as well as 100 points taller, and if you divide 100 by 5, you end up getting 20. So I need to space these guys 20 points apart from each other. So I'll start things off by selecting all the squares, and I can do that by going up to the Select menu > All on Active Artwork, or pressing Ctrl+Alt+A or Command+Option+A on a Mac. Now I am going to zoom out a little bit here, and I'll press Ctrl+U or Command+U on the Mac in order to turn on my Smart Guides. And then I'll drag this top square here by its upper-left point until its snaps into alignment with the upper-left corner of artboard.

Then, assuming that you haven't changed your keyboard increments, and if you want to check that, press Ctrl+K or Command+K on the Mac. Keyboard Increment value should be set to 1 point; if it is, go ahead and click Cancel in order to Escape out. And then press Shift+Down arrow twice and Shift+Right arrow twice as well in order to space all the squares 20 points down and 20 points to the left of the far edge of that artboard. All right, now I am going to press Ctrl+0 or Command+0 on a Mac to zoom back in. Now what I want to do at this point is bring up my Align panel, which is located over here, and you can also choose the Align Command from the Window menu.

And I want to take advantage of this Distribute Spacing option right here, but in order for these options to be available, you have to have selected a key object. So I'll go ahead and click a second time here on the one square that's in a proper position, which that upper- left square and then Distribute Spacing becomes available to me. And notice that a set the value to 20 points in advance. If you're working along with me, you should do that as well. Now I want to go ahead and horizontally distribute my squares, so I'll click on this Horizontal Distribute Space icon and I end up getting an absolute mess.

And the problem is--I'll zoom out so that you can see more of the squares here-- Illustrator is trying to distribute every single one of squares independently with the exception of the four squares that are grouped together. So we need to group these objects into rows and columns in order to properly distribute them. So I'll once again press Ctrl+O or Command+O on a Mac and I'll press Ctrl+Z or Command+Z on the Mac to undo that horribleness. I need to ungroup these guys in the center here, so I'll just go up to the Object menu with everything selected and choose Ungroup, or I could press Ctrl+Shift+G. And you can choose that command even when some of the objects that are selected are not grouped together.

Then when I click on Horizontal Distribute Space, I get the exact effect I was hoping for and we now have 20,points at the left side, 20,points over here on the right-hand side and 20 points between each column of squares. All right, now I'll press Ctrl+Shift+G or Command+Shift+G on a Mac to ungroup all the squares. Notice that gets rid of my key object. And now I've got to group all the squares by row. So I'll go ahead and marquee across the top row press Ctrl+G, Command+G on the Mac to group them; second row, go ahead and group those; third row, group them; and fourth row, go ahead and group those guys as well.

So obviously I am pressing Ctrl+G or Command+G on the Mac over and over again there. Now I'll press Ctrl+Alt+A or Command+Option+A on the Mac to select all the rows of squares, and I'll go ahead and identify the top row by clicking on it, but I do want you to see something here. You can just go ahead and select, from this little Align to pop up menu, you can select Align to Key Object, and that tells Illustrator to go ahead and select any old key object for you. So it just makes one up. In my case it decided the bottom row would work great.

That's not what I want at all so I'll click on the top row instead and notice that does two things: it identifies the top row as the key object and it turns off the bottom row. Now with my spacing value still set to 20 points, I'll click on this first icon, Vertical Distribute Space, and I end up achieving this effect here. All right, I'll go ahead and hide the Align panel and press Ctrl+Shift+A or Command+Shift+A on a Mac in order to deselect everything. And that is how you distribute objects according to a specified amount of space, here inside Illustrator.

11/21/2012
Join author and industry expert Deke McClelland as he teaches you how to take advantage of the next level of dynamic features in Adobe Illustrator CS6. This installment of his Illustrator CS6 One-on-One series starts by showing you how to effectively manage layers, clipping groups, and swatches, so that you can easily swap out colors and content. Deke then explains how to create customized strokes and patterns and build complex gradients with transparency and dynamic effects, and then apply these features to paths, groups, and editable text to create professional-quality artwork. He also highlights some of the most popular features in Illustrator: Live Paint and all ten of its Pathfinder operations. The final chapters show how to prepare your projects for print and save them for distribution on the web.
Topics include:

Video: Distributing by a specified amount of space