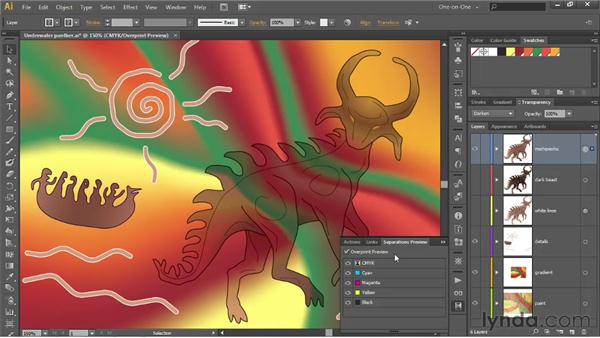 In this movie I'll introduce you to the first group of Blend modes which include Darken, Multiply and Color Burn all of which use the selected object to darken everything below it. So I'm going to start by meatballing this Mishipeshu layer here inside the Layers panel, and that way I can assign a Blend mode to the entire layer at one time, so that I am not creating interactions between the various selected paths. And now so I can see what I am doing, I'll press Ctrl+H or Cmd+H on the Mac to hide those selection edges.

Then I'll click on Normal, and as I was mentioning in the previous movie Normal is the absence of a Blend mode, so there is no blending going on, when you have the Normal mode except for the blending associated with the Opacity value, but there's no extra Blend mode equation. So the first group of actual Blend modes are these guys right here: Darken, Multiply, and Color Burn, and you can see they are organized into a group because they are related. Their opposites are the next group of Blend modes as we'll see in the following movie, and from then on the Blend modes are grouped logically as well--even if they do have strange names at times-- such as, for example, Multiply, which we'll see is one of the best Blend modes there is.

Anyway, I'm going to start things off with Darken which is the simplest of the Darken modes, which is the simplest of these three Blend modes. All it does is find which color is darker, and if a color is darker in the selected object then you see it; if a color is darker in the background then you see it instead. So in other words it's an on-off proposition which may lead you to wonder, why then do we have this obvious blend going on right here? Why don't we either see the background or the monster in the foreground but not both? And the reason is because this blending operation is happening on an ink-by-ink basis, so to really see what's going on we need the Separations Preview panel.

Now, the problem with Darken and the reason you're probably not going to use it all that often is because you can end up with some choppy transitions and you can see that our color transitions are less than smooth here inside these gradients. If you want something smoother and you want something a little bit darker as well, then you want to switch from Darken to Multiply, which is probably the Blend mode you'll be using most often inside of Illustrator. And what it does is it creates these wonderfully smooth interactions as you can see here.

It's analogous to taking the selected object and printing it on a translucent overlay, and then printing out the background on another translucent overlay and putting one overlay on top of another on a light table. So you end up uniformly darkening throughout the illustration, and you also get very smooth effects, which is why Multiply is the mode that Illustrator uses by default when you're creating drop shadows, because it is the shadow mode; it turns anything into a shadow. And then finally we've got Color Burn, which creates this radical effect here; we've got choppier transitions even than what we achieved with Darken, but we also have these elevated saturation values, as you can see here.

Now Color Burn may end up making your strokes look a little jagged, but that's just a function of the screen display if I zoom on in here, you can see that my strokes are smooth as they ever were, although I do have some choppy transitions inside the gradients. The ultimate moral of the story here is you're not going to use Color Burn very often, although it can be useful for creating burnt effects. You're going to use Darken the next most often --which is to say, not very often at all--and then you're going to use Multiply all the time. So what I am going to do is go ahead and zoom back out here and switch the mode back to Multiply and then I'll go ahead and press let's say Shift+6, which will work for you if you loaded dekeKeys, in order to reduce the Opacity value as well to 60%.

So both the Blend mode and Opacity work together to determine the translucency of a selected object. And you know what I think I'll do? I'm going to press Shift+2 in order to reduce the Opacity value to 20%, and then I am going to make a copy of this layer by clicking on a fly-out menu icon and then choosing Duplicate Mishipeshu. And I'm going to leave this guy set to Multiply, but I'm going to restore his Opacity to 100% by pressing Shift+0, and so now we have a darker effect still. So you can see if I turn off the bottom of these two layers--the one that's set to 20% opacity--that brightens things up a little bit, and then when I turn that layer back on, it darkens up that much more. And now I'm going to go ahead and grab my Rotate tool and I'll just drag this top version--the more opaque version--of the creature a little bit here in order to rotate him about this far, and we end up getting a kind of motion effect, which is one of the many, many things you can do using Blend modes inside of Illustrator.