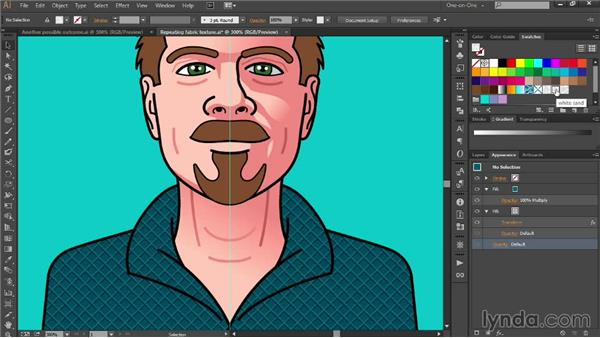 …In this movie, we're going to create another…texture that we're going to add to the sweater.…And this one involves these little white flecks here.…And the great thing about it, is its…based on a texture that ships along with Illustrator.…So, I'm going to go ahead and switch over to my drawing so far,…and, here inside the Swatches panel, I'll go ahead and click on this…little books icon, in the lower left corner, which takes you to the…various libraries that ship along with…Illustrator, and then you want to choose Patterns.…Choose Basic Graphics.…

And then choose Basic Graphics Textures.…And that'll bring up an independent floating panel, as you see right here.…Now, I've gone ahead in advance, and switched to the large thumbnail view.…Because I want to be able to see these textures as well as possible.…And the ones I decided to work with are these.…They're a little hard to find, so you're going to have to kind of hunt…around with your cursor, and wait for the hints to come up on screen.…One of 'ems called, USGS.…