Creating your own brushes 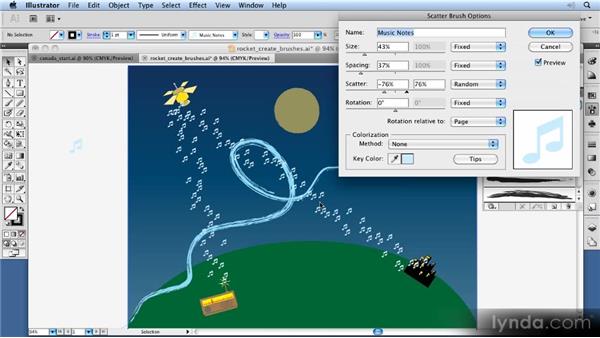 Join Russell Viers for an in-depth discussion in this video Creating your own brushes, part of 11 Things Every Beginner Needs to Learn to Love Illustrator.

Sometimes the libraries that come with the brushes down here just don't cut it. You could look for it, you can go down here to boarders, decorative, or bristle brush or decorative scatter and let's just see what they have there. Okay, yeah, that's fun, but that's not what I'm after. Alright. So, how do you create your own brush? Well, it's really hard. Are you ready for this guys? Let's say that I want to send a signal via satellite from this city to this radio.

So I'm gonna draw a path. We already talked about that. We start with a path, click, click. Click, there's our path, okay, and let's get the fill out of there. There we go. Now I wanna apply these musical notes to that path so that I give this idea that I'm streaming music from this city to this radio. So how do I make a brush? Out of music notes. Are you ready? You take the artwork, and you just drag it right into the brushes panel like that.

It's that simple. Now, for this lesson, lets choose scatter brush, and hit okay. Now, it asks us all these questions. I'm just gonna name this music notes, and I'm gonna recommend that, as new users, you just leave the default settings for right now, hit okay. Alright? Now let's select that line there and let's click on the notes. Ta da. There you go, you can see that the music notes have been applied to that line. Okay, well that was simple enough but what if we want other things done like, for example, they're too big? We want them to kind of flutter, not just be in a straight line, and all sorts of other things.

Well, I go over here and double click on the brush. In this case, the music notes. Make sure preview is on, now watch our art as I change the size. You can see them getting smaller. That's nice. Okay, let's put them like right there. But now they're too far apart so well, let's adjust the spacing. Now you can see they're closer together. And that's kind of a nice texture but I want them to look like fluttering notes. It's music, you know. Let's have them fluttering around. So. Let's go to scatter and let's change this from fixed to random.

And as grab this slider and move and grab this slider and move, I'm setting a perimeter from the stroke on either side that those nodes are allowed to go. Well, that's kinda nice that they're all, you know, fluttering, but what if I had them spinning as well? So let's go to random, and let's move that that way and move that that way. And now we've got all these random, fluttering notes coming up to the satellite, and down to our music box. And when we're done, just hit okay. Apply it to the strokes and the art.

And there we go! Done! So we've now created a brush. How hard is it if you don't have a piece of clip art like that? Well, it's pretty simply. Watch this. Take your star tool. Draw a star. Let's fill it with a color. Now there are a couple rules that we need to remember when making these brushes. Number one, it has to be vector art. You can't do it with photographs, anything rasture. It also can't have any affects on it, and, it also can not have gradience, anything that would render, that would be any resemblence of rasture won't work. So I'm gonna grab this star, I'm drag it right in there like that, hit, okay. Call this star.

And now we've got a star brush, okay, fine. What happens if take my pen to a let's say, and I'll click out here and I'll click over here and I'm just gonna create kind of an arc over the sky like that. Okay, let's hit command zero. Let's get rid of that fill, alright, there we go. Now I am gonna click on the star, and there is that star going over that sky. Simple. Doesn't have to be anything difficult. And I think even B clip art is something we can create. Double click, change the size to smaller, bring the spacing together, random scatter, random rotation.

Apply that. Let's go ahead and move that up a little bit at an angle. And our art's getting kind of busy here, so let's send that to back, bring it to front one. And maybe, that's a little bit, you know too loud there. So maybe we wanna change that in someway. But, I just wanted to show you the concept that it's very simple, just take any piece of art, drag it right in there and you're done. Alright let's go ahead and get rid of that one. I didn't like the way those stars turned out.

Alright? Simple enough. Creating. Just grab something. Drag it in, apply it to the stroke, if you don't like it double click, make your changes and you're done. 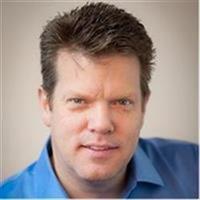 3/22/2011
In this workshop Adobe Certified Instructor Russell Viers distills his vast knowledge of Adobe Illustrator into 11 simple things that open up a whole world of possibilities. Before you know it you'll be playing around with art and logos and creating intricate designs by combining paths with the Pathfinder.
Topics include:

Video: Creating your own brushes