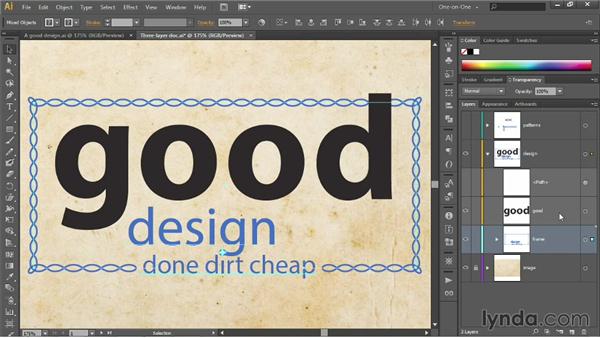 In this movie I'll show you how to create an employer sub layer. And, a sub layer is just what it sounds like. It's a layer inside of a layer. And sub layers are great when you want to take a group of objects and either lock them down or hide them while keeping them inside a given layer. For example let's say I want to protect everything that is currently blue inside my illustration. Then I would go ahead and partially marque these objects using my black arrow tool making care not to move to far up because then I would select the word good. I will select pretty low, like so, that selects everything except the word good.

Now if I twirl open the design layer you can see those orange squares next to each one of the selected objects. Now, there's a couple of ways to create a new sub layer. One is to make sure that the Design Layer's active, as it is, and then you drop down to this great, new sub layer icon. And either click on it, if you want to create an unnamed sub layer or if you want to name the thing as you make it, then Alt+Click or Opt+Click on that icon. And I'll go ahead and call my layer Frame. And I want to assign a colour that's complementary to the gold that's assigned to the design layer.

So I'll go with something like cyan, let's say. And click OK. But there's a problem with this approach. Notice that the frame sub-layer appears at the top of the design layer, and it has its own unique colour, which is fine. However that colour can bleed into the objects below it. And that happens if you twirl closed that design layer and twirl it back open. Now you can see all the objects below the frame sublayer are colored (UNKNOWN). That's something of a bug, but here's the workaround. I'll press Control+Z or Command+Z on a Mac to un-do the creation of that sublayer.

And that doesn't take care of my problem until I twirl the design layer closed and then twirl it back open. The solution is to create your sublayer at the bottom of the stack. Now that's not always possible but it is in my case. So, I'll go ahead and click on the design layer, here inside the layers panel, and then I'll press the control and alt keys or the command and option keys on the mac and click on create new sublayer. And that goes and puts the new sublayer at the bottom of the design layer. And I'll call this layer frame again and I'll assign a color of (UNKNOWN) and then click OK.

And now by virtue of the fact that this sublayer is at the bottom, it's not going to affect the color of any of the other objects. Now we need to move the selected objects into that sublayer. You can go ahead and drag any one of these orange squares right here, but that will end up moving just that one object. If you want to move all the selected objects, you need to drag the orange square to the right of the design layer, all the way down the stack like so. And then drop it into the frame sublayer. So that's one way to work. I'll go ahead and press Ctrl+Z (Windows), Cmd+z on the Mac, so I can show you the other way.

Which is to click on this top most selected option, and then shift click on the bottommost object in order to select them inside the layers panel, and then go ahead, and drag them directly into that frames sub layer. Now we are left with just a couple of objects that are not inside the frames sub layer, that is this text, the word good, and also this path that is turned off, I will go ahead and turn it on for a moment here, it is this little spirograph effect. And just so I can keep track of what this path is, I'll go ahead and double-click on it and re-name it spiro.

And great thing about Illustrator is that you can name anything on an object by object basis here inside the layers panel. All right. I'll go ahead and turn that spirograph back off. And I'll click on good in order to select it. Now, currently, this is live editable text. However, in order to create these final 3D letters, I need to convert the text to outlines. So I'm going to switch back to my document here. And you do that, by the way, by going up to the type menu, and choosing the create outlines command. However, that ruins your ability to edit the type later on down the line.

So I typically, before I choose this command, I go ahead and make a copy of my text. And so what I'm going to do is keep this text safe by putting it inside yet another sub layer. So I'll click on design in order to make it active. And then I'll press the Ctrl and Alt keys, or the Cmd and Option keys on the Mac. And click on the create new sub layer icon. And I'll call this sub layer safe, because that's its purpose. And I'll change its colour to light blue there at the top of the stack, because that seems like a safe colour. Now I'll click okay in order to make this layer.

And I actually want this layer to be on top of frames. So I'll move it up just by dragging it. And then I'll drag good down into the safe sub layer. And we can see good is now in the layer because of the thumbnail. I'm going to go ahead and twirl it open, so that I can see the word, good, there. I'm going to click on it to make it active. And I'm going to create a copy of this object by going up to the layers panel fly out menu, and choosing duplicate good. And that will copy the text and deselect the original text, as you can see. Alright, with the copied text still selected here, I'll go up to the type menu and choose Create Outlines, or you can press Ctrl+Shift+O, or Cmd+Shift+O on a Mac.

And as you can see, that goes ahead and converts the letters to path outlines. Alright now I'm going to do something that might seem a little strange at first. I'm going to hide the safe layer by clicking on its eye to turn off, and that hides both the editable version of the text. As well as the text that's been converted to paths, here inside the sub-layer. Now I want to make a copy of the text that's been converted to path outlines. So I'll click on this top item here, which is called Group, and I'll press the Alt key, or the Option key on the Mac. And I'll drag it outside of the sub-layer. And notice, as soon as I do.

That will not only create a copy of that group, but it will also make the copy visible here, inside the illustration. And that is because it's now part of the large visible layer, as opposed to the hidden sublayer. Now, I'll go ahead and twirl that sublayer closed. And finally, I'll go ahead and lock down that frame layer by clicking inside this column, just right to the eyeball. And there you have a couple of uses for sub layers. Which allow you to both hide and lock groups of objects here inside illustrator.