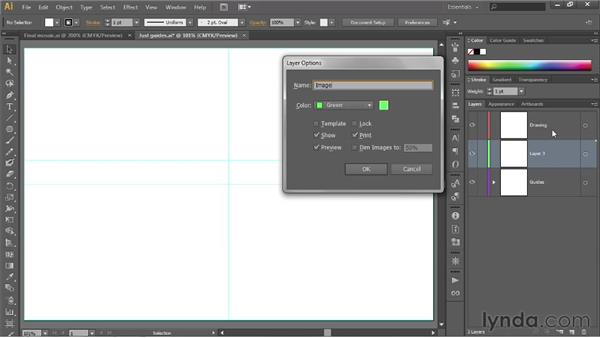 In this movie, I'll show you how to place a photographic image into Illustrator, and then converted into a tracing template, and there are three advantages to a tracing template. First, it's lockdown, so you don't end up moving the images as you're trying to trace it. Second, it's dimmed or faded, so you can tell the difference between the photograph and the stuff you're drawing and third it's persistent. So there are times you can see through your drawing to the photograph below. The photographing question is this one here, I've got it open in Photoshop, I'll go ahead and zoom in, so we can see some of the details.

We're going to take these tiles, and we're going to trace them to create this final vector based Illustration open inside of Illustrator. And this is the kind of thing you're only going to achieve by manually tracing an image. In other words, you're not going to get these kinds of results from the Image Trace feature. Now it may look a little daunting at first, but the good news is it's not that hard. Even if you're new, not only to Illustrator, but to graphic arts in general, you're going to be able to pull this off, and we're to be drawing this thing from scratch over the course of this chapter and the next and believe it or not, it's going to be a lot of fun.

So we're going to start of inside of this file called Just guides.ai and sure enough all we have is a single layer called guides, and it just contains a few guidelines. To create a tracing template you have to place an image on an independent layer. So we have to start things off by creating a new layer, and you do that by dropping down to this little page icon at the bottom of the Layers panel and clicking on it. When you just click on the page, Illustrator automatically names the new layer. In this case, it's calling the layer, layer 2-- it's not necessarily what I want it to be called.

So I'll double-click on the layer name, and I'm going to change this one to drawing, because we will need a layer on which to draw, so it might as well be that one. Then I'm going to click on the Guides layer to make it active, here's another way to create a new layer. If you want to name the layer as you make it then you press the Alt key or the Option key on the Mac, and click on that little page icon and that forces to display of the layer Options dialog box, and then I can go ahead and call this new layer, image. I can also assign it a color. The color is just intended so that you can identify which objects are on what layer.

So, for example, if I were to leave the color as green then any selected anchor points and segments and so forth would appear as green on this layer, and then they would appear as red on the Drawing layer and so forth. But I'm going to change the color to medium blue. That's just a personal choice, you can go your own way, and then I'll click OK in order to create that layer. Well, let's go ahead and place the photograph on that layer, and I'll do so by going to the File menu and choosing the Place Command. If you're working along with me, go ahead and navigate your way to the 07_transform folder, you'll probably see a bunch of files, but among them will be Tile photo.jpg.

You can go ahead and select it and click the Place button, and we've placed our image. Now I need it to be moved slightly, you'll just have to trust me on this one. We need this image just in a very slightly different position in order for the guidelines to work and to move an image numerically, you can double-click on the black arrow tool icon here in the toolbox that's one option or when the black arrow tool is selected, you can just press the Enter key or the Return key on the Mac. And again, if you're working along with me, I want you to change the Horizontal value to 0.

4 points and the vertical value to just 1 point, like so so that you end up with this very small movement, but that does move the image into the proper position, then click OK. And again that's just to align the image properly with the guides. Now to convert the entire layer into a tracing template, what you do is you double-click on the Image layer, not on the name, you just double-click on an empty area or if you prefer, you can double-click on the thumbnail. In order to bring up the layer Options dialog box once again, and you turn on this Template check box right there.

And notice that goes ahead and locks the layer automatically, it's going to show the layer at all times, we're going to see a preview of everything that's going on. It's not going to print automatically as well. So all these options are dimmed here, however some are turned on and of course, Print is turned off, and then you have the option of dimming the images on this layer and of course I recommend you do so that you can tell the difference between the image itself and your drawing. And you can dim the image to any extent you like, 50% is going to work fine for us.

So just go ahead and click OK, and we get a 50% dimmed image, like so, and that's all there is to. We now have a lot tracing template right here, we can't draw on that layer obviously, because it's locked. So go ahead and click on the Drawing layer to make it active, and we are now ready to begin tracing the photograph in the next movie.