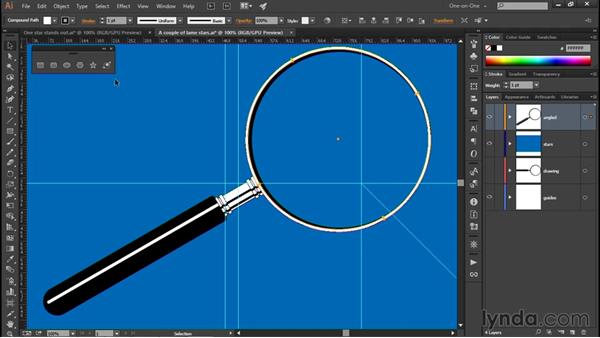 - In this movie, I'll share with you the formula for creating a perfect five-pointed star here inside Illustrator. I'm going to go and switch over to my documents so far, and I don't need these stars, so I'll go ahead and press Ctrl + A or Cmd + A on a Mac to select them, and then I'll press the backspace key or the delete key on a Mac to get rid of them. Now I want to add a background to this stars layer, and so I'm going to press Ctrl + 0 or Cmd + 0 on a Mac to fit the art board on screen, and I'm going to zoom out even farther, so I have plenty of room to work, and I'll go ahead and select the rectangle tool, and now I want to fill this entire bleed zone that's surrounded with a red border with this rectangle, and so I'm going to go ahead and drag from one corner to the opposite corner like so, and if you're working along with me, and your smart guides are turned on, then you should see a heads-up display with a width value of 1,032 points and a height of 696, at which point, go ahead and release the mouse button to create that rectangle.

We don't need any strokes, so I'm going to go ahead and click on the second swatch up here in the control panel and change it to none, and now I'll click on the first swatch in order to change the fill, and I'm going to set it to this shade of blue, which will be available to you by virtue of the fact that you created a basic RGB document here inside of Illustrator, and that blue is called R0G113B188, and it ends up producing this effect right here.

I don't want this rectangle to get in our way as we're adding stars to the document, so I'm going to lock it down, and you do that by going to the object menu, choosing lock, and then choosing selection, and the second you choose that command, your handles are going to disappear, and you will no longer be able to select that shape, so notice if I switch to the black-arrow tool, and I go ahead and click on that shape, I can't select it. If I drag it, it doesn't move, and so forth, and that way it won't get in our face in the future.

I'm going to zoom back in by pressing Ctrl + 0 or Cmd + 0 on a Mac, and I'm also going to turn on my angled layer, so that I can see the magnifying glass. If you take a look at the final version of the illustration, and I'll turn off the lone-star layer here just so that we can see. Notice that this perfectly rendered five-point star is perfectly centered inside the magnifying glass. In order to make that happen, I need to find the center of this large circle, so I'll go ahead and switch over to my document so far, and I'll click on the outermost circle to select it, and notice that we have a center point.

You also notice that our points are sort of off kilter here. Notice these four points that are surrounding the circle, and that's because we rotated these shapes, and that means we rotated their points as well, but the center point is all we care about. So with that center point visible go ahead and press Ctrl + R or Cmd + R in a Mac to bring up the rulers, and you can just drag a horizontal guide out of the horizontal ruler, and a vertical guide out of the vertical one, but if you want to save time, then press and hold the control key or the command key on a Mac, and drag two guides at once out of the intersection of those two rulers, and then drop them into place right there at that center point like so.

But I made one big mistake, which is that I put the guides on the wrong layer, so I'm going to undo that modification. I'm going to click on the guides layer to make it active, and then I will once again press the control key or the command key on a Mac and drag out from the intersection of those two rulers, and then drop those guys onto the right layer. Now I'll press Ctrl + R or Cmd + R in a Mac in order to hide the rulers, and I'll switch back to the stars layer, which is where I'm going to draw my five-pointed star. I'll go ahead and select the star either from this floating toolbar or by clicking and holding on the rectangle-tool icon and choosing the star tool from the fly-up menu, and now I'll drag out from that center right there because the star tool, after all, always draws from the center outward.

Now notice that we do have five points, which is great, and if you have more then go ahead and press the down-arrow key until you have just five, and now don't worry about the fact that it's really super spiky. Just go ahead and press the alt key or the option key on a Mac in order to create a perfectly aligned five-pointed star, and also press the shift key in order to constrain the star so it's upright, and I'm looking for values in my heads-up display around 285 for the width value, but I'm having problems getting it.

There it was just for a moment right there. That would do: 28523 with a height of 271.27, but it's pretty hard to get exactly those values because of all the smart-guide snapping that's going on, and so you may prefer to dial in numerical values, in which case I'll go ahead and press the backspace key or the delete key on a Mac in order to delete that star, and I'll just click at the intersection of these two guidelines to bring up the star-dialogue box. Here's the problem.

What values do you enter in order to get a perfect five-pointed star? Well here's how it works. You want to go ahead and change the radius 1 value to 150, that's just so you and I get the same size star, and then you change the radius 2 value to 150 as well, in other words that same value, so whatever size star you end up going with, go ahead and enter that value again, and then enter asterisk for times 0.382.