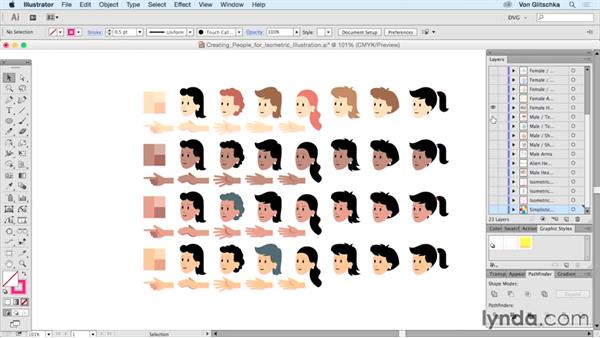 - For me the people in my isometric illustrations are representative in nature. Meaning they are there to reflect humanity and not specifically personality. I use the figures to tell the story, but they are no more important to the visual vernacular than any other object that forms the overall visual narrative I'm trying to communicate. Not all the characteristics of my figures align with isometric projection proper, but several key attributes of each do and that makes them work.

Let me show you how I choose to handle people in my isometric illustrations. Some isometric design only requires iconic figures to represent the human form. These are isometric in their projection as shown here, but not very compelling in their form or shape. This approach kind of reminds me of the old Fisher-Price toys when I was growing up. Now if you're doing a more diagram type, iconic illustration these might be perfectly appropriate for that type of usage, but when you're doing something a little more illustrative you need something with a little more detail and that's where my isometric people come in.

I've chosen to, well, isometric illustration can utilize almost any style and I prefer a more simplified ascetic, as showcased in the illustrations I've shared so far, with that said, all my people in of my isometric work visually come from the same creative genome one could say, meaning they're my vector clones, I guess you can look at them that way. I always kind of formulate and model my people in all the same fashion and I basically just refined and improved the same core base artwork over the last decade or so.

They idealize humanity in all the various forms without getting too specific regarding the finite detail. Once again, they're not absolutely perfect to an isometric projection, but because humans come in all shapes and sizes they're forgiving enough that they work. So I like working with them and what I've created, especially when I started putting together this course, is I used to handle the hands differently, and you've seen that in a previous movie I showed you, but I've changed that in terms of how I use them now.

I've created new assets to improve that. And so this represents all the various male heads that I can use on an illustration representing a diverse range of nationalities. And so whichever one I wanna go with I can just pick and choose what I need and then I'll add it to a body shape and I'll change an arm or a leg or add accouterments to the composition that enhance the genre or the theme I'm going for, such as the construction worker in a previous illustration I showed you.

I added a hard hat and his kind of working vest in order to pull that theme off a little better. So it's almost like cosplay, vector cosplay, where I'm creating the assets to fit the specific context I need. So this is where it all starts off with. Now you can get crazy and do fun stuff like maybe I have an alien species here, so all different kinds of aliens. And you can just copy and paste out whatever head I need, whatever hand I need, and then this gives me the tonal family for the art I'm using.

So if I need to change that then I have my base color, my highlight color, and my shadow color. So I try to keep the process simplified, so as I'm working on things it's easy to customize, it's easy to modify the artwork as needed. So this represents arms. So it's almost like a Doctor Frankenstein vector file here. And I'll just go in and pick and choose what I need, sew it all together, and create the characters needed for whatever composition I'm working on.

This shows like a couple of the males. These guys are dressed the same. And I've set up the files in such a way that it's easy for me to copy and paste a head, and change arms, and so on and so forth. So this shows a couple more males. Here's a couple more guys. Here's some guys in shorts. And now I also have assets for all the women. Now the women come in far more choices in terms of hairstyle.

My daughter's the one that told me you need to have this in there, and this in there, and this. She's the one that clued me in on some of these things to add, because I think I only had like five and so she told me that's not good, I need to add more variety. And she tried to get me to put lipstick in here, but that's like more detail than I wanted, so I art directed that out. I didn't go with that. But once again, the same principle as the males apply to the females in terms of how I use them. I just pick and choose. Maybe I want one of the heads in the top row here, one of these hands, and I'll copy and paste it out, and start composing the figure I want.

Now the arms on the women are a little more slender, not so masculine, just to work better with the female form that I'm creating. Here's a couple compositions. Here's another one. I'll change colors and some of the styling in terms of their clothes. Here's another where they're ready to go to the pool party you saw in a previous illustration. And now at times I'll create different poses for specific context of use. So this one I had to have them using a cell phone, so that's what this one is.

Here's the guy using the cell phone. And here's the base figure, but once again, I'll take a base figure and I'll go in and I'll change elements in order to make him align with what I need. So you saw this guy show up in my construction one, so like I said, it's like vector cosplay. I just kind of illustrate them with the costume needed for the context needed, and that helps kind of bring believability to overall composition.

Now this is where I can change an arm relatively easy on this guy. And once again, like I've shown you before with isolation mode, that's how I have these characters set up, so I can take an arm and I can just copy it to the clipping board, go in here and you can see I have it grouped, so I'll click in. I'm going down into my layering here until I get to the arm. I'll zoom in on this, go like this, I'll paste the new arm in here, and then this is just how I'll bring it in, drop it into place, get rid of the old arm.

And you can see how I have this shadow set up here. Now the shadow I never know how it's gonna interact with the body, so I'll take the shadow out. We have to drill back down to where we were. And then I'll paste the shadow into place. I'm gonna make a copy of the vest and go back to where I had the shadow, I'll paste that.

I usually do this, this is, I get lazy at times, so I'll make a copy, bring it over here. I'll take the shadow, I'll take the vest, we'll do, actually in this case I wanna make sure this is gonna capture the whole shape, so I'll select that, I'll select the shadow, we'll do intersect, and this gives me the shape needed for the shadow, but it's not the right coloring, that's why I copied it over here so I can use the eyedropper and apply the color. So now we have the shadow set up the way it should be and I've altered his arm.

So it's not super hard to customize this with different appendages, having his arm moving a different way, I can redo his legs, so on and so forth. So it's all about customization. You can get crazy with it. So here's an alien dude, he's in his pajamas I guess, now that I'm looking at this it looks like a jumpsuit, I could have done a better job on that spacesuit, but one illustration I did years ago, just for the fun of it I added in an element in the isometric illustration and I didn't tell the client, I just wanted to see if they would notice it, and the guy I was working with, his name was Bob, so I put this on the wall of one of the scenes I created and he didn't notice it and I kind of forgot about it and it got used and then once he discovered it he just started cracking up, he really liked that he made a cameo in my illustration.

So isometric illustration is fun, this is just how I choose to handle people. There's a lot of different styles you could use and you could approach it in different ways, so this just happens to be the way I started doing it and I just kind of stuck with it because it works and I like keeping the process simple. So I suppose one could argue that my isometric world is full of vector clones and I wouldn't necessarily disagree with that. I've copied and pasted head, arms, legs from one figure to another to form various personas when needed, so yes, I am a Doctor Frankenstein, if you will, but the style I've established for my isometric people has worked really well for me, so I'm gonna stick with it.

I encourage you to figure out how you could style and develop your own unique approach to the human form as it appears in your isometric illustrations.

7/17/2015
Isometric illustrations offer a unique view, perfect for technical illustrations, city scenes, and retro-inspired design. What they lack in perspective, they make up for in clarity, and have been used to diagram complex information for centuries. In this course, illustrator Von Glitschka shows how to create detailed isometric views of buildings, vehicles, and even people using Adobe Illustrator. He builds basic isometric shapes, automates parts of the process with actions and Smart Guides, and incorporates color and detail into the final design. The course closes with an artist spotlight and a challenge to get you thinking isometrically.
Topics include:

A: A new video was added that covers reversing isometric projection.