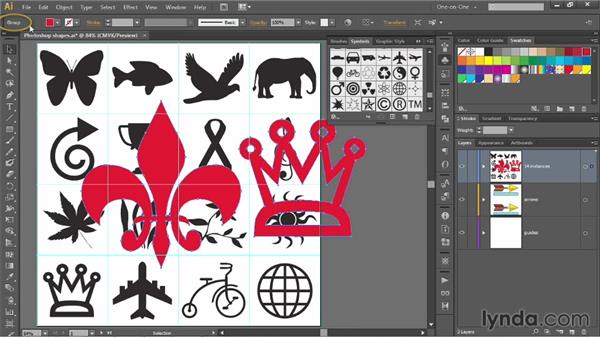 In this movie, I'll show you how to create and rename symbols. If you have access to the exercise files, you'll find one called Photoshopshapes.ai. And if you bring up the symbols panel, you can see that it contains tons and tons of symbols that I've acquired over the years from Photoshop's Custom shape tool. And for those of you who don't have access to this file let me show you how you can put one together for yourself. I'll go ahead and switch over to Photoshop. And then I'll drop down to the near bottom of the tool box here click and hold on the Shape tool and select the Custom shape tool.

And then what you want to do is go up to the shape options here in the options bar. And click on it and you'll see that you have a variety of different shapes that you can choose from. For example, I can go ahead and grab the fleur-de-lis if I wanted to. And then just drag inside of my image like so. And if you want to constrain the proportions of the artwork so you don't end up stretching it then you press and hold the Shift+key until you finish drawing the shape. Now that might seem like a cool trinket, but a, it's something that's missing from Illustrator and b, you have access to a lot more artwork than these simple shapes here.

And you can get to everything that ships along with Photoshop by clicking in this little gear icon and choosing All form the menu. That's going to go ahead and replace everything that's already here so instead of clicking append. Just go ahead and click on the OK button, and you'll see this very long list of shapes like so. And then I might grab one such as crown two, and I'll go ahead and press the Esc key to hide that panel. And then I'll draw the crown next door to the fleur-de-lis while pressing the Shift+key. To get this artwork over to Illustrator you want to get the Black arrow tool, which is the Path selection tool.

You can also get to it by pressing the a key. And then if we want to select both shapes here then I'll go ahead and click this guy, the crown, because currently these object are on different shape layers. And I'll press Ctrl+X or Cmd+X on the Mac in order to cut that shape. Then I'll go ahead and click on this fleur-de-lis for a moment here just to make sure it's selected, and I'll press Ctrl+V, or Cmd+V on the Mac. And notice that places the two shapes on the same shape layer, which is essential if you want to select both. And then you can Shift+click on the fleur-de-lis in order to select it as well.

And then you want to press Ctrl+K, or Cmd+K on the Mac to bring up the preferences dialogue box. I normally recommend that people turn this option right here off, export clipboard because when you're copying big image files it can present a problem. But in our case we want export clipboard to be turned on as by default. So I'll just go ahead and click the Cancel button. And then go to the Edit menu and choose the Copy command or you can press Ctrl+C or Cmd+C on the Mac. Now go ahead and switch back over to Illustrator. And at this point it's just a matter of going up to the Edit menu and choosing the Paste command, or you can press Ctrl+V or Cmd+V on the Mac.

Here in the paste options dialogue box you want to go ahead and select Compound Path. Which is going to give you simpler shapes, not really faster ones. And then click OK. And you'll end up with these two unfilled shaped like so. Just to separate from the other clutter of the background. I'll go ahead and change their fill colors, to, let's say, red, to make them nice and garish on screen. And also notice that they've automatically been combined into a single group, which we can see over here on the far left side of the Control panel. So, to get rid of that group, go up to the Object menu, and choose the Ungroup command or press Ctrl+Shift+G or Cmd+Shift+G on the Mac.

Because otherwise, we wouldn't be able to define these objects independently of each other. And now we can select each object independently, which is altogether, essential, of course, for defining independent symbols. Anyway, I've already put these guys into this document, with the exception of these two down here. The tricycle, which no longer ships along with Photoshop. It did once upon a time. And then the World Wide Web next door. So I'll go ahead and delete the red shapes from view. And I'll show you two ways to save a shape out as a symbol.

One is to put the new symbol in a very specific location. I'll go ahead and increase the size of my panel here. And let's say I want to put this tricycle right next door to the bike. Well then I'll go ahead, drag it and drop it into place. You can see that allows you to specify exactly where that symbol goes and then release. And up comes the symbol options dialogue box. And actually want to name your symbol. Just call mine Tricycle. And in most cases, that's all you need to do. But I will briefly explain what's going on with the rest of the options. Type is specifically for working with Flash Professional.

And Movie Clip just goes ahead and gives the symbol a time code, which is a more flexible way to work. But if you're working just inside of Illustrator, then this option is meaningless. Next door we've got registration, which where Illustrator is concerned, affects the default location of the transformation origin when you're scaling or rotating a symbol. And I'll show you what that looks like in a future movie. I'll also explain nine-slice scaling in a future movie. And finally, Align the Pixel Grid is going to go ahead and align the perpendicular segments associated with the symbol to the Pixel Grid, which is useful if you're going to the web and if you're creating web art.

But if you're not creating web art or if you have circular or curving objects, then it's more of a pain in the neck than anything else. So I'll go ahead and leave it off and then I'll click OK. And notice that goes ahead and turns the tricycle into an instance, and we can see the registration mark right there in the center of the object. Alright, what if you don't want to drop an object to a specific location? Well, in that case, let's say you want it to appear at the end of the list. Then you go ahead and click on your paths out here in the document window, and you click on the little page icon, and at the bottom of the symbols panel as well.

And I'll just go ahead and call this guy World wide web, and then click OK. In order to save it off right there at the bottom of the panel, and turn the original object into an instance, of that symbol. Finally, let's say you need to give a symbol a new name. For example, if I click off this symbol to deselect it, you'll notice in this row I've got a symbol called Boom 1 and another called Boom 2, but I neglected to name this one next door, so it's just called New Symbol 164. If you want to change the name of the symbol, don't double-click on it because that's how you change the definition of the symbol.

That's how you edit it. To change its name you drop down to this little dialogue box icon at the bottom of the panel and click on it. And then I'll just go ahead and call this guy sculpted star and click OK in order to modift its name. And you can see that the new name now appears as a tip here inside the symbols panel. And that's how you create a new symbol as well as rename an existing one here inside Illustrator.