Creating and moving objects onto layers 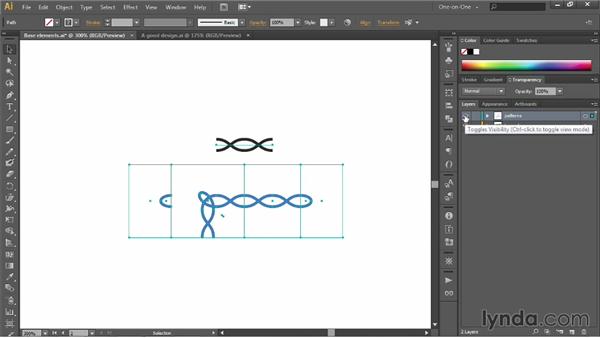 Over the course of this chapter, we're going to take the word "good", and we're going to transform it into this final effect. We're going to start things off in this movie by performing a few organizational chores. Specifically, I'll show you how to create layers, and move objects between layers. Now, if you have access to this Exercise file. Go ahead and make sure that the layers panel is up on screen, and you can get to it by going to the Windows menu and choosing the Layers command. Or you can press the F7 key which is a pretty common keyboard shortcut, across the Creative Suite applications. Notice that I have one and only one layer.

I'll go ahead and expand it by clicking on this little triangle and that twirls the layer open. And you can see that even though this is a very simple illustration at this point. I've got a total of 18 objects all glumped together inside of a layer that doesn't have a unique name. So I'm going to start things off by cleaning up this document. Notice this ornamental frame here. I created it using a feature known as a Pattern Brush inside of Illustrator. And I was able to create the Pattern Brush by assembling a few objects onto a separate art board.

And I'll go ahead and switch to that art board by pressing Shift+Page Down. And then I'm going to zoom in a little bit as well. Let's say I want to take these objects because I don't really need them anymore. And I want to offload them to another layer. But I'd start things off by twirling closed layer one here, and you can get a new layer by clicking on the little page icon on the bottom of the Layers panel. But that's going to create an unnamed layer. If you want to name the layer as you make it then press the Alt key or the Option key on the Mac, and then click that page icon and that will bring up the layer options diolog box.

And I'll go ahead and call this layer Patterns. And then I'll change it's color to Teal. And that's just a personal preference where this document is concerned. And I'll go ahead and click OK, and we've got a new link. Now, I'm going to select all the objects from this artboard by going up to the Select menu, and choosing All On Active Artboard. Or you can press Ctrl, Alt+ a, or Cmd + Option+ A on the Mac. Now, notice these selection edges appear in blue, and that's because the color currently associated with layer one is blue. If I want them to appear in a different color, then I just double-click on Layer 1 in order to bring up the layer options dialog box.

And then I change the color to, say, Gold. And then I'll click OK and now all of those selection edges change to gold. We also have this little colored square there that indicates the selected items inside of Layer 1. If I want to move these items to the Patterns layer, I just need to drag that little square to the Patterns layer. And notice now all my selection edges changed to teal. All right. Now I'll go ahead and turn off the patterns layer in order to hide those objects. And I'll press Shift+Page Up in order to return to the first art board which contains my Illustration in progress.

And notice behind the artwork, we have a photographic image that I've placed inside the document. Problem is, it's pretty hard to edit artwork when it's set against a full image like this. Because, what ends up happening is, anytime you click inside the artwork you end up selecting the image, instead of one of the other objects. So what I'd like to do, is place that image on it's own independent layer and lock it down. I want to create this layer behind layer 1, and there's a couple of different ways to do that. One is to press the Ctrl and Alt keys. That would be the Cmd and Option keys on the Mac, and click on that little page icon.

Notice that brings up the layer options dialog box, and it creates the new layer behind the previously active one. Another way to work, is to press the keyboard shortcut. Ctrl+Alt +L or Cmd+Option+L on the Mac. Now I don't know if it was Adobe's intention, that the only keyboard shortcut for making a new layer inside the program would create a new layer at the back of the active one. But it's ultimately because of the keyboard shortcut because Ctrl and Alt are involved on the PC, Cmd and Option on the Mac. In any case, that's the way it works. I'm going to go ahead and call this New Layer Image, and I'll change it's color to violet, let's say, and then I'll click OK.

And now with the image selected, and you can tell it's selected because we have this big x across the document window. I'll go ahead and drag that orange square that indicates the image down to the image layer and then the big x on screen changes to violet. And I'll also go ahead and lock down this layer, by clicking in the column right next to the i's. And that'll go ahead and give me a lock. And it also automatically deselects the image. Alright, now I want to rename layer one, so I'll double-click on it's name, and I'll call it design, and then press the enter key or the return key on the Mac.

And, finally, I'd like to be able to see these layers bigger. In particular, I'd like to see the objects on the layers, inside of the layers panel. So we have larger thumbnails, and you may recall you can achieve that by clicking in the little (UNKNOWN) And then choose in the last command, Panel Options. And what I typically do is select Other, and then dial in a value. And for this particular illustration, I'm going to enter a value of 60 pixels, and then click OK, and that gives me much larger thumbnails, as you can see here.

Bear in mind, however, that that is not a global preference setting. The size of the thumbnails is saved along with the document when you choose the Save command. And that friends is how you create layers and move objects between layers here inside Illustrator.