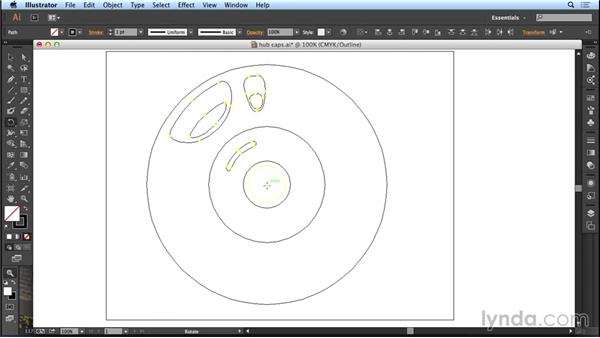 - There are many different types of vehicles throughout this painting. One of the main ones, of course, are the cars. Though if you've been to Amsterdam, you know the main thing is really bicycles. There's bicycles everywhere. But there's only three main bicycles and the ones way in the back. Lots of them back there. But the cars, let's draw a little attention to the cars to start with. Now there's cars on the right and the left. The ones on the left, you're seeing kinda the fronts of the cars. The ones on the right, you're seeing the sides going away from us.

Now here you see a basic shape. There's a circle on the outside and the inside and smaller ones going in. And then what happens is that each one of these shapes is going to be the overall shapes throughout the hubcap. So I created single ones of these other shapes. Little holes inside these indents and then this other little hole right there. So now, there's a feature in Illustrator that's very useful for this, which is the Transform Again, which is a little command of Command-D right here.

Those are the ones that are going to be rotated around. So now, I need to make a rotation. So I'm going to get my rotation tool right here, and place it right in the centerpoint. And hold down my Option key and click. That brings up the control. Now, the angle. What I did is I'm going to go around a 360 degrees, and there are five of these objects, so I divided 360 by five and I got 72. So I know that 72 degrees will be what I need.

And I say, "Copy." And there you see that it made the copy. So now you come over here and you see that under Transform, you'll see the Transform Again, which is Command-D. Do that and it does the same transformation. And I say it again and again, and there you can see that I have all the pieces that are necessary to make my hubcap. What I do at that point would be to Select All and I say Copy. Then I switch over to Photoshop.

And in Photoshop, I create a New File, which will automatically reflect the contents of what I have in the clipboard, which is right there. 72 dpi, I would change these so that I could get the size that I want. And I was working at 480, so we'll go to 480 resolution, and we'll make these a little bigger. Let's see in inches what they are. They're very small right now, so we'll make it five by five. Plenty of room. I click OK. And then I say, "Paste." And I bring them in as Paths.

Now, Smart Object, that's good, but in my particular case, it's going to make the file sizes a little bigger. So I have full control over what I'm going to be doing with these Paths. I didn't assign any color in Illustrator, just the basic shapes. So Pixels and Smart Objects are not necessary. Path is what I need. Path, so we're going to bring them in as Paths. Click OK and there they are. They're a little bigger than I need, so I hit Command-T, which is Transform Again, Command-0 so I can shrink it down so I can see the whole thing, and I bring them down to fit into that area right there like that.

Make that happen, and now I have the basis, all the Paths that I need. Go over to the Path tool and I save those Paths so I can then start to utilize those to create my full effect. Turn it on and there you see them. So in the next few movies, what we're going to do is we're going to see what happens to these Paths and how they get colorized and manipulated to form the hubcaps.