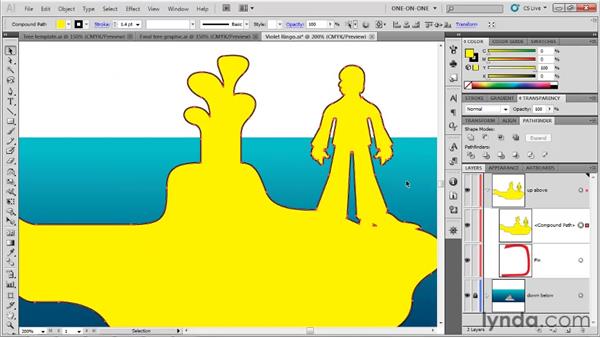 In this exercise, I'll show you how to create a compound shape and why you would want to do so using a Pathfinder operation. I've gone ahead and saved my progress as Violet Ringo.ai found inside the 10_pathfinder folder. I'm going to go ahead and zoom out a little bit so that I can take in Ringo and the submarine at the same time. Let's say that I want to join Ringo and submarine together. Now, I want them to be yellow. So, I'm going to move Ringo in back of the submarine, here inside the Layers panel, just the simplest way to go.

Then, I'll grab my Black Arrow tool and I'll Shift+Click on the submarine, because I already have Ringo selected. So, now I have both Ringo and the submarine selected. I'll go over here to the Pathfinder panel and I'll click on Unite in order to combine those two closed paths into one. That goes ahead and fuses them together into a Compound Path. Now why is this all of a sudden called Compound Path? I'll go ahead and undo that operation for just a moment by pressing Ctrl+Z, Cmd+Z on the Mac. Remember, just a couple of exercises ago when I united the pipes with the emerald submarine, that resulted in this thing called Path right there.

It was not called a Compound Path, it's just called standard everyday average Path. Whereas, once we get Ringo involved for some reason, we end up with a Compound Path. Why in the world is that and what does that mean? What that means is that we have multiple sub paths that are combined into one overarching path in Illustrator's mind. The reason that that's necessary is because we have paths that are cutting holes in other paths. For example, if I zoom in here on Ringo's legs, you can see that the interior portion of those legs is cutting a hole out of the larger Ringo/submarine shape.

We also have another little hole right there at the bottom of his boot, and that's cutting a hole in the larger shape as well. So, we have two holes going on here inside of this compound path and that's all Illustrator is doing. It's just telling us we've got a Compound Path. There you go, figured you would want to know. However, you can't twirl it open. Notice that. You can't gain access to those various sub paths there inside the Layers panel. You can only get access to them using the White Arrow tool, if you want to edit them independently. Another disadvantage to this approach by the way is that Ringo and the submarine are permanently fused together.

So let's say, I don't want Ringo standing over here on the right-hand side of the submarine. I want him over on the left-hand side of the submarine, the aft end. Well, I can't really move him after the fact with a Compound Path, but I can if I had been using a Compound Shape. So, I'm going to go ahead and press Ctrl+Z, Cmd+Z on the Mac to undo that operation. Then, notice here, if I hover over Unite, inside the Pathfinder operation, and this is true by the way for any of the Shape modes. If you hover over any of these guys, whether it's Unite or Minus Front or Intersect or Exclude and I'll be showing you how all these work, you'll see this message that says, hey, you can Alt+ Click or on the Mac you can Option+Click to create a compound shape.

And that's what we're going to right now. Alt+Click or Option+Click on Unite in order to merge those two closed path outlines into a single compound shape and notice, we now see the words Compound Shape here inside the Layers panel. Also notice that you can twirl the Compound Shape open in order to gain access to each one of the Paths inside of that Compound Shape, which is remarkable. Now what I'd like to do is select Ringo and move him to a different location. Notice, his feet are now intact. So we have access to that entire Ringo silhouette. Now albeit, It's colored yellow after the submarine.

So you can still only associate one group of Fill and Stroke attributes and effects and so on to a Compound Shape. In other words, Ringo and the submarine have to be filled, stroked and so on the same. However, they are independent of each other. Now to prove that, I'll go ahead and click off the Shapes to deselect them. Then I'll click on Ringo once again. Well, that went ahead and selected the entire Compound Shape, because I'm working with the Black Arrow tool. So, if I want to edit Ringo independently, I could either get the White Arrow tool and then I could click off the Shapes to deselect them and then Alt+Click or Option+Click on Ringo to select his entire path outline, again independently of the submarine.

Or I could just meatball Ringo here inside the Layers panel. Then, I can move them to a different location such as this. So he remains an independent path outline. However, because he is part of a Compound Shape along with the submarine, he and the submarine are continuously fused together. Alright, just to keep things clear, I'm going to go ahead and rename the bottom path ring, and I'm going to rename this top path submarine like so. In the next exercise, I'm going to show you how to change the relationship between the two paths inside of a Compound Shape by applying yet another Pathfinder operation.