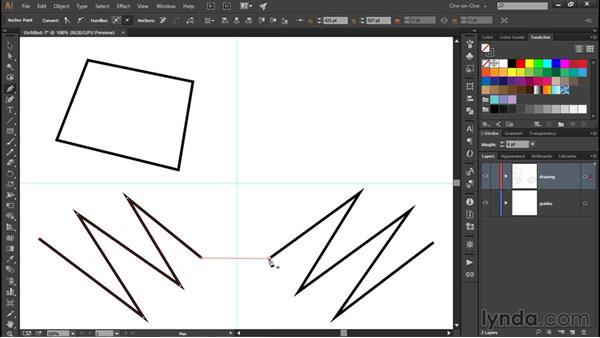 - In this movie, I'll show you how to use the pen tool to create and modify corner points, which are anchor points that occur between straight segments. I'll start things off the way I normally do, by going up to the file menu and choosing New from Template, or you can use that shortcut of ctrl shift n, or cmd shift n on the mac, and then I'll go ahead and double click on my RGB with center guides.ait file in order to bring up a blank artboard. All right, now I'll go ahead and select the pen tool, which you can get by pressing the p key. And if, for some reason, you're not seeing the pen tool at this location, then go ahead and click and hold on whatever tool you are seeing, and select the pen tool from the top of the fly out menu.

All right, now I'm going to change my fill and stroke by clicking on this first color swatch, up here in the control panel, and then I'll select none. And next, I'll go ahead and increase the line weight value to 6 points, like so. All right now, if this is your first time using the pen tool it may look a lot like the curvature tool. After all, the only thing we're missing is the little curlicue coming off the cursor, but the pen works very differently. Now when you first select it, you're going to see a pen tool cursor with an asterisk, which tells you that you're about to start a new path outline.

Which I'm going to do just by clicking to create, not a smooth point, as you get with the curvature tool, but rather a corner point. And now, if I move my cursor away, you can see two things happen. First, we lose the asterisk, which tells us that we now have an active path outline. And second, we see the rubber band preview, which shows us what the next segment will look like if we were to click at the present location. All right, so I'll go ahead and click in order to create another corner point, and you can see that Illustrator automatically joins the two points with a straight segment.

And now you can continue clicking to create a free-form polygon. If you move your cursor back to the first point in the path outline, you'll see a little circle next to it, which tells you you're about to close the path. And once you have, the asterisk comes back to tell you that if you're going to click again, you're going to create yet another path outline. All right, in addition to closed paths, you can create open paths as well and there are two ways to do that. You can either press the escape key in order to turn off that path outline and that will allow you to create a new one, or I'll go ahead and wake this path outline back up by moving my cursor over it.

And you can see, now I get a little line next to the cursor, which I call the resume cursor because it allows you to resume, modify in the path. And so notice as soon as I click on one of these endpoints, I, again, see my rubber band preview and the asterisk next to the cursor once again disappears. And now I'll just go ahead and click a couple of more times. And now let's say, once again, I'm done editing. The other thing you can do is press the enter key, here on the PC, or the return key on the mac, and that'll go ahead and deactivate the path outline.

And, as you can see, I get the asterisk back next to my pen tool cursor, which means that if I start clicking over on the other side of the document here I will begin a new path outline. Another option that's available to you when you're modifying open path outlines, is the ability to connect to open paths, and you can do that just by moving your cursor over to the endpoint of an inactive path, such as this one right here. At which point, you'll see a little anchor point next to the cursor, which tells you that you're about to connect the two path outlines as well as deactivate them.

At which point you'll see a plus sign next to the cursor, which tells you that if you click, you're going to add an anchor point, like so. Now let's say I want to move the anchor point to a different location. Well if I press the ctrl key, or the cmd key on the mac, and try to drag that point, I'm going to move the entire path outline, because after all, my last used arrow was the black arrow tool. So I'll go ahead and press ctrl z or cmd z to undo that move, I could manually switch back to the white arrow by pressing the a key, or I can switch between the arrow tools on the fly by pressing ctrl ~ here on the PC.

And, as you may recall, the tilde key is the one in the upper left corner of an American keyboard. Now on the mac, that's not going to work. That's going to switch you between open documents, and so what you have to do instead, is press cmd, option, tab, and that will go ahead, in my case, it'll switch me back to the black arrow tool. So in other words, either ctrl ~ on the PC, or cmd, option, tab on the mac, is going to toggle between the black and white arrows. At which point, I can keep that ctrl key down, or the cmd key down on the mac, and then I can click on that new corner point that I just created and I can drag it to a new location.

And that's a pretty great way to work, by the way. You just go ahead and release the key, hover your cursor over a segment, click in order to add an anchor point, and then ctrl or cmd drag it to a different location. And I'll go ahead and do it again here and ctrl or cmd drag it over to this location, and so I can contine working that way as much as I like. Now you also have the option of deleting anchor points. And you do that by hovering your cursor over an existing point, like so, at which time you'll see a minus sign next to the cursor, and then all you have to do is click in order to make that anchor point go away.

And now I might just ctrl drag or cmd drag that point upward a little, and this works, by the way, with any path outline. It doesn't have to have been drawn with the pen tool. So, for example, let's say you want to create a free-form triangle; then one way to do that is to grab the rectangle tool, which again, you can get by pressing the m key, and then you can just go ahead and draw any kind of rectangle you like. Then, switch to the pen tool. Which again, you can get by pressing the p key, and then, go ahead and click on one of the anchor points to delete it and you end up with a triangle.

You'll also see a brief message saying that the shape has been expanded because it's no longer a so called smart rectangle here inside Illustrator. And now I can go ahead and ctrl drag or cmd drag any of the anchor points in any manner that I like. And that's how you create and modify corner points just by clicking with the pen tool, here inside Illustrator.