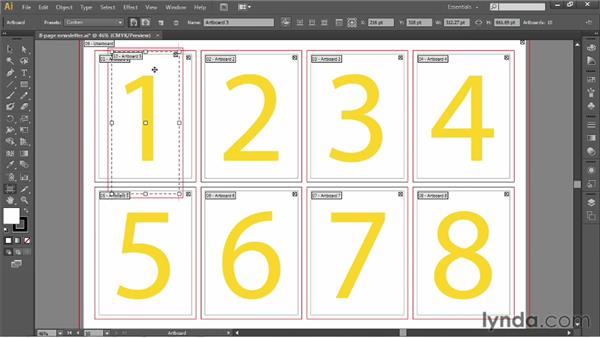 In this movie, I'll show you a couple ways to create new artboards, and I'll also introduce you to some artboard editing tricks that hinge on pressing the Shift and the Alt and Option keys. I've once again restored my 8-page newsletter.ai file. I am going to switch over here to the Artboard tool. One way to create an artboard is just to drag somewhere in an empty portion of the pasteboard, like so. And let's say I want to create an artboard that completely encompasses all of the other artboards.

So I've got a new artboard that's coming in automatically called Artboard 2. I am going to click on the Name item up there in the Options bar, and I'll change this guy to Uberboard let's say, and then press the Enter key or the Return key on a Mac. And we can now see that it's artboard number 09, up here in the upper left-hand corner, because after all, it's the ninth artboard I've created. And we can see it's named Uberboard as well. Now let's say I want this big artboard to exactly encompass all the other ones with a margin of an inch all the way around.

I'd start by reducing the size of the artboard, so I'm dragging the corner handles until they snap into alignment with the top left corner of page 1, and the bottom right corner of page 8. Then I'll go up here to be Options bar, and I'll set the Reference Point back to the center, I'll expand both the Width and Height values by clicking first on the far right side of that Width value, and then I will enter + 1in, which will give me an additional inch. But that's not really what I want, if I want an inch all the way around, I need two inches, so I'll go and change that value from 1 to 2, like so, and then press the Tab key.

So the remarkable thing is I can not only do simple math in Illustrator, but I can also do that math using different units of measure. So in this case, for example, with the H value, I'm adding 1212 points to 2 inches, and then I press the Enter key or the Return key on the Mac, to accept that change. The difficulty when you're working this way is getting to the other artboards, because Illustrator considers artboard 09 to be in front of 1 through 8. If I try to click on 1 to select it, I won't end up selecting it.

Instead, I'll create a new artboard. It just comes in at this arbitrary size. You can see the Width value is 312. 27 points, where is this coming from? I have no idea, but obviously it's not what we want. Two ways to get rid of this artboard or any other existing artboard, when it's selected you can just press the Backspace key here on the PC, or the Delete key on the Mac, or notice that there's this little closed box right there. If you click on the X in the upper right- hand corner, then you close the artboard, which is to say you delete it.

All right, what I want to do though as I was saying is select Artboard 01. So here is how that works. To cycle through artboards that are on top of each other, you press the Alt key or the Option key on the Mac, and you click. And that'll go ahead and select Artboard 01 instead. What if I want to create a new artboard inside of an existing artboard, like I want to create this little tiny artboard inside of Artboard 2? If I were to just start dragging in order to draw a new artboard, I wouldn't draw the artboard, instead I would move the existing artboard.

So I'll press Ctrl+Z, or Command+Z on the Mac, to undo that movement. Here's what you do instead, you press the Shift key, and you drag. Now notice, as long as I have the Shift key down, I go ahead and create an artboard with the proportions of the other artboards inside this image. If I don't want to constrain the proportions, then I would release the Shift key as I am drawing the artboard. So you just need to press it right at the outset of the drag in order to create that new artboard, like so. What if you want to duplicate an artboard? Well, if I want to move it of course, I just drag.

If I want to duplicate it, I press and hold the Alt key or the Option key on a Mac. Notice that gives me that little clone cursor there, because I'm seeing two arrow heads, one on top of another. Then you drag while the Alt or Option key is down, and you go ahead and create a duplicate of that artboard. You may ask, didn't I just say a moment ago that when you press the Alt key or the Option key on the Mac, and you click on an existing artboard you cycle back to one of the other ones, and that's true, if I were to Alt+Option-click, I'd go and select Artboard 2 right through Artboards 09 and 11.

However, if you Alt drag, then you make a copy. Finally, I want to show you how to copy not only the artboard, but the art that's inside of it as well, and I'll demonstrate that using Artboard 04. I want to select the artboard right away without selecting the bigger one, so I'll just Alt-click or Option-click on it so that I cycle right to it. Then you go up to the Options bar, and you click on this icon Move/Copy Artwork with artboard to turn it back on, and now you go ahead and Alt-drag or Option-drag that artboard, and you'll copy both the Artboard, and the number 04 inside of it, along with.

And that friends is how you create and copy artboards with the help of the Shift as well as the Alt and Option key.