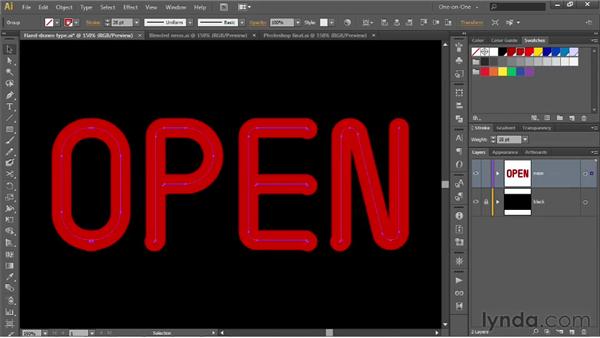 In this movie, we will take these very plain letters and we will turn them into one of the more classic type treatments that you can create inside of Illustrator, and that is neon; and we will be making these neon letters by the way, using the Blend feature that we saw in the previous chapter; and then we'll go ahead and enhance the credibility of the effect inside Photoshop to create this final version of the art. So some pretty exciting stuff coming up here. You are going to be creating just about everything from scratch. So I'll go ahead and switch over to my base art, and I want you to know that I went ahead and hand-drew these characters, and the reason is, if you start with editable text and then you convert it to path outlines, you invariably get closed paths.

In order for this effect work, you need open path outlines, which is why I had to draw them. However, note that they are not particularly complicated, if I click on the P for example to select it, you can see that it's a collection of straight lines along with a half circle over here, a quarter circle top left and so forth. Now we are going to want to blend one group of letters against another group of letters, so that means we need to group the letters together. So I'll press Ctrl+A or Command+A on the Mac to select all of the letters and then I'll go up to the Object menu and choose Group command, or you can press Ctrl+G or Command+G on the Mac.

Now we are going to start by creating a total of six different stroke variations, which means that we'll need multiple groups of these letters. So now it's a good time to go up to the Edit menu and choose the Copy command or press Ctrl+C or Command+c on the Mac in order to copy the letters to the Clipboard. And that way we can paste as many copies as we like. Now if I switch over to my Color panel you can see that my Stroke is active. Also notice that I am working with RGB values, and if I go to the File menu, you can see that the Document Color mode is RGB Color. And the reason of showing you this is because you're going to get a brighter neon effect if you work with RGB.

So I'll go ahead and escape out of there. With my Stroke Active I'll go ahead and switch over to my Swatches panel. I'll change the rear-most letters, which is the ones currently selected to Black. And then we'll go ahead and make the letters black against the black background, but they'll come in very handy in just a moment. You also want to change the Line Weight value, which is available on Stroke panel which I've gone up on screen. If you don't, you can just go to the Stroke value up here in the Control panel. And I'll change that Line Weight value to 32 points. All right, now we need to bring in another version of these letters.

So go up to the Edit menu and choose the Paste in Front command. In the future I'll be taking advantage of that shortcut, Ctrl+F or Command+F on the Mac. Now we want to change this guy to Deep red, which is one of the Swatches I've created in advance, and as you can see, it is indeed a deep shade of red. And I will change the Weight value to 28 points. And I just came up with these values and these colors through trial and error by the way. Now I'll press Ctrl+F or Command+F on the Mac to paste a third copy of these letters.

I'll change the color to this Vivid Yellow, and then I'll change the Weight value to a mere 4 points. All right, so that takes care of all the base paths that we are going to use in the blend. Now what you want to do is press Ctrl+A or Command+A again, to select all six groups of letters. You're not going to see anything changed because letters are sitting right on top of each other, and with all those groups selected, go up to the Object menu, choose Blend, and then choose Make; or you can press Ctrl+Alt+B or Command+Option+B on the Mac, and you'll end up getting a blended effect.

Now whether or not it's got to be smooth as it appears for me, I don't know. So let's go ahead and make sure it does, by double-clicking on the Blend tool icon, here in the toolbox. And by default I believe you are going to see Spacing set to the Smooth Color; in which case if I turn on to Preview Checkbox, you are going to see a much less smooth effect here because Illustrator is not creating a sufficient number of blends. If that's the case, then switch from spacing the specified steps, and I found that 20 steps between each group of paths worked beautifully. And then you go ahead and click OK in order to accept a change. And I'll press the V key to switch back to the Black Arrow tool and I'll press Ctrl+Shift+A or Command+Shift+A on the Mac in order to deselect by letters.

Now before we quit the movie, couple bits of housekeeping. I'll go ahead and twirl-open the neon layer hear inside the Layers panel, and you'll see here is our new blend that we just got done creating. Let's go ahead and rename it by double- clicking on the word Blend; and I'll change the name to Letters, and I'll also go ahead and turn on the border item above it. And I went ahead and created the border in advance because it's really the same darn thing we just got done doing, with the exception that instead of using a bunch of shades of red and yellow, I used a bunch of shades of blue.

All right, so obviously we have some work yet to do in order to come up with something that even vaguely resembles neon. But we have managed to get most of the heavy-lifting done, by blending between multiple differently stroked groups of letters.