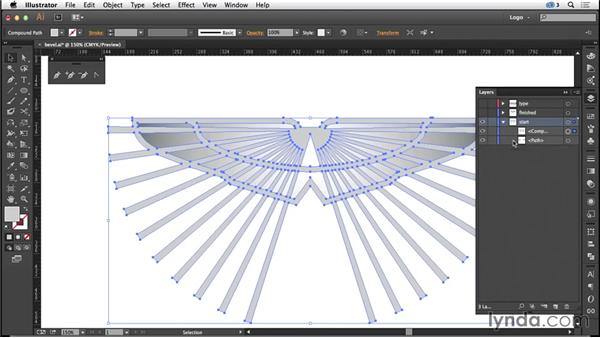 - [Instructor] Let's create this 3D bevel effect. I'm going to come to the Layers panel, I'm going to turn off the type layer, and the finish layer, and come to the start layer. The start layer is the shape of the wings. To create this, I traced half of it, and then reflected it, joined the two together, and we have applied to this a steel radial gradient. The gradients I'll be using come from the Gradients, Metals, Swatches.

And I also want to edit that width profile, so I'm going to come to my width tool, and make it a little wider as it reaches the center. Now, just before I go any further, let me say a word or two about the background. We're going to have three copies of this background. There's the one we're looking at, that will provide the background radial gradient. There's one that will become part of the whole structure of the whole pattern, and there's a third one that's going to go on top, that will be a clipping mask.

For now, I'm going to come to my Layers panel, and drill down to my start layer, the contents of my start layer. I'm going to lock the background shape that we have. I'll press R, to access my rotate tool, and then Alt-click on that anchor point. I want to rotate copies of that spoke through minus eight degrees. Having got one, I'll press Command or Control-D, until we bring it to the center.

I'll then press Command or Control-A, since I only have the one layer visible, I'm only selecting content on this layer, and I'm now going to reflect that across the vertical axis, making a copy. I will then select all of that, and we will group that together. Let's now come to our background. I'll select the background, and I'm going to copy it, and paste in front.

On the copy that is in front, I'll give it an eight point stroke, and no fill. I'll come back, and lock the original background. Now, I'm going to create an ellipse drawn from the center point, like so. This should have no fill, and the same gray eight point stroke. I'll press C, to access my scissors tool, and I'm going to break the ellipse there, and the equivalent point on the other side, and delete the top portion.

Now switch to the pen tool, come and pick up that open path, and connect that to the outside shape. As I do so, I'm going to click and drag, and I didn't quite get that right, I'm going to have to come and move that down in a minute, but I'll do the same on the other side. First of all, deselect the stroke, click on the open end point, and then click and drag. Let's just zoom in on this one. Select it with the direct selection tool. I'm now just going to nudge it down.

Also with the direct selection tool, I'll pull down that center point, and possibly just adjust the nature of that curve, like so. So I'm now ready to select all, and from the Object menu, come to the Path option, and outline the stroke, turning all of those strokes into fills, and then come to the Pathfinder panel, and uniting them all as one.

The next thing I want to do is clip all of the pieces of the art that go outside the wing shape. So I'll come to the Layers panel, we have this version that is locked. I'm going to select that, copy it, select what is now my compound path, and paste in front of that, Command or Control-F. Now, on the copy that I've pasted in front, this is going to become the clipping mask shape, but I need to first of all, let's set its fill to the 30 percent gray, and its stroke to the 30 percent gray as well, and we need to have an eight point stroke.

And I now want to expand that, so that it's just one shape that is the size of the artwork that we want to clip, and one more step before I can make it into a clipping mask, and that is to unite the, what was formerly the fill and the stroke together, now on my Layers panel, I can extend the selection to the compound path beneath, by holding down the Shift key, and come to Clipping Mask, Make.

Now, to add the bevel effect to the contents of that clipping group. So I'm going to come and click on Edit Contents. And then to my Effect menu, 3D, Extrude, and Bevel. Essentially, I want the position to be front, but I do need to add just a little bit of angle to it, so that we can really see the effect that we're applying. If I now turn on the preview, you can see, we're not really seeing much of an effect, and won't until we just adjust this.

I'll reduce that down to three, and then I'm going to change the lighting direction to be head on, like so. And things now do restore to something like normal. So when I click OK, let's keep it selected, but press Command or Control-H, to just hide the selection edges. So there we see the bevel effect, and I've deliberately made it as simple as possible, by reducing the number of blend steps. So I now want to add a gradient to my artwork.

I didn't want to apply the bevel effect to the artwork that had the gradient, because it would have rasterized the gradient, so my workaround is this. I'm going to expand that clipping group. I just want the contents of the clipping group selected, Command or Control-C, Command or Control-F. I'm now going to apply the gradient to that. Just before I do, though, let's remove the extrude and bevel effect from the copy, and then I'll come and apply the chrome gradient to that, and I'm going to change the blending mode to Overlay.

I'll press Command or Control-H to hide my edges. Now, I could go one step further here, and divide this, so that we get more of a reflection, and I think I'll do that. So I am going to go back to my layers. I find it useful to work with the layers here, when we've got some relatively complex artwork going on. I'll turn my edges back on. I'm going to lock that one. I just want this one here.

I'm also going to lock the clipping mask. I'll choose my Line tool, and just draw a line there, and then, let's move that line down, so with the line and the artwork that has the gradient applied to it, I'm now going to divide that. And that's going to allow me to select just that half, and I've double-clicked on that to get to my isolation mode, and then reverse the direction on the gradient.

Now, let's leave isolation mode. I'll come back to my layers, and I'll turn my type layer on, and there we have our finished version.

11/4/2014
Logos are a critical part of the modern visual landscape. To learn how to create your own, it's important to be able to identify the components and design techniques behind the most successful examples, from the Nike swoosh to the Coca-Cola ribbon. In this course, Nigel French deconstructs popular logos in order to explain why and how each logo works, and offers a methodical approach to creating a logo in Illustrator. This course combines theory with nuts-and-bolts techniques that emphasize simplicity and readability: the principles that ground the best logo designs.
Topics include: