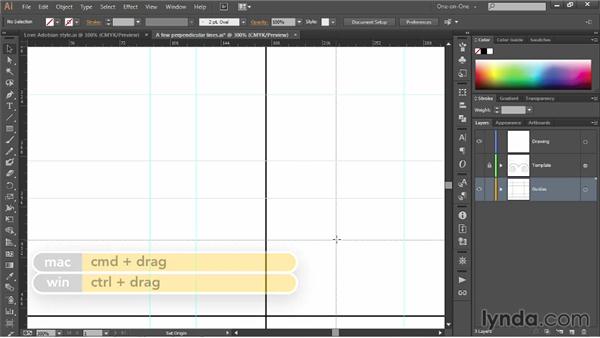 In this movie I'll show you a few different ways to create guidelines in Illustrator. And guidelines are just what you'd think they'd be. They're non-printing lines that help you snap your artwork into alignment. And they're really super useful for creating structured illustrations like this. And in fact, this final version of the artwork contains tons of guidelines. It. It's just that they're hidden. To bring it back up, go to the view menu, chose Guides and then chose Show guides. Notice that the command has a keyboard shortcut of Ctrl + Semi Colon or Cmd + Semi Colon on a Mac, which is not terribly memorable, but you gotta bear in mind that you're going to be choosing this command all the time inside of Illustrator.

So you may want to memorize this shortcut. And you could think of the semicolon as being a kind of dot followed by a dash in a dashed outline. Now, as soon as you choose the command, you don't get dashed outlines. You did back in the old days of Illustrator 1 when everything was black and white. You get cyan guides instead. And let's see how to create those. I'll go ahead and switch over to the starter document which doesn't contain any guides at all. I do want you to select the guides layer down here at the bottom of the Layers panel. If you're working along with me that's very important.

These lines, however, I drew with the Line Segment tool. And we'll see why, before we're done with this movie. But I'm going to start things out by showing you how to create the simplest form of a guideline, which is a ruler guide. To bring up the rulers, go to the view menu, choose rulers, and then choose show rulers, which has to be a ubiquitous shortcut in the design industy. Which is Ctrl + R or Cmd + R on the Mac. Now you just drag guides out from the rulers. So to create a horizontal guide you drag down from the top ruler and to create a vertical guide you drag to the right from the left hand ruler.

If I zoom in here a little bit you can see these tick marks. And the rulers get bigger and bigger. Notice, if I just drag down, then I'm moving my guideline freeform, so there's no constraints. What if you want to snap into alignment, exactly into alignment with one of these tick marks? Then you press and hold the shift key, and now you're going to snap From one tick mark to the next, like so. And it works the same way if you press and hold, keep that "shift" key down, when creating vertical lines, you snap to the tick marks on the horizontal ruler.

Illustrator also allows you to double-click on a ruler to create a guideline, and you do that by double-clicking on a horizontal ruler, which creates a vertical guideline, or you can double click on a vertical ruler... To create a horizontal guideline. You can even create two guides at the same time, one vertical and one horizontal, and you do that by dragging out from the intersection of the two rulers. Now you don't just drag I need to make this clear because if I just drag to a new location like I'll drag to the intersection of these two guides right there And release.

Keep the key down, release the Mouse button and then you can release the Ctrl or Cmd key. Alright, now I'm going to zoom out by pressing Ctrl + 0 or Cmd + 0 on a Mac. You can see that I've got a total mess. I don't want any of these guys. What I do want you to notice, just for a moment here, is that guidelines extend well outside of the Artboard . They extend all the way to the ends of the Paceboard, in fact, both the vertical guides and the horizontal guides as well. Any way, I want to get rid of them all. So, after zooming in, I'm going to go up to the view menu...

Choose guides and choose clear guides and that will delete all the guide lines but none of the other objects inside the illustration. Now at this point I have a very specific location where I want to put a guide line but I've messed up my rulers. That time I dragged out from the ruler intersection and let go of the Ctrl key or the Cmd key on the Mac I goofed everything up. Fortunately I can reset things by double clicking right at the intersection of those two guides. And now notice if I scroll down a little bit, there's my zero point and there's my zero point there.

So, in other words zero, zero is right there in the top left corner of the art board. And what I want to do instead, I'm going to scroll down a little bit here and then I'm going to zoom in by changing the zoom value down in the lower left corner of the screen to 800%. I just happen to know that works for me. And I want to find the numbers in the vertical ruler 498 and 504. There they are right there. And at this point, each tick mark indicates a full. Full point. So this guy right there, is 499, and this one is 500 points.

And, I want to create a horizontal guide at exactly 500 poitns. But if I double click right about there, well, it's not quite in register, is it? I didn't get it exactly right. So I'll press Ctl + Z, or Cmd + Z on a Mac, to undo that change. Instead what you do is you press the Shift key and double click, and as long as you're close to that tick mark as I am, then you will snap into alignment. Again, with the nearest tick mark. And that happens to be at exactly 500 points. Alright, I'm done with the ruler so I'll go up to the view menu and chose rulers and chose hide rulers. Which has that exact same keyboard shortcut, Control R, Command R on a Mac. Press Control 0 to zoom out.

Now, at this point, you may wonder, well, what are we doing with all these other lines? Well, I drew these lines because I wanted to create some guides. That were only as wide and as tall as the Airport and you can't do that with ruler guides, you have to do that with lines. And just to give you a sense of what I did, I grab the line segment toll there. I started dragging from the left hand side of the airport. Press the shift key and with all the way to the right hand side. And the Shift key constrains the angle of my line to perpendicular, either vertical or horizontal.

I don't want that guy. I just wanted you to see how I made it. So I press the Backspace or the Delete key on the Mac in order to get rid of it. Instead we're going to take all these lines that I've already drawn in advance and turn them into guidelines by going up to the Select menu and choosing All. Or you can just press Ctrl+A or Cmd+A on the Mac. That's one of those shortcuts everybody memorizes and now we'll have all these lines selected as you can then go to the View menu, choose Guides, choose Make Guides. It has a keyboard shortcut I am not even going to pretend you need to remember.

It's just there in case you want to. I'll go and choose the command and we end up with these criteria and you can see now that we've got series of guides that are only as big as the art board, and then we have one very special guide that's as wide as the pasteboard, just so we can tell them apart, because I have a very special use for that special guide in the next special movie.