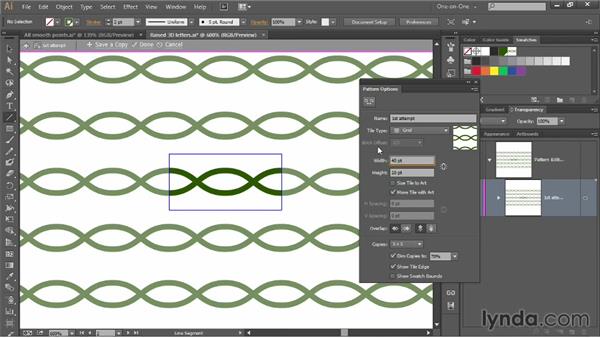 In this movie I'll show you how to create a basic pattern brush, that accommodates closed path outlines, that exclusively comprise smooth points. So no endpoints an no corner points. I'll go ahead an switch over to my starter document here. Which contains a total of three art boards. I'll switch to the second one by pressing Shift+Page Down. And if you're working along with me, you should see this shape right here. But before we apply a pattern brush to it, which we eventually will, we need to create that pattern brush. So I'm going to zoom in by pressing Ctrl+ or Cmd+ on a Mac a bunch of times.

Until I'm zoomed in on this empty portion of the art board. And then I'll grab the Line Tool and I'll click somewhere toward the top of the screen here in order to bring up my Line Tool Options. And notice that I'm setting the length to 40 points and the angle to 0 degrees. That way, we'll end up with a horizontal line. And the reason I'm working numerically is just so that I can retain as much control as possible. Alright, now click OK, in order to create that 40 point line and I'm going to increase the line weight to two points, like so. And then I'm going to click on the Strokes color swatch up here in the Control panel.

And I'll change it to this dark shade of green that I've created in advance. It's R32 G64 B0. For what it's worth you can of course go your own way, the color really doesn't matter. Now I want to make this straight line wave. By going up to the Effect menu to choosing Distort & Transform and then I'll choose Zig Zag. And just so I can see what I'm doing, I'll click on the Preview checkbox. I don't want this sharp cornery Zig Zag, so I'll change the points from Corner to Smooth. And I'll leave Absolute turned on, but I'll go ahead and take down the size value to just four points.

So we end up with this effect here. And then I'll Tab down to the Ridges Per Segment and take that value down to just one, like so. And then I'll click OK. Now I need to create a copy of this looping line in the other direction. And I'll do that by going up to the Effect menu, choosing Distort and Transform and choosing the Transform command. Which if you loaded dkeys, has a keyboard shortcut of Ctrl + e or Cmd + e on a Mac. And now I'll go ahead and turn on the reflect Y check box down here in the options area, turn on the Preview check box so I can see it flipped vertically, and I'll raise the copies value to one like so, and then click OK.

Alright, so that gives us our base pattern. Which will turn into a patterned tile by going up to the object menu. Choosing Pattern and then choosing the Make command. Again, if you loaded d keys, you've got a shortcut of Ctrl + m, or Cmd + m on the Mac. And if you get this alert message, telling you that the Pattern has been added to the Swatches panel, which I think is fairly obvious here. Then go ahead and turn on the, don't show again, check box. And click OK. An I'll go ahead an name this pattern first attempt because as you'll see, it's not going to quite work.

An then I'll drop down to these values here. Go ahead an turn off the link icon. Turn off the size title to check box as well, an then click in the Height value an just press Shift + Up Arrow. In order to take it up 20 points like so and that should more than separate these twirling lines from each other. Notice that you want to leave the width value set to 40 points, because, after all, that's the length of the original line and a can just press the Escape key a couple of times in a row here. In order to Escape out of the Pattern generator and save your changes.

Alright. Now we need to turn this pattern into a pattern brush. And you do that by going up to the Window menu and choosing the Brushes command. And then, make sure you have a little extra room to work with so you can see what you are doing. And click on the little Page icon at the bottom of the Brushes panel. And you want to select this final option Pattern brush and then click OK. And now I'll go ahead and name this brush for smooth paths only, because that's all it's going to accommodate the way we are making it right now. Now notice these five containers right here.

They all indicate different kinds of tiles that you can add to your repeating Pattern brush. You have to at least create what's known as a side tile which is the second option in. So go ahead and click on the Down pointing Arrowhead and select first attempt. Or whatever you called your Tiled pattern. Then you'll see this curious little pattern here. Now it looks like everything is completely messed up. But its not, everything's going to work out more or less fine. So go ahead and click OK to create that new brush, then press Ctrl + 0, or Cmd + 0 on a Mac.

In order to zoom out, I'm also going to hide the Brushes Panel and then I'll press the V key to switch to my black Arrow tool and I'll go ahead and marquee this region here to select this big circle, which obviously has a dynamic effect assigned to it. And if I switch over to the Appearance panel, I can see that, that effect is, indeed, zig zag. So, I'm already applying. A kind of zigzag pattern to this line. And I could achieve something that looks similar to what we're ultimately going for, by going up to the effect menu, choosing distort and transform and then choosing the Transform Cmd once again.

And I can see that i'm repeating these loops three times every quarter circle. Which means that I have a loop every 30 degrees. So if I were to change the angle value to say 15 degrees and then turn on the preview checkbox and change the copies value to one, I'd end up with this effect here. So you can see it's possible to get a similar effect by taking a different approach. However, you're always going to have more control if you use a Pattern Brush. So I'll go ahead and Cancel out. And then I want to keep a backup of this circle, so I'll press Ctrl+C, or Cmd+C on the Mac, in order to copy it.

Then I'll switch back to the Layers panel and I'll twirl open the Big Shapes layer here and I'll turn off that original path, the one that's currently selected. And then I'll press Control + F, or Command + F on a Mac, in order to Paste a Copy of that circle in front. Okay, just a couple of more things to do here. First, go up the Object menu and choose Expand appearance, which will end up expanding that path outline, but we still just have smooth points inside of this shape. Now you can apply your brush, either from the Brushes panel, or you could go up to the word Basic here in the control panel, click on it and that'll show you the list of your brushes and then you want to click on that Pattern Brush that you just created.

And then you'll end up with this effect here in which the brush appears to be repeated a total of three times. Now, it's possible you'll end up liking this effect, but assuming you don't, I'll show you how to correct your Pattern brush and avoid this problem in the future, in the very next movie.