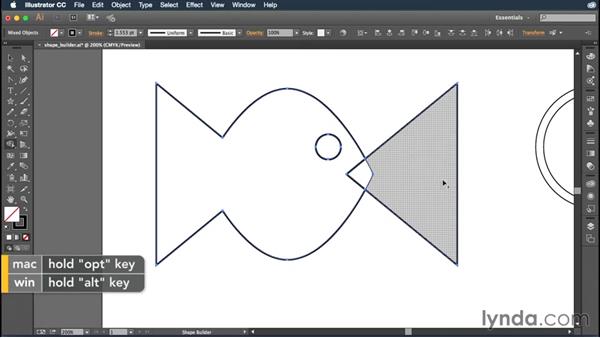 It's finally time to show you my absolute, number one favorite tool in all of Illustrator. It's called the Shape Builder tool, and this thing really blows away all of the tools we've been using so far to create complex pieces of artwork. Why? Because it's the most visual way I've ever seen to create paths in Illustrator. Let's take a look at how it works. First off, let's zoom in on this arrow in the top left-hand corner of the screen. What we wanna do is basically turn this into a single shape, right? We have a rectangle and we have a triangle, but together they make up an arrow.

And we need a way to merge those. But I don't wanna have to go through the set up of using compound paths, or I don't wanna get into the Pathfinder window, and then I have to figure out which mode to use, bla bla. That's just not something I wanna do. So, I'll select these and then I'll go over and grab the Shape Builder tool. And you can get this Shape Builder tool by pressing Shift and the letter M, as in Mary, on your keyboard. Once I select that, you will notice that when I bring my cursor out into the window, a little highlight appears on the shapes. That's indicating the area of the shape that I'm going to be affecting if I use the Shape Builder on that particular part.

If I want to join two pieces of artwork together, all I have to do is draw across them with the Shape Builder tool. In previous versions of Illustrator, the Shape Builder tool only worked in straight lines, meaning I would have to draw a straight line from here to here in order to make it work. But, with the latest version of Adobe Illustrator CC, all I have to do is simply draw anywhere I want. Just like that, a quick little stroke, and all of that artwork is now one, single shape. How cool is that? Let's pan over here, and let's take a look at the heart.

The heart's gonna work much the same way. However, when I hover over it, nothing's happening. Why not? It's because you have to have the two pieces of intersecting artwork selected prior to using the Shape Builder tool. So, hold down the Command key on the Mac, the Control key on the PC, and just draw a selection around the heart. Once you have a selection, let go of the Command key or the Control key. That's going to let you go right back to the Shape Builder tool. If I want to merge these together, I'll just draw right across 'em, like so.

Pretty simple. Alright, let's pan down, and let's go over here. You can probably tell that this is going to eventually be a fish, but you might not know exactly how we're gonna get there. So first off, let's make a selection by holding down Command or Control and selecting it. We already know how to combine shapes, so to add the tail to the fish, I'll just draw very quickly across those shapes like so. But I haven't really shown you how to subtract shapes yet. It's actually pretty easy. Hold down the Option key on the Mac and the Alt key on the PC.

You'll notice when I do that, that the plus sign turns into a minus. All you have to do is hold down that Option or Alt key while you're drawing, and it will automatically remove any objects that you draw over. So in this case, let's give this fish a little bit of color, just add a little bit of, hmm, let's make him green. And there you can see I punched a hole through the eye, cut out the mouth, and added the tail. Alright, our last challenge, over here on the right-hand side, the magical linking rings. This is my favorite exercise. I love how cool this is.

Let's go ahead and select this, and let's grab the Shape Builder tool. Now, it's totally up to you how you make the rings interact with each other. So I'm gonna let you have a little bit of freedom here, but I'll walk you through my process for doing this. The reason I love the Shape Builder so much now is because previously, it was kind of a challenge for me to do something like this, because of the fact that it only worked in straight lines. Now, though, I can draw just within the confines of these circles. Because it's a free-form drawing tool now, it makes it so much easier for me to do this. So, here's what I'm gonna do. I'm gonna make this ring overlap this ring down here.

Now, if you make a mistake, like there, for instance, I didn't link that properly, just Command or Control Z, undo, and it will automatically allow you to redo whatever you were doing. So now I have linked those rings together. I did nothing but have circles on screen. I didn't draw anything more complex than a circle. All I did was use the Shape Builder tool to link all of these together. And these are just now individual shapes. You can see, as I click on them, they're all individuals, and I could start assigning colors to them. So let's do that, just so you can see how it works.

So, I'll click this one here, and let's make this one yellow. And then we'll click the other part of it, make it kind of the same yellow. And we'll do this one, we'll make it kind of a light blue. And then the bottom one here, we'll make it red. There we go. So now you see, they're all just individual shapes the Shape Builder is creating, and that is all there is to it. So really and truly, you're only limited by your own imagination here. Think in terms of basic shapes, and how you can turn those basic shapes into something really cool and complex, just by drawing over it with this tool.