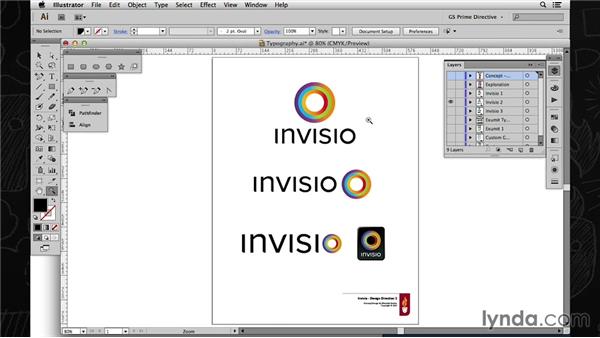 Join Von Glitschka for an in-depth discussion in this video Crafting a visual identity: Typography, part of Learning Logo Design.

When it comes to logo design, craftsmanship is paramount. I say that because you can spend a lot of time researching a clients business, product or service and gleen information that will help you uncover insights and make connections that lead to unique concept. But that idea can still fall short and fail if it's not crafted well. The lifelong challenge for every designer is to do both well. Smart research and thinking combined with equally impeccable attention to detail when crafting your visual identity. Let go over four areas I feel are essential to creating a strong and well crafted logo design.

Whenever I work on a logo design project, one of the first things I do when I move to vector and I start building out my designs is I think through the typeography I want to use. When selecting typeography, you want to look for type faces that reinforce a concept or goes with the style, the graphic mark you're creating. So here you can see three different logo projects I've worked on. I'm going to zoom in so you guys can see these better. This was one for it was like an interactive virtual surgery application that doctors can use and practice with.

And so on this one I picked a typeface that was clean. I think a clean hospital type environment so I picked a nice sans serif typeface to reflect that. But you can also see that I used shape recognition. In terms of the letter! to add this scalpel into the design. So that's how I used typography to reinforce the concept of this visual identity. Now if we go down to the next one this is a national youth flag football league and the name of their league is called Play Flag Football, that's their brand.

And so the type in this one, it's a subtle reference but using an italicized type face to represent you know, the motion and movement of the game that this whole business represents. And on the final mark here regarding a typography and reinforcing a concept Is this is where I got more customized. it isn't an existing font. this specific word for fire started off as a simple sans serif font. But I went in on it and added in this circuitry type of detail just to reinforce the aspect that this group, this mark, what it represents is a robotic's group and it's called Friends in Robotic Engineering is what FIRE stands for. And so I used typography in that respect to reinforce the core concept of robotics. So in terms of the, the next aspect when I first approach a project though, if I'm not quite sure what typography to use I'll just start typing out different font styles in the words that I need to create.

And that allows me to then Zoom in on these and really look at how the letter forms appear. And this helps me to distinguish which specific typefaces I want to use on a given project moving forward. And on this project, this was for a company that does trend forecasting on colors and what colors are popular right now, and it was called Invisio. And so these are all the fonts I kind of took a look at when I was trying to determine what type face I wanted to use on the design directions I was going to provide for them. And so I was able to take some of those directions in terms of typography and use them on this one approach was one of the directions I pitched to them. Here's another one, now on this one it's a sand serif type face. But if I zoom in on this, you can see that I've added these subtle these subtle roundings on the detailing on these letter forms.

And it's that kind of customization that I almost always do. When we're talking about typography in case of visual identity. I try not to leave it just a distinct font that anybody could type out, and come up with the exact same image. So I tried to always customize letter forms in terms of that type of detail. Here's another one where I took an existing typeface and, on this specific typeface, if we go back to the ones I chose. I can zoom in on the one that I derived that from which is this one.

It was a thinner version than this one, but you can see the detail on the n letter form right here specifically. I didn't want those notches in it so when I moved to my direction and created my type, I took those notches out, and I actually thinned out the type and made it a little more tall and condensed. So that's how you can use typography as a starting point and then go from there to customize it to really make a custom visual identity.

Now, sometimes, when I start off, just to give you an idea of how this process works. This is the font I started off with. It's called Banda Bold Font. And when I typed out this word, this for a social media A company called exumit, and this is the word I typed out. This is what it looks like in the raw font format, and I didn't want to keep it there because, once again, anybody could type that out and get the exact same logo type. So what I did is I started with this font, and then you can see how I customized the letter forms.

By merging them together to form one distinct logotype made up of almost one continuous line, and then down here shows how I detailed it out with color and a thicker outline just to add a little more thicker characteristics to it. And if you look at the specific directions we pitched to them. This shows how I fleshed that out with different colors and different iconography marks to represent the various services that this company offers.

Another direction is this one. Now, this isn't a font. This didn't start off as a distinct typeface I just created this just from raw, basic shapes. And there's going to be another movie in this course where I'll go over how you can do that. But in this case, I just use simple, basic shapes, made up of circles and squares, to form this type solution for this specific direction. Sometimes on a logo type project you won't use a font at all.

So all of these design solutions for, were for different clients. This one was for, specifically for a, a Disney, owns a kid's program called the Skrumps. So I created this. It's all drawn by hand and just built in vector form. So it didn't start off with any font whatsoever. And sometimes you'll want to do this. You won't want to start off with anything preexisting. You'll want to make it completely custom. Here's another one. This was exploratory for an energy drink by Pepsi called Fuelosphy, and this was the exploration I created for that. This last mark was a visual identity for a collaborative art group down in Southern Florida and they call themselves Work Happy.

Just a bunch of artists who share the same space and create a lot of cool stuff. So, that's how you can think about Typography, when you start on any type of visual identiy project, and just make sure to thoroughly explore all the various options of, of type styles and make sure that they align with the graphic you're creating.

6/28/2013
Avoid pitfalls, improve your design process, respond to demanding clients, and solve the creative problems that are involved in creating a logo. In this course, Von Glitschka shows you how to take care of the nitty-gritty, like quotes and contracts, and critical design decisions involved in building a brand identity package. Learn to define your client's expectations before the project begins with customer briefs and mood boards. Find out what the attributes of a great logo are, where to look for inspiration, and how to use sketches to propel you through the design process. Then Von turns to the business side and explains how to present your designs to clients and follow up on both positive and negative feedback. Finally, learn how to launch the logo and develop a narrative that will keep the visual style of the brand intact in the future.
Topics include: