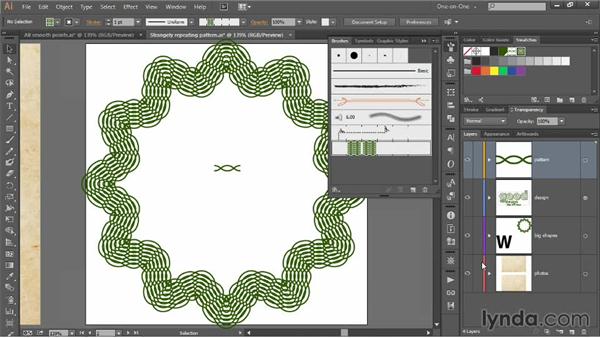 In this movie, I'll show you how to correct this Repeating-Pattern brush, and I'll also show you how to anticipate this problem so it doesn't happen in the future. So, make sure that nothing is selected on your screen, and then what you want to do is make a copy of this existing pattern swatch. By dragging it and dropping it onto the little page icon. Then double-click on the duplicate and we'll rename it second attempt. Because after all this is what it's going to be. Now you'd think the pattern would only repeat, if we see duplicates of it inside of the blue tile boundary.

So for example if I were to take the height value down precipitously to, let's say six points, looks good, then we do have repeats inside the little boundary. And now if I press the Escape key a couple of times in order to accept this new pattern. You can see that it's updated here inside the Swatches panel. Now to apply it as a Pattern Brush, go up to the Window>Brushes in order to bring up the Brushes panel. Then just go ahead and double-click on that Pattern Brush you created in the previous movie and change its side tile from first attempt to second attempt like so, and then click OK.

Now if you click the Leaves Strokes button, which activate by default. Then Illustrator will leave the existing path outline alone. And it'll create a new pattern brush as you can see here. That's not what I want, so go ahead and press Ctrl+z or Cmd+z on a Mac to undo that change. And I'll double-click on this guy again and switch that side tile to second attempt, then click OK and next click Apply To Strokes. Notice that goes ahead and updates the existing brush pattern and it applies it to that stroked path outline as well. And now you can see, by virtue of the fact that we had a small amount of repetition inside of that pattern tile, I'm now repeating the brush a total of seven times.

So what in the world gives? Well, you have that preview there inside the pattern brush options dialogue box. So this guy is telling us that we've got some repetition, but you can also tell based upon the appearance of that swatch, there inside the swatches panel. And I'm going to go ahead and make my swatches bigger by choosing Large Thumbnail View, so you can really see what's going on. So notice, that we've got a ton of repetition going on inside this little tile. And the fact that we're seeing those looping lines repeat, a total of seven times inside that second swatch.

Even though they're cut off a little bit, we've got seven complete repetitions, when the pattern brush is applied to a path outline. The same goes for our first guy. We have three partial versions of the looping lines there, and as a result we were effectively repeating that pattern brush three times. So what's the solutionWell let's go ahead and hide the brushed panel for a second. I'll go ahead and make yet another copy of first attempt by dragging it and dropping it onto the little page icon there. And I'll double-click on the new duplicate, and I'll go ahead and call it, not surprisingly, third attempt.

And what you want to do now is increase the height value. Make sure it's not linked to the width value, and then increase that height value just by nudging it up by pressing the up-arrow key until our repetition disappears, which for me happens at a height value of 23 points. But I'm just going to go ahead and take it even higher to 25 points. And what I should tell you is this little tile here, it's a representation as a swatch, only affects the pattern brush, it does not otherwise affect the behavior of a tile pattern. Anyway, at this point, I'm going to press the Escape key, a couple of times in order to create my new pattern, and then I'll return to the Brushes panel, by clicking on that little icon there.

And I'll double-click on that Pattern brush and then I'll change it's side tile from second attempt to third attempt, this guy right there. And you can see in the preview that we no longer have any repetition. And to confirm that is indeed the case go ahead and click on the OK button. And then click the Apply To Strokes button as well in order to update that shape in the background. And that friends is how you correct a pattern brush so that it no longer repeats, assuming of course that's what you want to do here inside Illustrator.