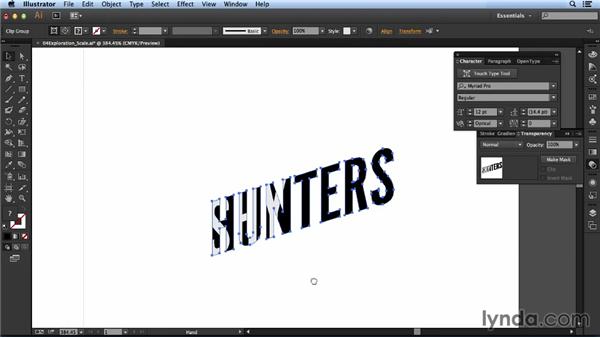 Join Nigel French for an in-depth discussion in this video Combining the words, part of Designing a Logo for a Band.

I now want to explore different ways of combining the two words, to see if there's any better solution than what I currently have. And for this first version, I'm creating an interaction of the two, using transparency. And I think this is interesting, it doesn't work, but it was worth a go. Basically I'm making the transparency of the word SHY 50% and then overlaying it on top of the word HUNTERS. So, suggested by that, how about if I were to open up the space between the letters to allow enough room for the word SHY to be inserted into the word HUNTERS, and I'm going to just show you how I did this.

I'll copy that to the top layer so we have that to refer to, I just held down the Option key as I dragged away from it, and then I'll come select this, Cmd or Ctrl+T to bring up my Character Panel, and set the kerning back to its default state. Now when you are applying kerning and tracking you'll want to check this preference I press Cmd+K to bring up my preferences. Type it's this one right here, I'd suggest that you set it to a smaller value than the default which is 20 and I'm setting it to it's smallest value of 1, now that is going to mean that I move in very very small increments.

If I want to move in larger increments, specifically five times whatever is my preference, I'm going to need to hold down an additional modifier key. So the keyboard shortcut to go in standard increments is option or alt and the right arrow. Now, I want to move in bigger increments so it's option command and the right arrow. Opening up enough space between the H and the U to accommodate the H of shy, and then moving the cursor between the U and the N, and doing the same thing to a lesser degree to accommodate the stem of the Y.

Another option I explored, and I'll come back to this one at the end, was putting the word shy inside the word hunters. We'll return to that one, we could have one word outlined, one word solid, we could inverse that relationship. We could have one word small and one word bit, and this is the obvious way around of doing it, shy small, hunters big, and we can do that the other way around. But now to return to this version, which, I like the concept of it but it's just not really very readable.

It's interesting so I'm going to show you how to do this. And I'll begin with this which I'll now just duplicate down to an empty slot holding down Option. Dragging away from it, and I'm going to set the fill color to black and the stroke color to none. Now, we want to put the word shy inside the word hunters, actually, let's select shy and we'll make it 50%, and then I'm going to convert Hunters to outlines.

Cmd+Shift, or Ctrl+Shift+o will do that. And I now want to position that over the word Hunters. It needs to be in front, so if it's not in front, press command, shift, and if your right square brackets to bring it to the front. Now I will select the two, Cmd or Ctrl+7 will make it into a clipping mask. Now that doesn't work, it doesn't work, because I first need to convert the word hunters to a compound path. So I'll deselect select just this word Cmd or Ctrl+8 on the Object Menu> Compound Path>Make.

Having done that I can now select the two, command or control seven will make it into a compound path. I am now going to set the word hunters back to give it a fill color and we'll set that back to I need to select just that by itself and that's going to be easiest if I use the layers panel, we can see right here on the layers panel my clipping path. And I want to just select the clipping part itself, I'm going to set that to being black.

Now, if I want to select the contents of that, with the object selected, I can come to my Tool Options, click on Edit Content, and I might want to just scale this up a fraction. Or I might want to move it a fraction, just to make it a little bit more readable. And as I'm doing that I'm selecting the wrong thing by mistake so I'm just going to use my cursor arrows here in order to move it. And, as I say, I like the idea it, but it's just not reading, so that's another failed idea but, an experiment I feel was worthwhile.

So, I think what I take from this is that I have not really come up with any better solution than when I started with, but at least I now have the confidence of knowing that I experimented with a few other options.

5/6/2014
A great band deserves a great logo. Think about The Grateful Dead's dancing bears or The Rolling Stones' "hot lips." Or even The Beatles: their famous logo is just a simple text-based design with a drop T. As a designer, your responsibility is to come up with a variety of logo ideas for your clients and hone in on and finesse the best one. In this course, Nigel French uses a client brief from Brooklyn-based band Shy Hunters, and shows how to evolve rough sketches into great logo designs, anchored by typography and highlighted with imagery. He also shows how to prepare variations on the design and format the logo for different uses, such as print, websites, and social media.

Want more information about building a solid logo? Check out Nigel's Designing a Logo Topics include: