Combining a letterform with a path outline 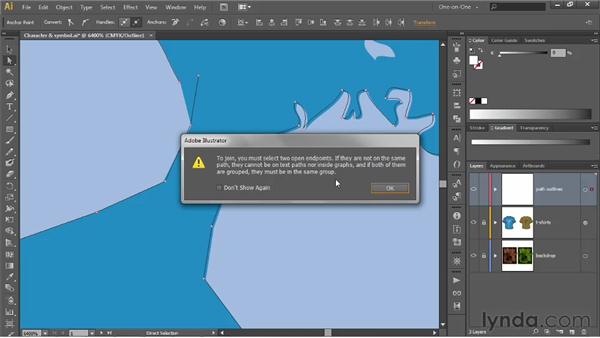 Join Deke McClelland for an in-depth discussion in this video Combining a letterform with a path outline, part of Illustrator CS6 One-on-One: Advanced.

In this movie, I will show you how to combine a letter form with a predefined symbol to create a custom character of type. Now notice that I still have my path outlines layer set to the Outline mode and my other two layers are set to the Preview mode. And if you were to open this illustration, you would see exactly the same thing because Illustrator goes ahead and saves the preview settings along with the document. Now in our case, what we want to do is keep the interior of the O and merge it with the outside of this Grime symbol. So that means we need to get rid of the outside of the O.

And we need to move a few anchor points around. So I will marquee these anchor points right there and Shift+marquee these ones and then Shift+click on these final three; but notice as soon as I try to Shift+click on that endpoint, I end up selecting this curve segment above it instead, which means if I start dragging the anchor points around, I am going to stretch the selected segment. I don't want that, so I will press Ctrl+Z or Command+Z on the Mac, to undo that maneuver. Now I will press the Shift key and marquee right around that anchor point like so, in order to both select the anchor point and deselect the segment.

Now we have got to create a hole in the path outline that was formerly that Grime symbol in order to create this channel right here through the O that appears in dark blue. So I will go ahead and marquee these anchor points there and then Shift+click on this second point to select it as well. And I will press Backspace key or the Delete key on the Mac, in order to get rid of those points. And now I will marquee these anchor points in order to select them, Make sure just those anchors points are selected, you don't want to select part of this guy. And then drag this endpoint so that it snaps into alignment with this one.

Now, what we want to do, and it seems like it should be simple, we just want to go ahead and join these two endpoints together so that we are combining the inside edge of the O with the outside Grime path outline. So I will go ahead and marquee those two coincident endpoint--that is, one is directly on top of the other--and then I will go up to the Object menu, I will choose Path and I will choose Join or you can press Ctrl+J or Command+J on a Mac. Now the Join command was dramatically enhanced in Illustrator CS5, but it still is not perfect.

You are going to run into times where illustrator gripes at you. And this is a classic example. As soon as I choose Join, I get this alert message that starts off, To join, you must select two open endpoints. Which is not only not entirely true, but is not accurate to our situation at all because that's exactly what we've selected is two open endpoints. To get a sense of what's gone wrong in our case, you have to read the very end of last sentence where it says, if both of them are grouped, they must be in the same group. Our problem is that one of our endpoints is inside of a group and the other one is inside of a compound path; and as a result, Illustrator refuses to join them together.

You should not turn on the Don't show again checkbox, because if you do, and you run into this problem in the future--which you will-- then instead of getting an alert message, Illustrator will just ignore you, which I can tell you is extremely confusing. So just go ahead and click OK. And now here's how to solve the problem. Press the V key in order to switch to the Black Arrow tool and then click off the path outlines to deselect them. Now click on the outside edge right there in order to select it. What we want to see is the word Path over here on the far left side of the Control panel; instead, we see Compound Path, which is going to create a problem when we try to join one path to another.

Our only option is to release the Compound Path by going up to the Object menu, choosing Compound Path and choosing Release. Now you want to make sure by the way that you are not releasing any holes or creating any problems. In our case, we are fine. So go ahead and choose the Release command. Now we hope to see the word Path on the far left side of the Control panel and instead we see Mixed Objects, which means anything; we could have some paths selected, we could have a group selected, don't know. So click off the path outline to deselect it, click on it again to select it and now I see Group.

So I release the Compound Path only to be confronted by a group, which means I now have to go the Object menu and choose the Ungroup command or press Ctrl+Shift+G or Command+Shift+G on a Mac; and now I've got a path. Excellent! Now what you want to do is click on the inside path outline. And you can see that it is a group over here on the far-left side of the Control panel. So go back to the Object menu and choose the Ungroup command. And now notice we have got a Compound Path. Now here's the thing, you don't want to just release the Compound Path; because if I zoom out, which I did by pressing Ctrl+0 or Command +0 on the Mac, notice we've got holes in the Es and they are currently selected.

So if you were to release those Es as compound paths, then we would release the holes inside the Es as well. Don't want that, so click off the path outlines to deselect them, then click on the inside edge of the O, so just it is selected. It is still a Compound Path, but we can release it with impunity. So go up to the Object menu, choose Compound Path and choose Release. Now for the drum roll please, let's go ahead and zoom in here at this location and I will press the A key in order to switch to my White Arrow tool.

You can see that now we just have a path outline selected, which is just about all that the Join command can accommodate. So I will marquee these two coincident endpoints. We will go up to the Object menu, choose Path, and choose Join, and sure enough that goes ahead and works. And if I click off the anchor point, click on it and drag it, you can see where we formerly had two independent endpoints, we now have a single interior point. All right! I will press Ctrl+Z or Command+ Z on a Mac to undo that move. Now we have just two endpoints left and that's these guys right here.

So I will go ahead and drag this anchor point until it snaps into alignment with the other one, then I will marquee the two anchor points to select them both and I will press Ctrl+J or Command+J on a Mac, in order to join them together. The deed is now done. Let's go ahead and take a look at our work. You can switch back to the Preview mode by pressing the Ctrl key or the Command key on the Mac, and clicking on that hollow eye in front of the path outlines layer; or you can just go up to the View menu and choose the Preview command to switch the entire illustration back to the Preview mode. Now I will press Ctrl+Shift+A or Command+Shift+ A on the Mac, in order to deselect my artwork.

And I will press Ctrl+0 or Command+0 on a Mac, in order to center my zoom. And that folks is how you combine a letterform along with a predefined symbol to create a custom character of type.

Video: Combining a letterform with a path outline