Combining the cover image and the masthead 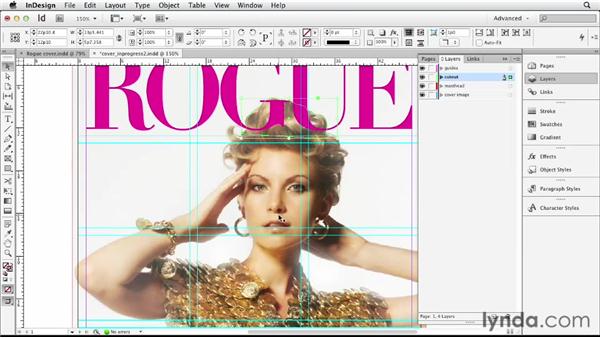 There are several approaches for combining the masthead with the model's head. We're going to overlap the top of the model's head with the masthead, and since we're focusing on an exclusively InDesign workflow, I'm going to achieve this all within InDesign, so here is where we left off. Actually, I have to admit I have slightly moved the model to the right from the previous movie, just so that it corresponds in its location with the finished version here, and all of the other elements that I'll later add will fit in the same way as they do in this finished version.

So we're in cover_inprogress 2, and I'm now going to switch to my Pen tool by pressing P. I'm going to zoom in on the area that we are concerned with so that we can see a nice crisp rendition of the picture. I'm going to come to Display Performance and choose High Quality Display. Now I need to draw myself a pen path around this portion of the hair. I'll start just outside of that area. The pen path I'm drawing currently has a black stroke. I'm not really concerned with that at the moment.

Ultimately, the stroke will be set to None. I'm going to turn off the masthead layer so that we can see exactly where we're going with this, so I'm clicking, and to make the curved points, I'm clicking and dragging. When I get to about here, I can then click back on my starting anchor point, and that will close the path. Let's turn the masthead layer back on. I'll now change the stroke color to None, so I'm making sure I'm on the Stroke property, I'll press forward slash, then I'm going to create a new layer, and I'm going to move this pen path to that new layer, rename the layer cut out, and I will move it up above the masthead layer.

Switching to my Selection tool by pressing the V key, zooming out, I will come click on the content selector of the cover image to select the picture and copy that. Now come to the cut out layer, click on that to select the pen path, and from the Edit menu choose Paste Into. Now let's zoom in on that area, I'll click outside of the pen path to deselect it and press the W key to hide the guides.

So a potential drawback of this approach, staying exclusively within InDesign to do this is that using the Pen tool, we don't get the chance to make a subtle mask of the hair against the background type, and we can see that there's a slight problem here because we are not seeing through the negative space that's trapped within these colors of hair. If we want to do that, then we need to go and do this in Photoshop, and I'll be doing that in a later movie, but for now I'm going to leave it as is.

This is going to be relatively small, and perhaps we can get away with it. We could also just reposition the model so that we sort of designed our way around the problem, but I'm going to leave it as is. I will just make a minor change to the pen path, press P to select my Pen tool again. Just so that I make sure I'm only selecting the content that I want, I'll lock everything but the cut out layer Making sure I'm on the cut out layer, I can then select that point right there, and that point right there, just so that we don't see a white outline around the top of that curl of hair.

And then finally, this effect is achieved by using two separate layers. We have the image in one custom-drawn picture frame that sits exactly on top of the whole image. Obviously, it's very important that the relationship between these two doesn't get disrupted, so I'm going to lock both of those, just to make sure that that can't happen.

10/8/2012
What makes a good magazine cover? Author Nigel French examines the design of magazine covers, dissecting the cover and explaining the purpose of the different components that make up the whole design. He then covers the design process from start to finish in Adobe InDesign, going on to show alternative workflows that exclusively use Photoshop and Illustrator. Each workflow shows you how to place and scale your image, position the masthead, add cover text, and package the end result as a print-ready PDF.
Topics include:

Video: Combining the cover image and the masthead