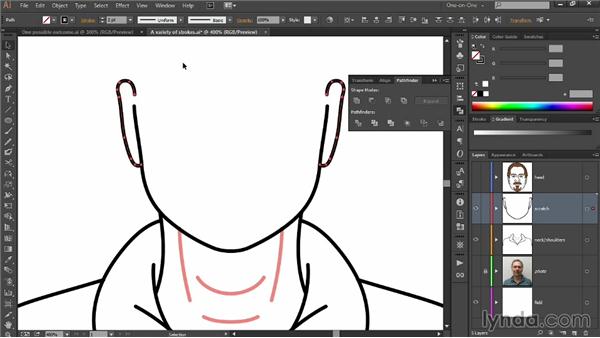 Join Deke McClelland for an in-depth discussion in this video Coloring areas with Pathfinder operations, part of Designing Your Own Online Avatar.

…In this chapter, we're going to begin…the process of coloring and shading the avatar.…In the movie, we're going to color my face with the help of a Pathfinder operation.…So, the first thing we want to do is select the…shapes that represent the outside of the face which include…the ears, so I'll go ahead and click on the…path outline for one ear with a black arrow tool.…I'll shift-click on the other one to select it.…and I'll shift-click on each of the jaw shapes to select them, as well.…Now this point is going to be easier if you work on an independent layer.…

So I'll drop down to the little page ICON at the bottom of the layers panel.…And I'll Alt+click or Option+click on it…to bring up the layer options dialogue box.…And I'll call this layer 'scratch' because it's just a temporary layer.…And I'll change the color, let's say, to light red.…And then I'll click Okay.…And now I'm going to move that scratch layer to below the head layer.…Now let's say I want to create a copy of these…path outlines, with the selected path outlines on a scratch layer.…