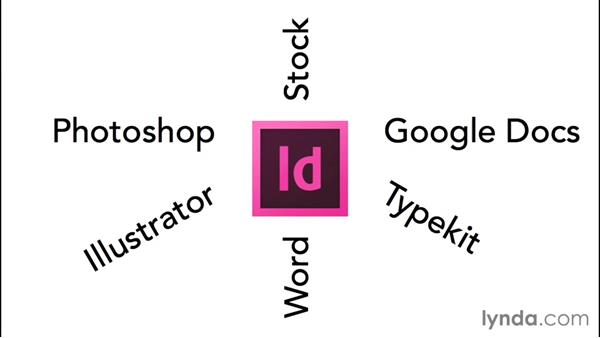 - I've been joking for years about how my two favorite InDesign plugins are Photoshop and Illustrator, but I have to say that I'm really only half joking because virtually everything I do in Illustrator and Photoshop feeds into InDesign. So, it's not that those programs are any less important than InDesign, it's just that I consider them add-ons to InDesign. You know how in a wheel, there's a hub and then lots of spokes that feed into it? For me, InDesign is the hub, and Photoshop and Illustrator are the spokes.

Alongside many other tools that I use like Word, Google Docs, Typekit, and so on. Now, I'm not saying that InDesign should be your hub. I mean, if you're a photographer, then Photoshop or Lightroom is probably your hub. If you design packaging, there's a good chance that Illustrator is your hub. For me, InDesign is the center of the universe. Well, at least the center of my work universe. But InDesign just doesn't do everything that I need, or sometimes it does, but not as well as another tool.

For example, InDesign has a pen tool, and that's fine for little tweaks or simple drawing, but if I were drawing a logo or tracing a graphic or trying to create anything complicated out of vectors like making a gradient mesh, or extruding into 3-D, well, then I would want to switch to Illustrator. If I need to edit a bitmap image, like a photograph. Like maybe I want to make an image lighter or darker or retouch it somehow. Well, then obviously, I'm going to want to use Photoshop.

The good news is that Adobe has made it really easy to move back and forth among these apps and even move whole groups of objects and images back and forth. That's what I'm going to focus on in the next few chapters. There are some gotchas, things that aren't obvious or ways that you can get yourself into trouble, but I'll warn you about those when we get to them. The most important thing is that you remember what I call Blatner's three rules of publishing. First, figure out what's your hub. Where do you want to spend the majority of your time? Part of that is knowing where your documents or images are headed.

Next, one of the ways great InDesign professionals stand apart from the crowd is not by working harder, but by working earlier. That is, by taking time now to set up your colors, your styles, and think through your workflow, you're going to save a lot of time later when you have to make changes. Finally, in today's quick paced work environments, you need to stay flexible and be able to change your mind or have your boss or your client change their mind without driving you crazy.

So, a lot of what I'm going to be talking about in this course is about workflows that keep your options open as long as possible. For example, I'll explore why you should keep your Photoshop images in RGB as long as possible and why you should use native file formats, like PSD and PDF. Okay, enough with rules, let's jump in and do it. Let's see how we can make InDesign, Photoshop, and Illustrator play nice together as a team.

9/17/2015
Switching between the "big three" graphic design programs in Adobe Creative Cloud can be riddled with tiny difficulties. But with a few simple workflow adjustments, you can smoothly integrate Illustrator and Photoshop artwork into InDesign, and vice versa.

Here David Blatner, cohost of InDesign Secrets.com, goes over placing images from Illustrator and Photoshop, copying and pasting InDesign artwork, managing color and transparency, and dealing with linked images, vectors, layers, and more. By the end of the course, you should be able to move seamlessly between the three tools, getting the results you want and without losing formatting, sharpness, or quality.
Topics include: