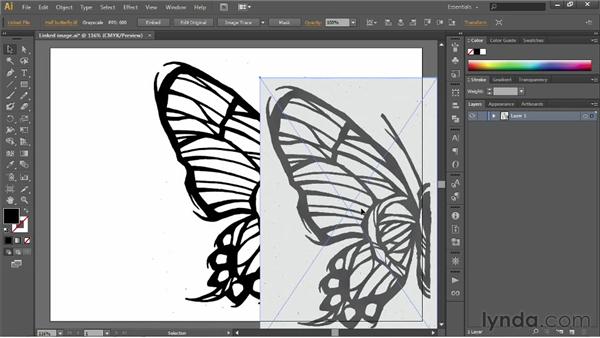 In this movie, I'll show you how to automatically trace an image inside Illustrator, and we'll also see the significant impact of resolution on the quality of the final trace Artwork. And by the way, what I'm about to show you works just the same whether you embedded the image using the Open Command, or you're linking to the image via the Place Command so that part doesn't matter. I'll go ahead and click on the image with a Black Arrow tool in order to select it. And for the sake of demonstration here, I go up to the Edit menu and choose the Copy Command because I want to have a copy of the image come back to in just a moment.

I'll go up to the Control panel and notice this button right there Image Trace all you've to do is click on it, it really is that simple where tracing line art is concerned. In my case however, I end up getting this alert message that says tracing may proceed slowly with this large image file. Would you like to continue? And now why is it calling it a large image file, does look that big on screen. And we're seeing the document at 116%, at least the screen is probably at higher zoom ratio on your screen, so it really isn't all of that large.

Well, here to do his notice the Resolution value appear in the Control panel we're seeing that this is a Grayscale image, by the way, it doesn't contain any color and the PPI pixels per inch is 600. That's a 600 pixel per inch image that is a very high Resolution File. We need those Pixels? Now you don't necessarily need 600 pixels per inch, but you do want 300 pixels branch a better to get a good trace especially when you're working with line art, I'll show you the difference in just a moment.

Then offers this helpful advice which, by the way is very bad advice, and I'll demonstrate that but it says, to reduce the image size, rasterized to a lower resolution using essentially the Rasterize Command under the Object menu. Well, this a little bit misleading. rasterized means convert to pixels this image is already made of pixels so by definition it is a raster files so we don't need rasterized it where you can do using the Rasterized Command under the Object menu is reduce the resolution so essentially re-rasterized a file.

When you might want to do Is Say Don't Show Again because you never want to do this however I'm just going to click OK in order to Trace File latency. Now you can see we get a lot of progress bars so it does take a little bit of time to trace that image but goodness we get good results. We've got a little bit of noise, and I'll show you how to trace that shortly, but the quality is just great. Now compare that to what would happen if we followed Illustrators of advice, and I really want you to see the difference here. So that you have a sense of what kind of difference resolution makes when you tracing in important image so I am going to up go to the Edit menu and choose Paste In Front in order to pasta that image in front of itself.

So here's the original image once again, and we can see the trace version of the image in the background and go and press Control+Z, or Command+Z on a Mac, to undo that move. Then the following Illustrates advise once again, we'll go up to the Object menu, and I'll choose the Rasterized Command. By default, the Color model CMYK we really that this is a Grayscale Image so we don't need to add a bunch of color to file, that will just make the final document size much more massive and that will actually slow down the tracing process as well so I am going to select Grayscale.

And in Resolution High would be 300 ppi well let's go ahead and make things as effortless as possible for Illustrator by reducing the Resolution to screen which is 72 ppi. And there was a day were Adobe use to officially recommend that this is where you work. And we don't need to worry about the other options, so I'll just go ahead and click OK in order to reduce the number of pixels or what's known as downsample that image. And you can see that it's looking a lot more choppy if I zoom in here. I'll go up to this Image Trace button, and I'll go ahead and click on it, this time we don't get a warning we not get any progress bars we get a trace lickety-split.

Problem is it doesn't look nearly as good as see saw a moment ago so just for the sake of demonstration, I am going to go ahead and zoom in here. So that we can see the half of head of the insect and the wings and so forth. I'll go ahead and twirl open, this tiny layer here inside the Layers panel and so I have got an Image Tracing on top. I'll go head and rename that guy 72 PPI, and then an image tracing a bottom I'll go ahead and rename this one 600 PPI. And now, I will turn off 72 PPI, so you can see the difference.

This one the 600 PPI tracing has so much detail associated with it. Yes it has some noise but it doesn't look like a tracing at all, it has all this wonderful natural detail that's essentially maintaining sort of the organic nature of my line drawing. So it looks like an actual line drawn the advantages I am going to be able to scale it and do all kinds of stuff to it as we'll see in future movies. Whereas, if I go and turn on the 72 PPI version, this looks like so, old-school tracing from the late '80s early 1990s, and this stuff is just give away.

When people see this anymore I think they automatically recognize it as being badly traced vector. And it also, by the way, doesn't reflect well on you because it shows that you machine traced your Artwork which isn't really very accurate because you created presumably this original Illustration, so you worked really hard on this line drawing, and just brought it into Illustrator to do a good job of the Vector Trace. So what it comes down to is Illustrator's Vector Tracing Function is awesome. This new Image Trace Function in Illustrator CS6, fantastic feature.

However, it'll always give you better results when you work with high-resolution images meaning 300 pixels per inch or better.