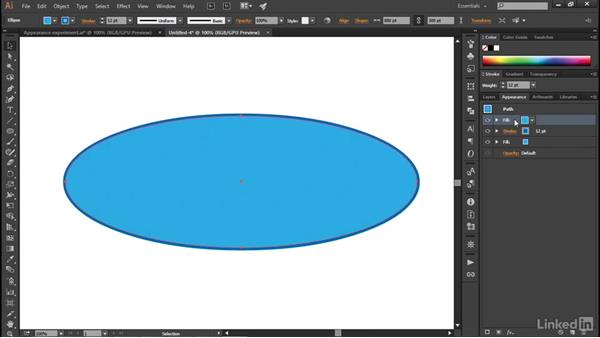 - [Voiceover] So the primary purpose of the Appearance Panel is to allow you to assign multiple fills and strokes to a single path outline. So while this may look like multiple, albeit random ellipses, it's actually just one, as I can confirm by going up to the View menu and choosing the Outline command, or of course we have that keyboard shortcut of control Y or command Y on the Mac. So whenever you're looking at a document in the outline mode you're seeing the core path outlines and nothing more, but if I press control Y or command Y on the Mac, I see the fill strokes other dynamic attributes.

And so, let's see how it works. I'm gonna go up to the File menu and choose New From Template. And for those of you who went ahead and created a template along with me back in the Fundamentals course, then you can go ahead and select that RGB with center guides .ait document or the like, and then click on the new button in order to open up that new center guides document. Alright, now go and switch from the Rectangle tool to the Ellipse tool, and then I'll just go ahead and alt click or option click at the intersection of those two guide lines, and I'm gonna enter a width value of 800 points and a height of 300 points and click OK.

Alright, now I'll just go ahead and switch back to the black arrow tool by pressing the V key in order to get rid of all those live shape widgets. And I'm gonna take the line weight up to 12 points, let's say, and I'll change the color of that stroke to this darkish blue. And then I'll go ahead and change the fill color by clicking in this first swatch up here in the control panel, and I'll change it to this lightish blue like so. Alright, so, from that Control Panel, that's all we can do. We can apply one fill and one stroke, and nothing more. But from the Appearance Panel, we can heap on more fills and strokes.

And so, just to clean things up on screen, I'm going to turn off the guides layer, and then I'll go up to the Window menu and choose Appearance in order to switch over to the Appearance Panel, which for me, is located right next door to Layers. So let's say I want to add another fill to this path, then I would drop down to the second icon down here in the bottom left corner of the Appearance Panel. And I would click on it and just like that, I have a new fill, and I can change that fill to any color I like. And in my case, I'm gonna go ahead and change it to this light orange right there, the one that begins with R251, for what's that worth.

Then I can press the enter key or the return key on the Mac to hide the Swatches Panel. Now for those of you who are interested in keyboard shortcuts, you can also add a new fill by pressing control /, that's a forward slash, by the way, and of course that's command / on the Mac. At which point, I get a new fill up here at the top of the stack and I'll go ahead and set that fill to, let's say this medium shade of green. Alright, now let's say I want to add another stroke. Then I could just click on this very first icon in the bottom left corner of the Appearance Panel.

And it's gonna come up with the same line weight I applied before. As a matter of fact, I'm gonna get the same stroke color as before. But I'm gonna go ahead and change that stroke to the darker orange, the one that begins R=241. Now of course, you have a keyboard shortcut for creating new strokes as well, and that's control Alt /, that would be command option / on the Mac, after which point I will go ahead and change the color of this stroke to this dark shade of green. And, of course, I have the option of moving these strokes and fills up and down the stack as much as I like, in which case I'm gonna see new combinations of fills and strokes appear here inside the Document window.

Now one of the most useful applications of multiple strokes is to create multi-stroke effects. So for example, if I was to select this bottom stroke, the blue one, and change it's line weight to 36 points, it would end up sticking out further than the other ones. And if I was to then select that green stroke right there, the one in the middle and change it to 24 points, it would stick out as well. And so now we have, as you can see here, this orange, green, blue stroke effect. The question then becomes what in the world is the point of multiple fills? For one thing, you can turn the fills on and off by clicking on their eyes and this is saved setting, incidentally, along with the Illustrator file.