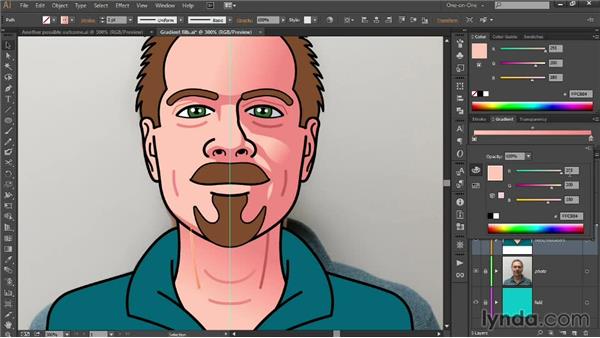 Join Deke McClelland for an in-depth discussion in this video Assigning a gradient stroke, part of Designing Your Own Online Avatar.

…Alright.…Now at this point, you'll notice that we're…starting to lose these neck lines, right here.…That is this stroke and this stroke, as well.…Which is why, in this movie, we're going to go ahead and recolor…these strokes, using a solid color, over here on the right hand side.…And a gradient, over here on the left.…And you'll need Illustrator CS 6 or later to pull this one off.…So I'll start by selecting this right hand stroke…and I'll press the I key in order to…switch to the eye dropper, and I'll click on…this stroke right there in order to lift it's attributes.…

So that one's pretty darn easy.…Alright.…Now press Ctrl+Shift+A, or Cmd+Shift+A on a Mac to deselect that line.…And you can see that it shows up nicely now.…Now I'll press the V key in order to switch to the black arrow tool.…And I'll click on this path outline here to select it.…And I'll click on a stroke.…Which, of course, you can get by choosing Color from the Window menu.…Make sure that your Gradient panel is up as well.…And then, click on this gradient in order to apply it to the stroke.…