Assigning colors to paths inside groups 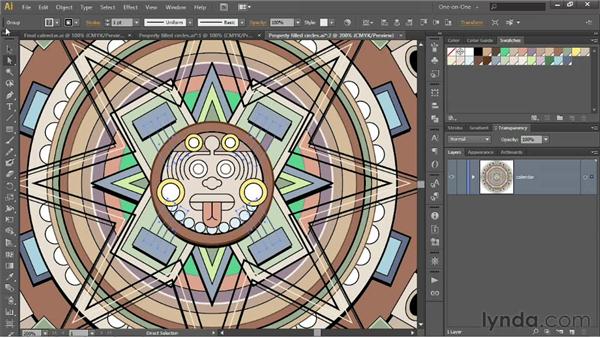 Join Deke McClelland for an in-depth discussion in this video Assigning colors to paths inside groups, part of Illustrator CS6 One-on-One: Intermediate.

In this movie, I'll show you a couple of different ways to assign swatches to path outlines inside of groups, because even as groups afford us a lot of opportunities inside of Illustrator, they present challenges as well. So I am going to go ahead and zoom out a couple of clicks here to take in a little more of the artwork. And notice this series of inset 4 point stars that surround the God's face. Let's say I want to fill the innermost stars independently. So I'd go ahead and click on either one of them. I can see they're grouped together because of the word group on the far-left side of the Control panel.

Well, I want to fill in one of these stars with this light shade of green which goes by the name C=25, M=0, Y=55, and K=0. And it's so auto-named because it was part of that group of swatches that I created automatically. But if I click on that swatch, I'm going to change the stroke because the stroke is the active attribute which is not what I want, so I'll press Ctrl+Z or Command+Z on the Mac to undo that change, and then I'll press the X key to switch from the stroke to the fill and I'll try again. This time around, I'll change the fill, but I change the fill of both of the paths, and that's not what I want.

What if I want to change the fill of the innermost path independently, why then I drag and drop? So whether the path outlines are selected or not, doesn't matter. I'll go ahead and press Ctrl+Shift+A, or Command+ Shift+A on the Mac to deselect them, and then I'll grab this shade of green here, grayish green, and drag it from the Swatches panel. And now I can drop it inside of the star because the star has a fill. So as soon as I drop it, I change the fill of that star. So that's pretty easy, dragging and dropping inside shapes. No problem. However, what do you do if things get a little more complicated? For example, notice these angled bars that connect the blue rectangles to the God's head.

I want all of them to be filled with violet. So what I can do is grab Stone Violet from the Swatches panel, drag it and drop it into any one of those stars, not inside the star because after all, the bars don't currently have any fill, and as a result, I end up filling in the big rectangle in the background. So I'll press Ctrl+Z or Command+Z on the Mac to undo that change. Then, I'll drag Stone Violet, and this time I'll drop it on the bar's path outline and I end up changing that one bar only. So what I need to do instead is switch to the White Arrow tool.

So I'll press the A key in order to get the white arrow, and then I'll Alt+Click or Option+Click on any one of the bars to select the entire path independently of the rest of the group. If I Alt+Click or Option+Click again, I'll select up the hierarchy, so this time I've selected all of the grouped bars. I could see they are a group because of the appearance of the word Group on the far-left side of the Control panel. If I Alt or Option+Click a third time, then I select all of those other angled rectangles that are part of the larger group. That's not what I want. So I'll press Ctrl+Shift+A, or Command+Shift+A on the Mac to deselect the paths, and I'll Alt+Click or Option+Click just twice on any one of those bars to select all eight of them, and then I'll return to the Swatches panel and click on Stone Violet, and that goes ahead and fills all of them.

So you can see in this case, it's a lot easier to select all eight of the bars at a time as opposed to dragging and dropping a color from the Swatches panel eight different times. All right, now I want to fill in the big eight pointed stars around the outside. Again, they're part of a larger group. So I need to perform a drag and drop. I don't even have to bother to deselect the stuff that's selected currently. For example, I want to fill this innermost eight pointed star with this swatch right here, this pale shade of brown which is C=10, M=15, Y=20, K=0.

So I will go ahead and drag it and drop it onto the outline of the star, like so, and that goes ahead and fills it in even though the bars remain selected. Next, I'll grab the sort of grayish blue, which is C=50, M=35, Y=20, K=0, and I'll drag it and drop it onto the next star out, and I'll fill it. Now I have to admit however that this is a precarious way to work. I can tell that my bars have not been affected, because I see that the Stone Violet swatch is still active inside the Swatches panel.

However, because the eight pointed stars are in front, they're obscuring what's going on. So I can't really visually track my artwork. And that's always a dangerous thing. So I'll go ahead and press Ctrl+Shift+A, or Command+Shift+A on the Mac, and that goes ahead and protects those bars from any potential future harm. All right, now for some more dragging and dropping, co-incidentally, Stone Violet is the swatch I'm looking for. So I'll go ahead and drag it and drop it onto the uppermost of these outside star shapes, and that goes ahead and fills in the big star. Then I'll Alt+Click or Option+Click using the White Arrow tool on the lower of the two outside stars in order to select it, and then I'll press Shift+X in order to swap the fill and the stroke, so I no longer have any stroke at all, and the fill becomes black.

And I end up with this final effect which we can see by switching to the wider view. So those are a couple of different ways, dragging and dropping and using the White Arrow tool to assign swatches to path outlines inside groups. But we've got a larger problem here which is this big eight pointed star is covering up the other stuff in the artwork. That's a stacking order problem that we will begin to address in the next movie.

11/21/2012
Join author and industry expert Deke McClelland as he teaches you how to take advantage of the next level of dynamic features in Adobe Illustrator CS6. This installment of his Illustrator CS6 One-on-One series starts by showing you how to effectively manage layers, clipping groups, and swatches, so that you can easily swap out colors and content. Deke then explains how to create customized strokes and patterns and build complex gradients with transparency and dynamic effects, and then apply these features to paths, groups, and editable text to create professional-quality artwork. He also highlights some of the most popular features in Illustrator: Live Paint and all ten of its Pathfinder operations. The final chapters show how to prepare your projects for print and save them for distribution on the web.
Topics include: