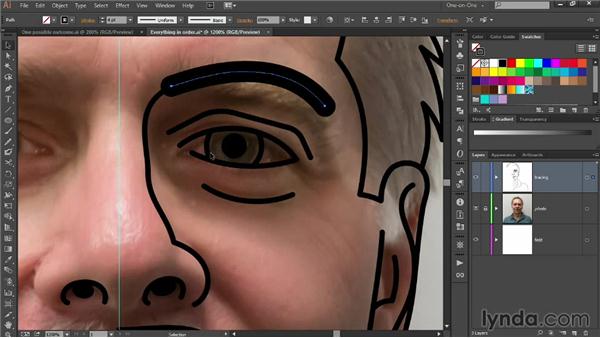 Join Deke McClelland for an in-depth discussion in this video Assembling and exaggerating eyes, part of Designing Your Own Online Avatar.

…In this movie, we're going to assemble these various path outlines that…are supposed to represent the right eye into actual eye shapes.…So, I'll go ahead and zoom on in by…Ctrl+Space bar clicking, that's Cmd+Space bar clicking on a Mac.…And then, you want to switch to the Black Arrow tool, which you can get…by pressing the V key, and go ahead and select this eye shape right…there, and press Ctrl+C, or Cmd+C on the Mac, in order to copy it,…and the reason is, that we need to create an intersection with the iris.…

And we're going to lose this eye shape in doing so.…Now, Shift+click on the circular iris to select it as well.…Go up to the Window menu and choose the…Pathfinder command and then, inside the pathfinder panel, you…want to go ahead and click on Intersect in…order to create this version of the iris right there.…Now I'm going to zoom in even further and I'll press Ctrl+F or…Cmd+F on the Mac in order to paste the eye shape in place.…Now I want to divide the eye into two pieces.…

So, I'm going to press the C key to switch to the Scissors tool.…