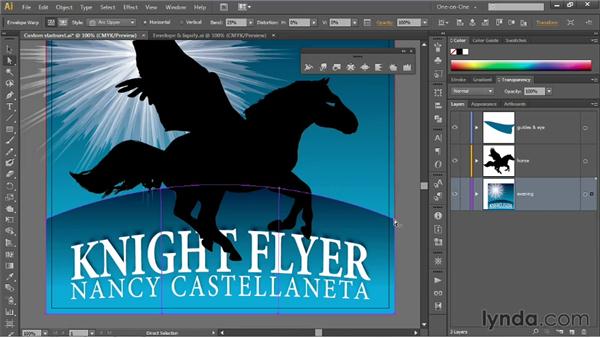 In this movie, I'll introduce you to envelope distortions, which we'll use in order to create this rolling grass effect. It's also affecting the live editable type as well, as you can see right here. So I'll go ahead and switch over to our illustration in progress and then I'll select this gradient rectangle toward the bottom of the document and I'll Shift+click on the text to select it as well. Now we're going to create an envelope style distortion based on a common warping effect. So just to give you a sense for the differences between the warp styles inside of illustrator, I'll go up the Effect > Warp > Arc Upper. And I'll go ahead and dial in a bend value of 25% and turn on a Preview checkbox.

And you can see, that that goes ahead and dynamically bends both the rectangle and the text on the fly, which is a really great thing. But when you are applying a dynamic war, you only have so many styles to choose from. What if you want to use this Arc Upper Effect as a jumping off point for your own custom distortion. In that case, you need to apply an envelope style distortion, which is also dynamic by the way, just a little more difficult to use. So I'll go ahead and cancel out of here. And I'll go to the Object > Envelope Distort > Make With Warp, which as you can see, Adobe has given a keyboard shortcut of mash your fist W.

And as soon as I bring up this dialog box here, it's very much like what we were seeing a moment ago. It'll come up with Arc selected by default, just so happens I last applied Arc Upper and I went ahead and set the bend value to 25%, as we just saw a moment ago. Now I'll turn on a Preview checkbox and we end up achieving the exact same effect. Now click OK in order to apply that effect to the illustration. And so the great thing about this style of warp is that we can customize it using the White Arrow tool. So I'll go ahead and scroll down a little bit here, and I'll press the A key to switch to the White Arrow.

And notice that we have a sequence of anchor points around the envelope. So basically what Illustrators done is it's taken the rectangle in the text and placed it inside of an envelope. And we now have the option of modifying the shape of the envelope and that will affect its contents and kind. So I'll go ahead and click on this anchor point right there. And it's very important that you click on it first to select it. You can't just start dragging it. And then I'll drag it upward while pressing the Shift key until I get to about this point, and I'll drag this control handle down. So what we're modifying, by the way, is a mesh, just like the mesh that we saw back in the gradient mesh chapter.

The only difference is that it affects the shape of the stuff inside of it, not the color. Now, I'll go ahead and drag this anchor point down to about here. And it's not really important that you do exactly what I'm doing, but it is a little hard to predict the results. You will have to play around in order to get effects that look something like mine. And now I'll go ahead and drag this down but unfortunately I dragged down an unfortunate anatomical detail here inside the horse. So I'll go ahead and press Ctrl+Z or Cmd+Z on the Mac to undo that change.

And I'll lock down the horse layer like so. And then, I'll go ahead and fish around for an anchor point on my envelope. And if you can't find it, all you need to do is press Ctrl+Y or Cmd+Y on a Mac, and then you'll actually see the shape of your envelope on screen. And this is the point I'm looking for. And now I'll drag it down to here, and I'll go ahead and drag the control handle up like so. So I'm trying to create a kind of rolling hill effect. And I'll press Ctrl+Y or Cmd+Y on a Mac so you can see the effect that that has on the contents of the envelope. And I'll go ahead and drag this guy upward and drag this control handle down and I'm grabbing the star this time, which I definitely don't want to do. So I'll twirl open the evening layer and I'll lock down that blend as well. All right.

Having locked down everything I think might get in the way, I'll click here on this curving envelope segment, and then I'll grab that anchor point and drag it down to this location. So we're just trying to get a general rolling hill effect. You can mess around with it a little more if you'd like. And if you feel like the text is starting to bend inwards, which sometimes it looks like it's trying to do, then you can just drag one of the anchor points out a little bit, as I've done here. All right, so that's how you apply a custom envelope style distortion based on a pre-existing warp effect. In the next movie, I'll show you how to modify the contents of the envelope, so that, for example, the text isn't nearly so squished.

4/30/2013
The fourth in a series by industry-pro Deke McClelland on the premiere graphics creation application, Adobe Illustrator, this course shows you how to become a more efficient, exact, and creative designer with the advanced tools in Illustrator. Maximize your productivity with tools such as Smart Guides to precisely align your artwork, symbols that help you reuse it, and pattern brushes that allow you to tile it across the screen. Plus, learn how to add special creative touches to designs with the Gradient Mesh feature, great for creating photorealistic airbrushing effects; the Liquify and Envelope tools; the layered transparency you can achieve with opacity masks; and 3D effects like live, editable 3D type.
Topics include:

Q: In the "Assigning colors to mesh points" lesson, I cannot pick up the color of the visible tracing/photograph layer with the Eyedropper tool. What am I missing?

A: Make sure the template file is embedded in your file, not just linked, and try to sample the color again.