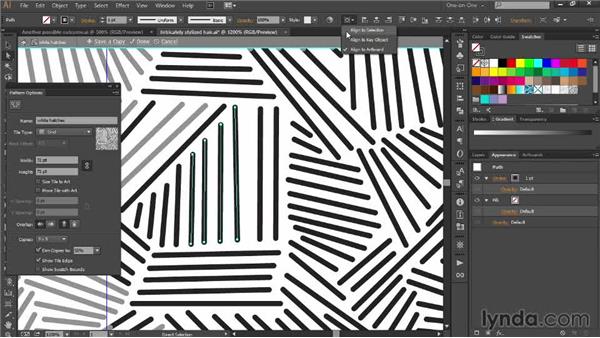 Join Deke McClelland for an in-depth discussion in this video Adjusting crosshatching to suit filled paths, part of Designing Your Own Online Avatar.

…Alright, now that we've assigned the cross hatch pattern to the various…hair paths, we have a better sense for how it's going to look.…And, and as you can see here I've got some too-tight regions, like these…guys right there, and then I have some areas that are too loose as well.…And, so, what we're going to do in this movie is modify…the cross hatch pattern, so it looks better inside the path outlines.…And, of course, we're going to change all the lines to white as well.…So if you're working along with me, go ahead and press Ctrl+Shift+A…or Cmd+Shift+A on a Mac, just to make sure nothing is selected.…

And then double-click on the white hatches swatch here in…the Swatches panel in order to enter the path editing mode.…And, you can see that we've got some very tight path outlines here.…I'm going to select this guy.…With my black arrow tool right now And get rid of it.…Then I'm going to press the A key to switch to my white arrow tool and I'm…going to make this guy shorter and I'll Alt-click…on it in order to select the entire thing.…